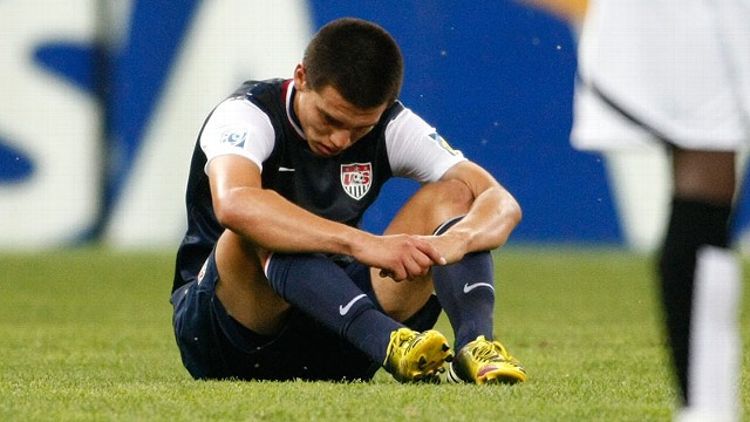 Three times, the United States men’s national team has faced Ghana with a chance to advance in a World Cup. Three times, it has failed.

The Black Stars bounced the Americans from Germany in 2006 and from South Africa in 2010, while the Black Satellites — the nickname given to the country’s Under-20 side — saw off the Stars and Stripes from the youth tournament on Thursday. Ghana won, 4-1, in Kayseri, Turkey, a 5,000-year-old city of roughly one million located exactly in the middle of the country.

As with the senior-side matches, Ghana’s U-20 team was a little stronger, a little quicker, and a little more organized than the U.S. anticipated, and overall it was just the better side on the day. Ghana opened up a two-goal lead on tallies from Frank Acheampong and Ebenezer Assifuah. American Shane O’Neill briefly made it 2-1 in the 69th minute, but the U.S., which needed a victory to have a chance of moving on to the knockout round, conceded another to Assifuah and one to Kennedy Ashia. Head coach Tab Ramos’s squad finished the tournament in last place in Group A, a disappointing result but perhaps always the most realistic one after it was paired in a foursome with Spain, France, and the 2009 champions.

And really, these tournaments aren’t so much about the results on the field as they are about being on it at all. The American youth failed to qualify both in 2011 and for the 2012 Olympics, and although the red, white, and blue didn’t succeed on the field in Turkey — losing 4-1 to La Rojita before posting a relatively impressive 1-1 draw with high-powered Les Bleus — in many ways they had already won just by getting there.

From the beginning — of the tournament, generally, and of Thursday’s game, specifically — Ramos found himself hamstrung by the absence of players who were not in Turkey because of injury or choice. John Anthony Brooks, the brilliant German American center back who plays for Hertha Berlin, wasn’t ready to decide his international future, and Birmingham City center back Will Packwood suffered a terrible leg break in January. (Watch it here if you must.) Walker Zimmerman, the third man on the depth chart at the position, had been dealing with an injury, and Ramos left him with FC Dallas, much to the surprise of his club coach.

The center back solution against Ghana was team captain Caleb Stanko and O’Neill, both of whom play central midfield for their clubs. The former started the first game of the tournament, but Ramos dropped him against France before reinserting him into the Starting XI against Ghana. O’Neill missed the opening match because of a red card he picked up in the CONCACAF Championship final, but he looked fine in the second tilt. The duo performed about as well as one might expect of two young men playing out of position in the biggest game of their lives, which is to say, OK, except for a couple of massive errors.

Ghana’s first goal came when Stanko (and Wil Trapp) failed to clear a ball in the box. Acheampong, nicknamed “Messi” for some ridiculous reason, finished easily. These sorts of lapses happen when players on a team are unfamiliar with each other and are trying to play too prettily. Balls that should be booted into the stratosphere aren’t, and the attackers capitalize. Mistakes were made all tournament long, but you hope the experience benefits the young players going forward. You play, you learn.

You also get to watch Cody Cropper be a hero time and time again. The U.S. goalkeeper, who joined Southhampton in 2012, is one of the best young shot-stoppers in the world, and he showed it in Turkey. He’s long and lanky at 6-foot-4 but also possesses impressive quickness and reaction speed. Like all young netminders, he needs better positioning and could command the game better, although he’s definitely working on his “what were my defenders thinking?” arm flail patented by Tim Howard. Cropper should have done better on the fourth Ghanian goal that went though his legs, but he more than made up for the mistake earlier in the match and against France.

Given the lack of defensive depth Ramos had to employ, the back line was going to be serviceable at best. The attack needed to make up for the deficiencies, but it failed to do so. Mario Rodriguez, recently released by Kaiserslautern, especially struggled. The former Los Angeles Galaxy product almost seemed unwilling or unable to pull the trigger, shrinking in the biggest of moments. (He pulled a similar routine in the U-17 World Cup.) Jose Villarreal can score magical goals but made little to no impression in Turkey. And while Real Salt Lake’s Luis Gil showed flashes of his “next big thing”–ness in orchestrating from midfield, we’re getting to the point where it’s time to remove the “next” from that label. It hasn’t happened yet, and he needs to do more. Daniel Cuevas did plenty when he got the chance but was used as a substitute throughout. One bright spot was the play of rapidly rising Seattle Sounders right back DeAndre Yedlin, and also his combination play with Oscar Sorto.

If you had to put a grade on the tournament, you’d give it something in the B-minus/C-plus range. It wasn’t the 2007 team that featured Freddy Adu, Jozy Altidore, and Michael Bradley — the last American U-20 squad to reach the knockout stage — but there was talent on the field and more waiting in the wings. Seven of the starters against Turkey play in MLS, and we’re beginning to see the positive effects of the league’s renewed commitment to youth development. As with everything in American soccer right now, the U-20s are trending in the right direction, but they are far from where they could, or perhaps should, be.

Around the time U.S.-Ghana ended, the Confederations Cup semifinal between Spain and Italy kicked off thousands of miles away in Brazil. The American senior team wasn’t at the tournament, which acts as a precursor to the World Cup, because it fell to Mexico in the final of the 2011 Gold Cup. That result, which cost Bob Bradley his job, meant the U.S. wouldn’t get a chance to defend its second-place Confederations Cup finish in 2009. The next Confed Cup takes place in four years. Bet on at least a few of the players who lost in Turkey to help the Americans reach that tournament. Hopefully, Ghana will not.

Filed Under: Noah Davis, US Soccer