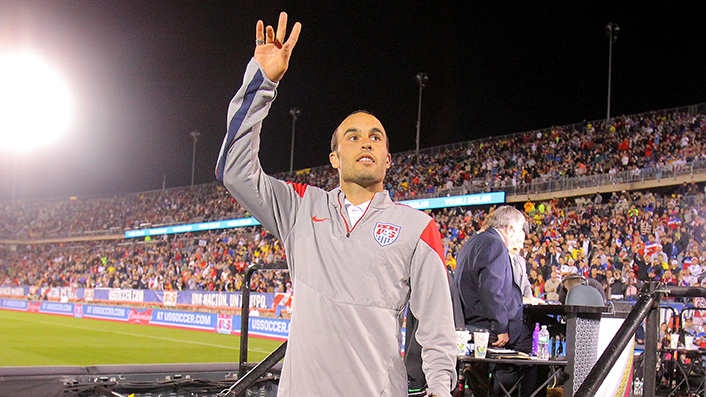 Rentschler Field in East Hartford, Connecticut, is a throwback to another time in the history of American soccer. The concrete stands, with section-long, aluminum-backed bench seats; the half-full stands at kickoff; the faded football yard lines peaking through the grass, with the “American Conference” logos clearly visible on the 20-yard lines.

It’s fitting that on a chilly Friday night, Landon Donovan ended his career with the U.S. national team there.

Plenty of American players came before the Los Angeles Galaxy forward, and many will follow him, but there won’t be another who embodies the era in which U.S. soccer grew up more than Donovan. He helped the USMNT reach the quarterfinals of the 2002 World Cup. He was a catalyst for the transformation of MLS, from a league on the brink to a sustainable, growing entity. He was the reason Ian Darke shouted, “Go, go, USA!” And he’s why Michael Bradley and Clint Dempsey returned to North America to play their club football. Over the last 15 years — with one notable exception — he was there for it all.

There was Donovan, against Ecuador on Friday, with about 30 minutes remaining in his national team career, captaining the squad one last time. He paired with Jozy Altidore up top. Altidore is nearly a decade younger but Donovan has always had a connection with him on the field. The duo showed it against Ecuador, with the U.S. goal coming after Donovan sent a long cross to Altidore, who knew exactly where it was heading. The Sunderland forward bungled the volley but the ball eventually found its way to Mix Diskerud, who finished with precision.

This summer in Brazil, Diskerud wore the No. 10 jersey. For a long time, that was Donovan’s shirt, but national team coach Jurgen Klinsmann left him off the World Cup roster. It was certainly a decision for which no one was really prepared — not the players, not the media, not the fans. Donovan was the face of the U.S. team — the relatable touchstone. Then he was gone, left off the squad by a coach who once went against his superiors to bring the forward to Bayern Munich, Germany’s biggest club.

The rift between the two men, caused by the failure at Bayern, never healed. It was a subplot leading up to and during the World Cup, and again this week. U.S. Soccer Federation president Sunil Gulati, not Klinsmann and not Donovan, was the one who made the sendoff happen. The tale reached its absurd conclusion following Friday night’s match when Klinsmann said his voice mail and his son’s apology email failed to reach Donovan.

Klinsmann — who has a mandate to remake the U.S. squad in his image — clearly wanted to move beyond Donovan, who he thought represented the perceived softness of American soccer. U.S. soccer supporters spent a decade hoping that Donovan would become a star like Messi or Rooney, or, hell, Maradona or Pelé. They only truly embraced the attacker when he was left out of the World Cup.

Donovan was not the star we wanted, but he was the star we deserved. He carried the game as far as he could. He was the best, most visible player the U.S. had, as the program moved from half-empty stadiums to soccer-specific venues, multimillion-dollar contracts for American stars, and a domestic league that averages higher attendance per game than the NBA and NHL. Donovan didn’t make that happen on his own, but his stardom helped facilitate it. A reluctant star can still be vital, as long as he keeps showing up.

Donovan showed up, over and over again. He ends his national team career with a record 57 goals and 58 assists. He set the MLS career goals and assists mark earlier this year. He scored more times at the World Cup than anyone in CONCACAF history, and should retire with six MLS Cup victories, the most all time. While Graham Parker makes a strong argument that Donovan’s legacy will be written by what he does in the future, the record books are all his.

Friday night, fans came out to show their appreciation of Donovan’s efforts. Sometime just after the half-hour mark, one of the stadium staffers was talking to a coworker: “I can’t remember the last time I saw this many people in this place.”

A few minutes later, Donovan walked off the field, putting a warm-up jacket on. Just outside the now-packed concrete stadium, the red, orange, and yellow leaves fell to the ground as the trees prepared for another season. Across the country in Seattle, nearly 56,000 fans arrived to watch a match.

Donovan saluted the adoring crowd, smiling that crooked smile that appeared everywhere from the cover of the New York Post to Samsung ads. He had done his part.