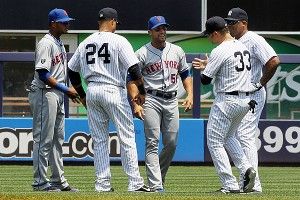 When last we checked in, the two best divisions in baseball had faced off 27 times in the interleague hiatus, with the AL East holding a slim 14-13 lead over the NL East. Over the past week, the gap has widened. It’s now 29-22 in favor of the American Leaguers after a dominant seven-day stretch that saw the Yankees sweep the Nationals in a battle of the top dogs. On June 7, before this whole thing began, I wrote a piece speculating that if the AL East could finish interleague play with all five teams above .500, there was no good reason to think they couldn’t maintain that historic pace for an entire season. Now here we are, three days from that end point, and what’s the worst record in the division? Toronto, at 35-34. They’ve survived and prospered against the other best division in baseball, and theoretically it will only get easier from here. We finish this week with a solid five-against-five, 15 games pitting East against East in a last hurrah that I’m starting to think nobody cares about but me.

The Pirates third baseman is 9-25 with five home runs in his last six games, making him the hottest hitter in baseball. He’ll be facing the likes of Doug Fister, Max Scherzer, and, best of all, Justin Verlander on Sunday. Also, you should take this opportunity to enjoy the 36-32 Pirates, and the 7-2 A.J. Burnett, before they collapse into the grimy Steel City sunset.

It’s too early for a do-or-die series, right? I know this intuitively, but I can’t help but think we’re seeing two teams at a crossroads. Both have nice run differentials (+40 for the Sox, +22 for the Braves), but both are buried in the middle of very good divisions. Still, each team is coming off an important triumph; the Braves breaking up the Yankees’ 10-game winning streak to take the series and the Sox sweeping the Marlins. I know it’s only June, but there’s too much strong competition in the Easts to tread water much longer. You have to imagine that the loser of this series, finishing interleague play on a low note, will be seriously frustrated and mentally fatigued … especially if it’s the Red Sox, who aren’t having the best time of things in the clubhouse at the moment.

My campaign to call attention to the dastardly MLB blackout policy continues. However, I have to wonder: Since the Orioles and Nationals are both blacked out for me, do they cancel each other out? Will I actually see this game, by some crazy loophole? Anyway, good series with a particularly good matchup tonight between Jordan Zimmermann (2.92 ERA) and Jason Hammel (2.87 ERA), but no Stephen Strasburg or Gio Gonzalez means no top five. Still, the Nationals have to keep proving they can win beyond their top two starters, and the Orioles are a good test. Note also that the O’s have lost three straight. Every time we think they’re about to collapse, they prove us wrong, but the reckoning has to be coming, right?

He’s a top 10 pitcher by FIP, he’s got 10 wins and a 2.80 ERA, and he’s a mighty 6-foot-5, 250. So why, before I just searched his image on Google, did I have no idea what he looked like? Am I a bad baseball fan? Probably, but here’s my defense: While he’s not technically a rookie, having pitched 34 innings last season, he is pretty new to the scene. He only got a shot at the rotation when Chris Carpenter got hurt, and he proceeded to win his first six starts. Now he’s a legitimate All-Star candidate and an emerging talent. It’s probably about time I watched him pitch.

OK, so technically David Price only pitched 3.1 innings as a reliever in the 2008 Series, while Hamels was the MVP, but still …bad blood. They’re both having nice years, with ERAs just above 3.00 and solid records. And while Tampa Bay seems poised for another playoff run in the difficult AL East, the Phillies are having their first bad year in what seems like a decade, sitting at the bottom of the NL East with a surprisingly poor 309 runs allowed. They need Roy Halladay back, and they need Cliff Lee to start being a little less average.

The Indians, with their -31 run differential, are now in first place by a half game in the AL Central. They just won three straight games versus the Reds, one of them in walk-off fashion against the great Aroldis Chapman, and now they get to beat up, presumably, on the Astros (their future division-mates, no less). Anytime a team has a good record (36-32) with a bad differential, I like to check how they’ve fared in games decided by two runs or less. Sure enough, the Indians are 21-10. For anyone out there not into baseball stats, let me translate that record for you: The Cleveland Indians are all heart, grit, and gumption. We need you on our side, Tribe.

The Freeway Series? The La-La Skirmish? The Fault Line Fracas? The Vanity Affair? Whatever you want to call it, it’s a baseball series between two teams from the same city (sort of), which can only happen in three places in our great country. Keep an eye out for Garrett Richards on Sunday. The Angels pitcher has allowed two earned runs in 20 innings since taking over as a starter in early June. Anaheim is on a two-game winning streak, while the Dodgers are in dire straits after somehow getting swept by the Athletics. Interleague play hasn’t treated the Blue Crew kindly; they’re now 5-7 since it all began on June 8. Time to right the ship. Also, if you’re into the whole West Coast scene, here’s an article speculating on whether the Angels can catch the Rangers, or the Giants can catch the Dodgers.

Remember that one episode of Louie where he drops his girls off with their mom and has big plans to exercise and take advantage of his free time? He ends up eating pizza and ice cream for two days and has a bad pot-smoking experience with his neighbor. He also adopts a dog that dies. My girlfriend leaves for a weekend in New York tonight, and I’m promising myself all sorts of progress in her absence. But I have a bad feeling that the Louie formula is on the horizon (minus the dead dog, I hope). I shouldn’t be left alone for any period of time, but I’m at least grateful that I have this awesome pitching matchup to keep me distracted for one night. This is no. 1 versus no. 4 in terms of FIP in the majors, and it would be top billing any other week … in fact, this is the second week in a row Chris Sale has been robbed.

Time to get out on that limb: This is the best game of the season. First, there’s no pitcher more exciting right now than R.A. Dickey. He’s pitched two straight one-hitters, set the Mets record for most consecutive shutout innings, compiled an 11-1 record with a 2.00 ERA, and continues to revolutionize what we think we know about the knuckleball. Any game featuring Dickey, with his inspirational story as a backdrop, is automatically very exciting.

But let’s mix in a few ingredients; how about the fact that this is a Subway Series game, where Dickey is shouldering the weight of a 40-year Mets inferiority complex against the greatest sports franchise of all time? How about the fact that CC Sabathia, at 9-3 coming off a complete-game 10-strikeout effort, is his opponent? How about the fact that Mets closer Frank Francisco called the Yankees “chickens”?!?!?! Gauntlet laid, Yankees! (It also inspired this fantastic front cover of the N.Y. Post, which, taken with the back cover, might be the high-water mark of that great publication.) This is the Sunday night game on ESPN; rev up your subways and set a course for Queens.

The Top Story Lines at the NHL Draft