The Top Story Lines at the NHL Draft 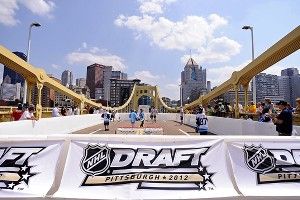 For many of the teenage prospects gathered in Pittsburgh for tonight’s NHL draft, the last couple of days have been designed to show off some of the best of what this year’s hockey-mad host city has to offer — even if the itinerary clearly hasn’t included a stop at Primanti’s. Asked on Twitter if he had been to the famed heart-attack-on-a-sandwich joint, goalie prospect Malcolm Subban responded:

@BootsNBrawn not sure where that is but Chipoltle/Qudoba are our spots right now.

Still, there were other local sights and sounds to take in. On Thursday, some of the top-ranked young players held a media availability session not in the standard location — hotel ballrooms, arena bowels — but rather on a boat, where they squinted into the sun as they spoke. And later in the day, they got the chance to take batting practice before a Pirates game at gorgeous PNC Park.

None of them were able to match the homer Sidney Crosby dinged at PNC in the fall of 2010. (USA Under-18 Team’s Jacob Trouba came closest.) Nor will they be anywhere close to matching the kind of buzz Crosby received in 2005, the year he was selected by the Penguins. This year’s draft class is solid, but it’s not at all flashy; if it was a team, it would be more akin to the St. Louis Blues than the Pittsburgh Penguins.

Still, it ought to be an interesting evening. While I’ll leave the nitty-gritty, “Here’s who the Florida Panthers will take with the 23rd pick” projections to the people who have spent years watching players develop (if you’re interested in that sort of thing, I highly recommend you begin by following Corey Pronman on Twitter), here are a few items of note going into tonight’s draft.

What Will Edmonton Do?

For the third straight year the Edmonton Oilers have the draft’s no. 1 pick, having out-Ping-Pong-balled the inferior Columbus Blue Jackets.

On the surface, the Oilers’ decision seems like an easy one. Many regard this year’s draft class as having one clear elite standout in Nail Yakupov, the 18-year-old Russian who has spent his past two years playing with the OHL’s Sarnia Sting. As scouting service Red Line Report put it: “We feel that Yakupov is in the top tier by himself, followed by a second tier of seven guys who could be placed in any order.”

But nothing is ever easy in Edmonton, which now faces a classic draft conundrum: Best player available? Or fill a specific need? With their past two top picks, the Oilers selected forwards — Taylor Hall in 2010 and Ryan Nugent-Hopkins in 2011 — and as an organization they feel they have a much bigger hole on the blue line than they do up front.

As a result, they are said to be keenly interested in Canadian defenseman Ryan Murray, who was invited to play for Team Canada in the IIHF World Championships in May. Should they opt to pass on Yakupov, they might decide to take Murray at the top slot, or try to trade down with the likes of Columbus or, more likely, Montreal and pick him up there instead. There’s also the chance they’d move even further down and target defenseman Griffin Reinhart. But doing either could turn out to be a risky move, optics-wise, for the embattled Oilers. After all, their current threepeat is not exactly the one they desired.

The Fireworks May Have to Wait Till July

It might not be NHL newcomers who make the biggest headlines today, but rather the league’s more seasoned players. Several high-profile guys — from Vancouver’s Roberto Luongo to Columbus’s Rick Nash to Anaheim’s Bobby Ryan — are being dangled as trade bait this offseason. Any of these possible deals have the potential to overshadow the night’s main event.

Draft day is frequently a big one for balls-out transactions; recall last season, when the Philadelphia Flyers notably unloaded Jeff Carter and Mike Richards. But while there’s potential for some big personnel decisions to take place over the next several hours, there’s also a growing possibility that this could be a whole lot of “hurry up and wait.” With notable free agents like Zach Parise and Ryan Suter set to hit the open market on July 1, many teams — both buyers and sellers — could choose to see how those situations shake out before making big moves of their own.

One of this NHL season’s more annoying side plots was the ongoing scrutiny of Russian players. Alex Ovechkin was variously accused of past steroid use and lambasted for skipping the All-Star Game, while his teammate Alexander Semin was the motherland’s most criticized son for the majority of the season — that is, until Alexander Radulov entered the picture and, unfortunately, lived down to expectations.

The hockey world’s ever-simmering xenophobia has bubbled up even more of late, particularly surrounding the draft, as several players with Russian ties have seen their motivations questioned and their stocks slip. Perhaps the best example of this phenomenon is Mikhail Grigorenko, who earlier in the season was a presumed coin toss with Yakupov for the 1-2 slots but has now fallen considerably in some projections based on questions about his “compete level,” shadowy rumors about his real age, and fears that he might end up choosing Russia’s KHL.

Such fears of KHL defections have become a big part of the conversations around Russian players lately, particularly in light of Radulov’s situation and the cases of 2008 sixth overall draft pick Nikita Filatov and the Washington Capitals’ 2010 first-rounder Evgeny Kuznetsov, who has opted to remain (lucratively) in the KHL for the time being. (Another 2010 first-round pick, Vladimir Tarasenko, announced that he would leave the KHL to join the Blues next season.)

It’s a concern, sure — the NHL can’t compete with the money the KHL throws at players, and many people legitimately would rather play in their home nation. Maybe Grigorenko will end up going back to Russia. Who knows? But the hysteria over this situation has grown to the point where Yakupov, who already chose to come to North America to play in the OHL for the past two seasons to better position himself for the NHL, has been harangued with inquiries about his commitment to joining the league.

And even more absurdly, top prospect Alex Galchenyuk has had to answer question after question about the potential that he will go play in Russia — this despite the fact that he was born in Milwaukee, has suited up for Team USA in (non-IIHF sanctioned, to be fair) international play, and, as Chris Peters noted in a great explainer on Galchenyuk’s situation, has flat-out said, “I consider myself an American.” Next question, please.

Want to feel old? Ulf Samuelsson, Stephane Matteau, and Derian Hatcher all have sons that are draft-eligible this year. So does Al Iafrate — he of the greatest hairstyle-slapshot combo in the history of hockey — and Paul Reinhart, whose boy Griffin will likely be the earliest son-of-a-former-gun selected; some projections have placed him as early as the top five. (Speaking of which, I should note that touted prospect Filip Forsberg is, sadly, not the son of Peter.)

Several current players have relatives who are up for grabs: P.K. Subban’s brother, the aforementioned burrito-eating Malcolm, may be one of a few goalies who could go in the opening round. (Last year, a goalie wasn’t selected until the 38th pick in the second round.) Rangers teammates Derek Stepan and Brian Boyle have a cousin and a brother, respectively, on the board. And in keeping with time-honored NHL bylaws, there’s a Sutter available.

My favorite bit of insight from the NHL Network’s mock draft show was analyst Peter Loubardias saying, about Canadian defenseman Matthew Dumba, “he’s got a heart as big as a bathtub” … Backhand Shelf explains why you should be rooting for Czech prospect Radek Faksa, who left home at age 11 to pursue his hockey dream … I’m half obsessed with watching footage from the prospect combine, and it half creeps me out … Like Subban, Galchenyuk has opted for a diet of Chipotle while in Pittsburgh. Somewhere, a Primanti Bro shakes his head sadly, coleslaw dribbling down his chin.