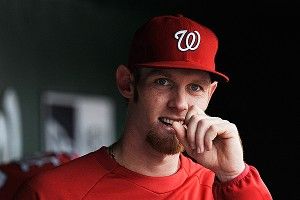 It’s easy to sit here, from a neutral vantage point, and say the Nationals are doing the right thing by pulling the plug on Strasburg before the playoffs. And they are, I think. Why risk an injury to a franchise player for the uncertain hope of winning a championship? If they truly believe that exceeding the innings limit would damage him in the long term, then yeah, they can’t take the risk. Smart move, Nats. But now imagine being a Nationals fan. Your team is guaranteed its first winning season in franchise history, you’ll almost definitely make the playoffs, and your management is telling you that the ace (OK, co-ace) of the staff can’t pitch. He’s not hurt, he’s not old, and he’s not struggling. This is the guy who is annihilating the rest of the league in strikeout rate (11.23/9, and the runner-up is teammate Gio Gonzalez, with 9.5/9), is a legitimate top-five Cy Young contender, and seems to keep getting better as the season goes along. And now he can’t pitch with a World Series on the line? That’s brutal, and I understand if emotion gets the best of Nationals fans and they start to think: Wait a minute … why isn’t this worth the risk? The club is damned if they do, damned if they don’t. But I can’t help but put myself in the fans’ shoes, in Game 3 of the Divisional Series, when Edwin Jackson is pitching and Strasburg is on the bench, a designated cheerleader.

9. Pitching Matchup of the Week: Beckett vs. Lincecum (Friday, SFG-LAD)

This is the first time I’ve chosen the pitching matchup of the week based on comic appeal, but I couldn’t resist. It’s the classic underachievers’ duel! The difference is that while one is young and likable and maybe kinda sorta getting things together over his last seven starts, the other is a miserable old crank whom even his teammates despise. Unfortunately for good people everywhere, Beckett is experiencing what I like to call the Youkilis Effect, which is when an ex–Red Sox player regains his mojo immediately after leaving Boston. In his two starts with the Dodgers, he’s allowed just four runs over 12⅓ innings, striking out an impressive 15 hitters. The truth is that both pitchers seem to be finding their way late in the season, and it’s pretty great that they meet with so much at stake. The Dodgers trail the Giants by 4½ games in the West, and a series loss here would probably doom them to a wild-card chase.

The drama is gone in the NL Central, and the Reds actually get to enjoy the final month of the season. The 8½-game lead is safe, and this next month should be the most fun Reds fans have had since the ’70s. Jay Bruce is tearing the cover off the ball (five home runs, 12 RBIs in his last six games), Johnny Cueto is a strong Cy Young contender, and the bullpen is the best in baseball. Also, they’re playing the Astros, so this whole weekend is like getting your dream job, your dream house, your dream girl, and also getting to rub it into your high school classmates at a reunion. Provided your classmates are now homeless.

This is easily the funniest story of the year. Braun now leads the National League in home runs and RBIs and slugging and wOBA and WAR and OPS and runs created. He’s second in total runs and top 10 in stolen bases and batting average and OBP. Andrew McCutchen is a close second, but there is no longer any doubt who’s leading the NL MVP race. And yet … they can’t give it to him, right? He dodged a PED suspension on a weird technicality and supposedly represents everything baseball is trying to put in its past. You just know the voters are praying for someone to overtake him in the major statistical categories so their eventual snub is less glaring. Instead, the opposite is happening, and Braun is putting distance between himself and every other contender. It’s all very unfortunate, and very funny.

Fair warning — over the next two items, I’m going to reveal my love for Cy Young races. To me, it’s one of the best parts about September, just a slight step below the actual playoff chase.

It’s down to five in the NL, and it’s very close — R.A. Dickey, Gio Gonzalez, Johnny Cueto, Clayton Kershaw, and Stephen Strasburg, who probably won’t have a shot to win because of his innings limit. Gonzalez picked up his league-leading 18th win on Wednesday and won’t pitch this weekend. His argument consists of the wins, the second-highest strikeout rate, and an incredibly low home run rate. Dickey has a great story: 18 wins of his own, the second-lowest ERA, and the most innings pitched per start. He’s also off this weekend, BUT, he and Gonzalez meet on Monday in a game that could easily propel one of them into the lead. Cueto pitches Sunday against the Astros with a chance to lower his league-best 2.58 ERA. He has a low home run and walk rate as well, but because his strikeouts and FIP aren’t spectacular, his candidacy is built on ERA and wins (17 at the moment). Last is Kershaw, the current strikeout king, who has a strong 2.79 ERA and a tendency to go deep into games. His record is average at 12-8, but if he can keep the strikeout lead over Dickey and Gonzalez and lower the ERA a couple points, he’ll have a strong argument as well. He faces Barry Zito in the Sunday-night ESPN game.

Felix seemed to have in his pocket just a week ago, but a rough outing against the Angels last Saturday has brought David Price and Justin Verlander back into the mix. Price, who faces Yu Darvish on Saturday, is the only one with a chance at 17 wins. He’s also just .03 point away from Felix’s league-leading 2.51 ERA. Throw in the fact that he has a higher strikeout rate than Felix, and people perceive him as leading Tampa’s charge back into playoff contention, and he’s only a great start away from taking over the lead. Verlander, meanwhile, is the league leader in strikeouts and strikeout rate, and he recovered from a shocking meltdown at Kansas City with an eight-inning prime-time gem against the White Sox last Sunday. His ERA has come down to 2.73, and like Price, he’s just a great start against L.A. on Saturday from vaulting into the lead. But as of now, Felix is holding onto his lead with a league-best 2.51 ERA and 2.81 FIP. With a lower home run and walk rate than the other two contenders, plus a respectable 13-6 record, this is his to lose. He goes tonight against Oakland, and every good start closes the door just a bit more.

Sorry, eight home runs and 16 RBIs in your last seven games? Am I reading that correctly? Really? Including two against my beloved Yankees last night? Seriously? Am I going to keep asking questions until I go insane? Will I talk more about this series in a second? Yes?

Playoff and Cy Young implications abound. The Dodgers are just 4-6 since the Big Ol’ Trade went down, while the Giants have responded with a 6-3 tear. As mentioned before, the Dodgers can’t win the division this weekend, but they can certainly lose it. I heard last night on CNN that Republican operatives are starting to move out of Michigan because of iffy poll numbers and are pooling their resources to focus on states they have a better chance of winning. The abandon-Michigan strategy might have to be adopted by the Dodgers after this weekend. Any extension to the current 4½-game gap, and it’s time for the Dodgers to forget the NL West and start setting their sights on the wild card.

Highlighted by the Price-Darvish matchup on Saturday. A slight fade by Oakland, which has lost three in a row, turned a suddenly interesting AL West race back into a reasonably sure thing, but Tampa is locked in a bitter fight for the AL East and, of course, the wild card. The other two pitching matchups, Hellickson-Holland and Shields-Harrison, are also among the strongest of the weekend. These teams have met in the divisional round of the playoffs each of the last two years, with Texas winning both, and it feels like a three-peat might be on the horizon.

Vomit. The Yankees collapse, which began on July 18, reached nightmare status with last night’s loss to the Birds. The 10-game lead is now a bad memory. Nobody’s hitting, the relief pitchers are imploding under pressure, and the starting pitching has been average to shaky. I talked about the awful persistence of hope earlier this week, and it continues with the promise of finally having Jeter, Swisher, Cano, A-Rod, and Teixeira in the lineup at the same time. But the Orioles have every bit of momentum on their side, and Showalter has his team playing like unrepentant Yankee-killing demons. There’s still a month of baseball left on the schedule, but it feels very much like this series will define the rest of the season. It doesn’t get any better, or worse, than this. I’ll even beat the awful North Carolina baseball blackout by heading to a satellite-friendly bar. And if this one goes how I think it’ll go, I’ll be the guy who’s sick to his stomach, and it will have nothing to do with alcohol.