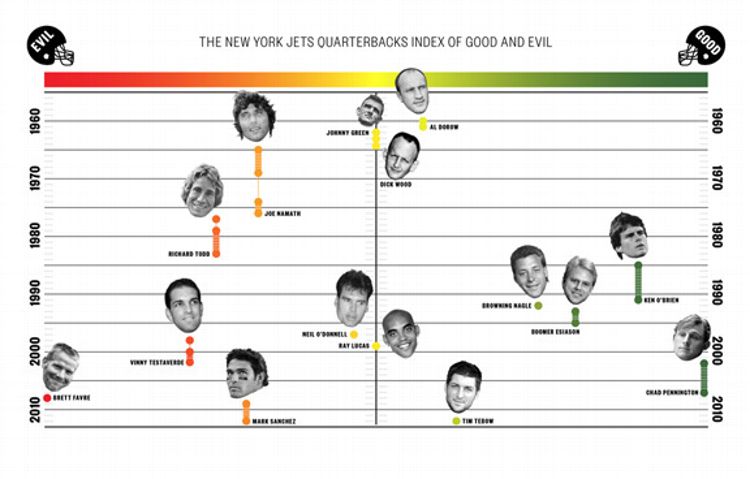 This season, two Jets quarterbacks — Mark Sanchez and that other guy — are about to embark on a classic battle of good and evil. OK, maybe just evil and evil. To commemorate this adventure, we look back at the heavenly, but mostly hellacious, history of New York Jets quarterbacking.

Brett Favre looked like he might become a ray of superstar sunshine after the Jets’ beloved Chad Pennington era came to an end after the 2007 season. But instead of delivering championships and recalling his Packers glory days, the Gunslinger allegedly shilled dick pics to sideline reporter Jenn Sterger and two team massage therapists.

Few QBs in Jets history caused more cases of bleeding lungs than Testaverde. Whether from stadium seats or basement couches, you could hear a chorus of furious shrieks any given Sunday Vinny was on the field.

Picture this: You’re a fledgling Jets first-round draft pick hailing from Super Bowl champion Joe Namath’s alma mater, Alabama. So what do you do? If you’re Todd, you throw nearly twice as many interceptions as touchdowns in your first five seasons. Thank heavens for the New York Sack Exchange.

Oh, Marky Mark, we found out about your inner lip tattoo via a co-ed whom you bedded in a shower. You posed for a GQ spread before you set foot on a regular-season NFL game field. You dated Tony Soprano’s daughter. But worse than all of that? You took the Jets to the AFC championship in your first two seasons, only to completely miss the playoffs in your third. Jesus take the wheel?

Namath should rank as the no. 1 good guy, having delivered Gang Green’s only Super Bowl ring. But his proclivities for boozing found him hitting on ESPN sideline reporter Suzy Kolber on Monday Night Football in December 2003. Sure, it was the least romantic “I wanna kiss you” of all time — but, hey, Super Bowl III, right?

A historic contract, a rejection of the Steelers, the promise of wins and touchdowns — O’Donnell lasted just two seasons in New York, including Rich Kotite’s nightmare 1-15 season in 1996.

Perhaps better remembered as more of a hero than he deserves, it was during the 1999 season when Lucas started over Testaverde’s second-string replacement, Rick Mirer. It was a soft showing as starter, but he did lead the team to four straight wins, evening the Jets’ record to 8-8 that season.

Despite his last name (and the fact that he played for the navy and gold, pre-Jets New York Titans), Green’s lasting mark on football was as a stellar inaugural QB for the Buffalo Bills. He stays neutral on the index.

Wood’s career history may be racked with team-hopping — he played for five different franchises in his six seasons in the NFL — but he’s the first QB to throw a touchdown at the Jets’ former home, Shea Stadium.

You never forget your first, even if he’s vaguely forgettable.

He has a Heisman Trophy, a propensity for Bible-thumping, and is such a holy weapon that beat writers have been discouraged from reporting on his progress in offensive schemes during training camp. This is incomplete so far, but Tebow continues to work hard at being football’s shirtless-in-the-rain embodiment of good.

Nagle was taken just one pick after Brett Favre in the 1991 NFL draft, but finished his career nowhere near him in the douche department. Nagle’s post-NFL career may have led him to arena football, but his life after pigskin is all about keeping people strong in theirs — he now works for Medtronic in the spinal care department.

Esiason famously vexed Hall of Famer Joe Montana in Super Bowl XXIII — just not for the Jets. But New York fans believe in Draconian loyalty, so rabid interest always ensues when a local boy comes to play for his home team. Esiason is fondly remembered, though his stint was brief.

During his lengthy tenure under center, O’Brien was renowned for his ability to throw deep, notably receiving accolades from MNF commentator Frank Gifford. Drafted before Dan Marino, O’Brien proved — despite sack-prone tendencies — it wasn’t a complete blunder in a 1986 game when he threw for 479 yards and four touchdowns, resulting in a nail-biting 51-45 score. Ask Wesley Walker, he’ll tell you the dude was all right.

The perennial favorite. The weak-armed but devilishly accurate Pennington lead the Jets to the top of the AFC East in 2002, only to relinquish his post in favor of that guy on the other end of this spectrum.