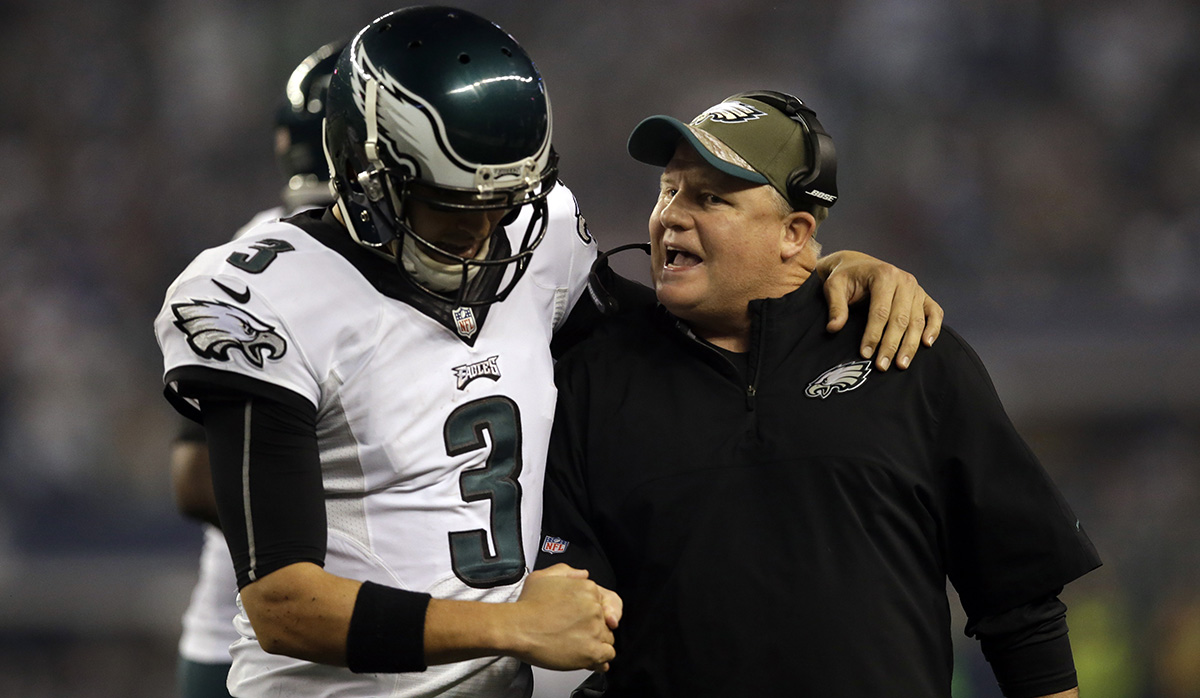 Todd Herremans saw the writing on the wall. The rest of the football world may have collectively gasped when the LeSean McCoy trade came to light, but Herremans had subtly hinted at it one day earlier. About a week after being released by the Eagles — following his 10th season in green — Herremans was interviewed on 97.5 The Fanatic in Philadelphia. When the subject of McCoy’s future came up, Herremans wavered. “I guess it all just depends on how bad Chip wants him,” Herremans admitted, “and if he thinks that he’s that instrumental in his offense. If he feels he can get somebody cheaper and just plug him in and still get production, then we’ll see.” Pressed on whether that’s how his old coach always thinks, Herremans acknowledged that Chip Kelly does value who’s playing quarterback and offensive line, before sharing a thought that perfectly captures Philly’s wild offseason.

“Other than that,” Herremans said, “I think that he feels he can kind of, you know — the system will take care of it.”

Five days following their regular-season finale — a 34-26 win that dragged them to 10-6 — the Eagles sent out a press release about a shakeup in their front office. It was accompanied by a statement from owner Jeffrey Lurie detailing the foundational change that was coming. Howie Roseman, after five seasons on the job, was moving out of his role as general manager and ceding control of personnel decisions. Roseman was named executive vice-president of football operations and actually got a raise, but in practice, the Eagles were handing Kelly the keys.

The Philadelphia Inquirer’s Jeff McLane wrote an excellent rundown of the reasoning behind the changes and what the new front office might look like, but the past few weeks have been the first glimpse of what they actually mean. Save for maybe the 49ers, no team in the NFL has seen more turnover with its stars this month than Philadelphia. Trent Cole is gone after 10 seasons. McCoy is off to Buffalo, 13 months removed from being named offensive player of the year. Fresh off an 85-catch, 1,300-yard, 10-touchdown season, Jeremy Maclin is now a Chief.

Bill Belichick has defined his career by unemotionally moving on from stars in pursuit of rosters that better fit his plan; he also won a Super Bowl in his second season with New England. Like Belichick, Kelly is now the man behind the curtain. Without question, the Eagles are his team, and that means that responsibility for this season is his too.

How It All Could Go Wrong

The first step in the Chipification of Philly’s offensive personnel came on the heels of the McCoy trade. The news broke early in the absolute mess of this free-agency calendar: Frank Gore was set to be an Eagle. Swapping McCoy for Gore was framed by some as Kelly trading a younger, more talented back for one who fits his vision of the ideal runner: a patient, downhill thumper who lets the blocking dictate plays, rather than the other way around. That thinking is problematic, but it’s hardly worth unpacking after yesterday’s turn of events: Gore may not be coming to Philadelphia after all.

Last night, news began to trickle out that Gore was wavering on his choice and that the Colts were now in play. If Gore does spurn the Eagles for Indianapolis, as expected, it leaves Kelly with only Chris Polk — he of the 57 career carries — and Darren Sproles at running back. There are still some affordable backs left on the market. The oft-injured Ryan Mathews is available, as is the zone-scheme-fluent Justin Forsett. But the options are dwindling.

Even with the plan built around Gore, it was clear that Kelly had put his faith, as Herremans noted, in both his scheme and the offensive line to shape Philly’s running game. Two years ago, that thinking would have been just fine. The Eagles dominated on the ground in 2013, leading the league in rushing DVOA by a ridiculous margin, behind a line that laid waste to everything in its path. The same wasn’t true last year, despite the return of all five starters along the line. When Philly’s offense sputtered early in the season, there was talk that defenses had caught up with Kelly’s wizardry, that his black magic wouldn’t work a second time through the league. That’s one explanation. The other is that his canyon-creating line was crumbling from the start.

Before halftime of Week 1, left guard Evan Mathis was lost for two months. Center Jason Kelce went down in Week 3. Herremans was done for the year after Week 9. Right tackle Lane Johnson was suspended for the first four games. In Kelly’s first year, his line started all 17 games together. None of the other linemen on the roster even reached 100 snaps on offense. Last season, nine linemen played 200 snaps for the Eagles offense.

It’s reasonable to believe that this year will fall somewhere in the middle. The Eagles probably won’t face an apocalypse again up front, but offensive linemen do get hurt, and when the shifting parts inevitably lead to a drop in performance, it helps to have a back who can turn a 2-yard loss into a 2-yard gain.

Just as Maclin joined McCoy on the way into Philly, the receiver joined the runner on the way out. Reportedly, Maclin got about $2 million more annually in Kansas City than the Eagles’ reported offer of $9 million a year. With Maclin gone, the Eagles’ outside-receiver situation looks shaky. Sans DeSean Jackson, who was cut last offseason, Maclin was the only option outside the numbers. Now, the Eagles are left with Riley Cooper and Oregon product Josh Huff. The Eagles still have plenty of money to spend, and Andre Johnson has come up as one possibility. But Johnson mentioned yesterday that he’d love to play with a great quarterback (who could blame him at this point?), and the Eagles’ uncertainty at the position could be enough to push him somewhere like Seattle or Indianapolis. No receiver in the league played a higher percentage of his snaps from the slot last season than Jordan Matthews, and with him, tight ends Zach Ertz and Brent Celek, and Sproles on the roster, Kelly’s best bet in the passing game will likely revolve around attacking the middle of the field. Still, with McCoy and Maclin gone, it isn’t hard to imagine an Eagles offense that falters on the ground with an unhealthy offensive line and struggles through the air without a legitimate threat on the outside. 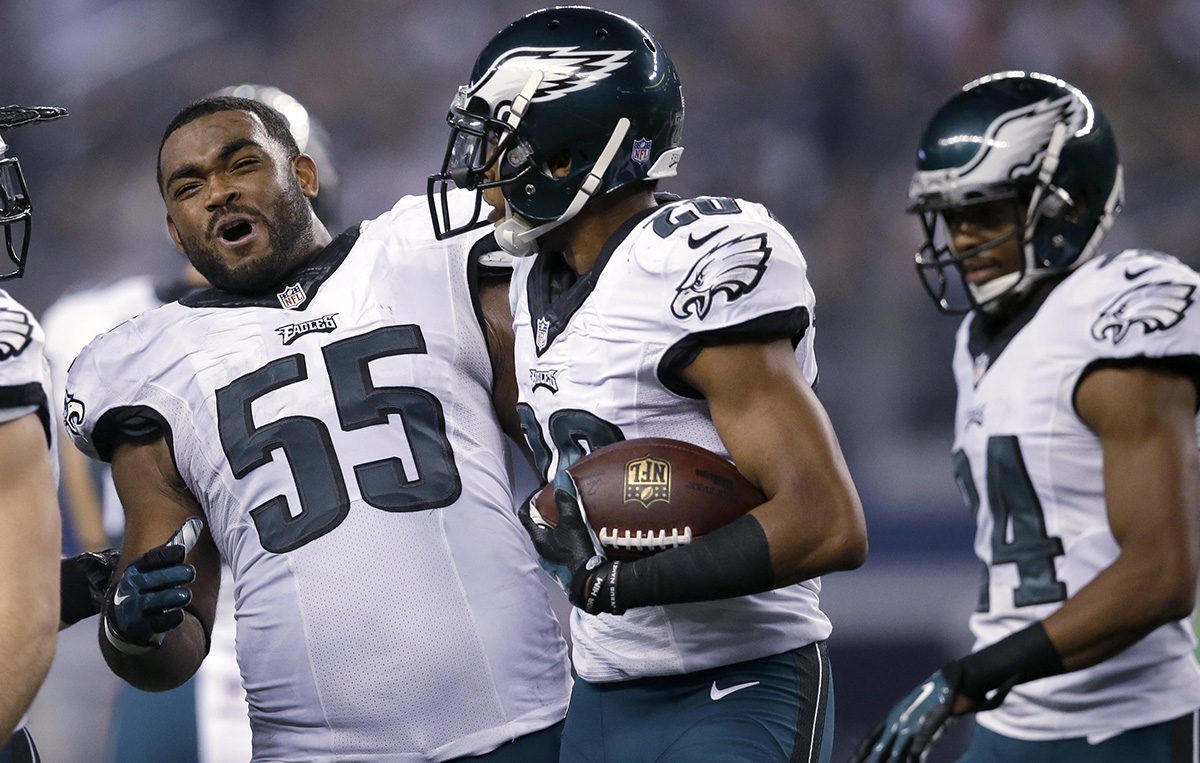 How It All Could Go Right

The changes on defense aren’t quite as drastic, especially with the news yesterday that the team re-signed Brandon Graham. Without Graham in the fold, Philly’s edge pass rush might have been in trouble. Trent Cole may be 32, but he was still productive. Losing him and Graham would have meant having Connor Barwin and last year’s first-round pick, Marcus Smith, as the team’s primary outside linebackers. Barwin was fantastic last year, but a significant portion of his value comes in the many ways the Eagles can use him. He’s versatile in coverage and can rush the passer from anywhere. Bringing back Graham allows Barwin to maintain a role resembling the one that helped him to the Pro Bowl last year.

As a unit, Bill Davis’s defense made massive strides in his second season. The Eagles finished 10th in defensive DVOA, thanks mostly to the work of their guys up front. Along with their edge rushers, most of the players on the interior bring something positive to the table. Fletcher Cox is a star, Vinny Curry was a pass-rushing terror in limited work last year, and nose tackle Bennie Logan is just a really unpleasant afternoon for most centers. Add all that to Mychal Kendricks’s emergence and the chance that Kiko Alonso can replicate what he did with the Bills as a rookie, and it’s among the best front sevens in football.

Where the Eagles ran into trouble last year was on the back end. They finished 20th in pass-defense DVOA, which earned Byron Maxwell a trip to a new tax bracket earlier this week. Occasionally, teams will give free agents a premium simply for not being the guy who lined up in that spot last year, and Maxwell’s deal was sweetened with plenty of “Not Bradley Fletcher” bonuses. That’s what Philly has to be banking on in the secondary. Even with Maxwell, there are still questions about who’s playing safety next to Malcolm Jenkins, but the hope is that Maxwell and Nolan Carroll (or whoever replaces Cary Williams) will be a significant upgrade over last year’s pair of corners. 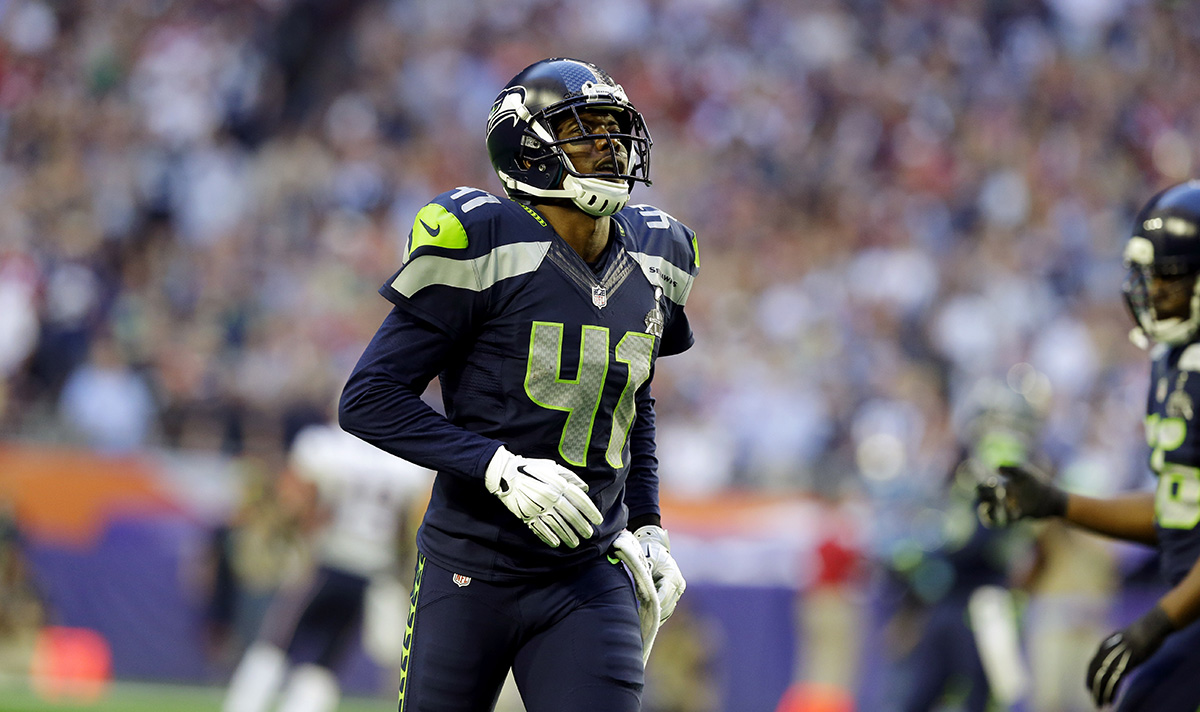 Alonso is an obvious fit in Kelly’s grand plan, not only because of the Oregon connection, but because he brings the speed that Kelly strives for on defense. It’s the offense, though, that will ultimately determine Kelly’s success or failure as a roster builder, and it’s impossible to forecast that side of the ball without considering Marcus Mariota. One way to frame Kelly’s maniacal redecorating these past couple of weeks is to consider that the Eagles may not have many picks to work with, in both this draft and those in the near future. Saying good-bye to high-priced veterans has opened up the chance to fill more needs with free-agent dollars, and by re-signing Mark Sanchez, Kelly has a fallback option that knows his offense if the need arises to throw Nick Foles in a trade-up for his ideal quarterback.

With all the shuffling Kelly has done, particularly the retooling to build an offense that fits his vision, it would seem only more likely that he will make a bold move in pursuit of a quarterback who can hold the whole thing together. Maybe with Mariota taking the snaps, who’s running the ball does matter less. Maybe it does make a nicked-up offensive lineman or two easier to survive. Maybe it does make a middle-of-the-field passing game hinging on play-action a reliable way to crush teams through the air. As much as Kelly trusts his system and his vision, both are likely dependent on finding a quarterback who can see them through. For all of Belichick’s success, it’s impossible to untangle it from the steadying presence that Tom Brady has provided. That’s how the legacies of most coaches ultimately play out. How we look back on Kelly’s spring will likely rest on whether he finds his own fixture at quarterback. Right now, that could be Kelly’s final conquest.