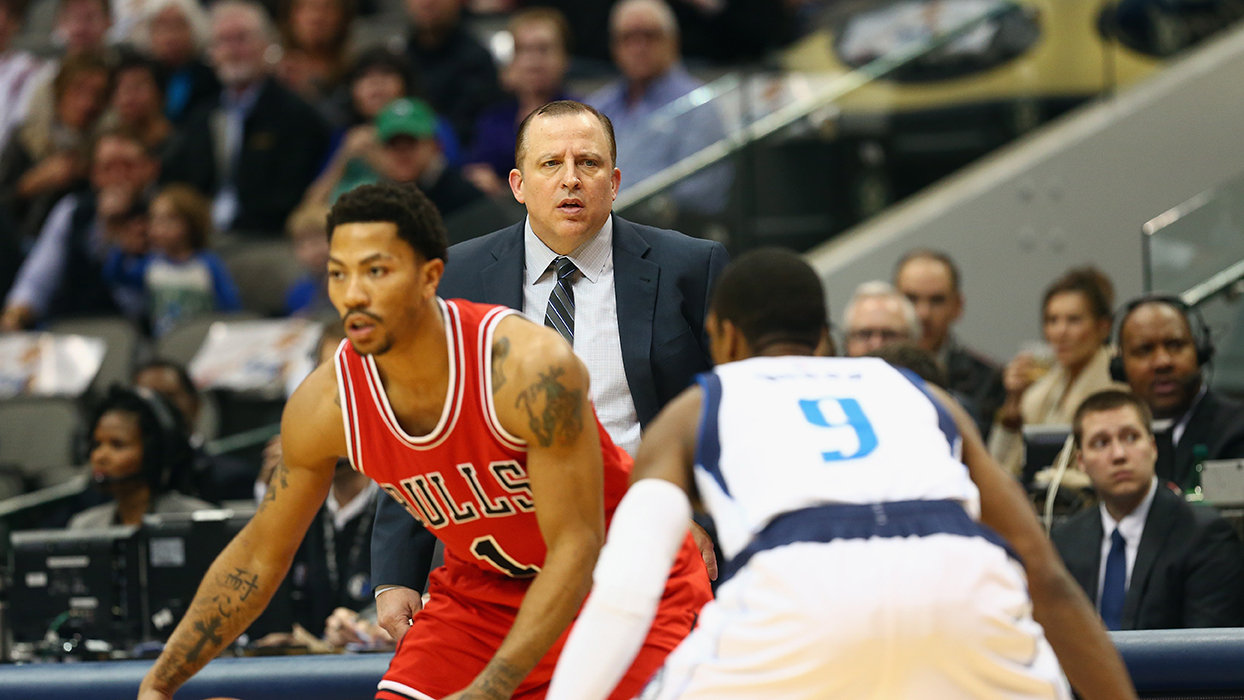 This is not a piece about Derrick Rose and his injuries. It is about times changing, but mostly, it is about my favorite coach, Tom Thibodeau.

If you pay any attention to the NBA, then you probably know Tom Thibodeau’s history. Before Chicago, he was a career assistant and defensive specialist. While working in New York, he helped the Knicks hold opponents to under 100 points for 33 consecutive games; he’s also credited for implementing the smothering Celtics defense that helped win their title under Doc Rivers.

When Thibodeau came to the Bulls in June 2010, he was exactly what we needed. Since the Jordan era, Chicago had struggled for an identity. After years of watching my beloved Bulls become a laughingstock, I was ready for a change. With Thibs as our coach, I knew we would be competitive. In his first season, he led us to the Eastern Conference finals. Thibs is a hard-nosed, old-school guy. He works the players to the bone. He demands excellence, intense D, commitment to the team. The Chicago Bulls, under Thibs, are a team no one wants to face. I wanted Thibs to be to the Bulls as Coach K is to Duke or Coach Pop is to San Antonio. Under Thibs, we seemed like we were on the verge of competing for years to come.

The wear and tear on players is brutal. But Thibs didn’t seem to care. When asked about his nagging plantar fasciitis and possibly resting it more, Joakim Noah joked, “We’ve got a great coach. But he doesn’t understand the whole rest thing yet, I don’t think. But it’s all good. We all want to win.” Thibs believes that the best players should be on the court, and that the game is never over.

This brings us to Derrick Rose, back to the 2012 playoff series against the Philadelphia 76ers. This should’ve been easy for us. We were the better team. We were leading Game 1 by 12 points with one minute and 22 seconds remaining. The game was over, to everyone but Thibs. Thibs kept his starters in to finish it off. Derrick Rose, a league MVP, cut into the lane and tore the ACL in his left knee. He has never been the same player since.

I was watching the game in Chicago at my brother’s place with his newborn son. My nephew was trying to sleep, but I was screaming: “Why was he in the game?! Why?” As Derrick’s teammates carried him off the court, all I could say over and over was, “Why the hell was Derrick Rose still in the game? We had it.”

We lost that series. Derrick didn’t play the following season. And Tom Thibodeau didn’t change his style. At all.

Like I said, this is not a piece about Derrick Rose’s first knee injury, or his second, or his third. This is not about Joakim Noah’s plantar fasciitis or ankle injuries. This is not about the fact that Jimmy Butler, 25, who averaged 38.9 minutes per game this season, is starting to look like a character from The Walking Dead. It is about times changing. And the need to change with them, whether you want to or not.

One of my favorite shows is The Wonder Years. The show is a nostalgic look at the late 1960s, from the POV of Kevin Arnold, the youngest of three kids, living a typical suburban life. The reason I mention it now is that the patriarch of the family is a guy named Jack Arnold. Jack is an old-school man. A man’s man. A man who would hate IPAs, artisanal cheeses, and this article. I loved Jack Arnold. Tom Thibodeau is Jack Arnold.

There’s an episode titled “The House That Jack Built.” Jack’s oldest daughter, Karen, moves out of her dorm room and into a house with her new boyfriend, played by a hippie-looking David Schwimmer. Jack can’t accept this. It isn’t how he raised his daughter — living out of wedlock with hippie Schwimmer. So the Arnolds visit Karen and Schwimmer’s new place, and Jack tries to come to terms with this living arrangement. It’s overwhelming to him.

He takes a long walk by himself to decide if he should allow his only daughter to leave the dorm room and live with Schwimmer. He returns to the apartment and tells his daughter: “I took a walk, did some thinking. I asked myself if I’m the one who’s wrong here. But I just keep coming back to the same answer … I can’t allow this, Karen.”

Karen responds, “What do you want me to say to that, Daddy? You want me to move back into the dorm?” The family is tense. Jack nods, “As a matter of fact, I do.” Karen thinks about this, looks over at Schwimmer, then tells her father: “No.”

They go back and forth about how he raised her with more ethics than this and she defends the new era of following her heart, and then Karen says: “Daddy! These aren’t the dark ages. Times have changed. Things have changed.” Jack is furious, heartbroken, and screams: “I HAVEN’T CHANGED!”

I can’t watch this scene without getting choked up. It is a nearly perfect TV moment. It’s old-school versus new-school. An old generation giving way to a new. These days, as I watch Bulls games, with Thibs screaming and yelling and running these star players into the ground, I think of this scene. I see Thibs as Jack Arnold, covered in sweat, and the players he grinds into the ground are all his hippie children who are moving in with David Schwimmer, and Bulls ownership and the media are telling him to change. And he simply hasn’t.

Sometimes change is good, and sometimes it’s bad. But it happens, and there is no stopping it. If you don’t make adjustments and take care of the health of these players, you will be gone. Your “children” will leave home and resent you, and you will be all alone and missing them.

Ownership simply can’t have you destroying these players. The league is different. It is not the rough-and-tumble NBA of the ’80s and ’90s. Ron Artest ruined that. When the greatest player in the game misses two clutch free throws, he posts a selfie in which he’s making a sad face.

This is a league where, if you leave the bench during a scuffle, you’re going to get suspended. It’s a league in which a guy the size of Steph Curry can drive the lane and not get clotheslined.

I think Tom Thibodeau is the best coach in the league. I’d like him to coach the Bulls for the rest of his coaching career. But he has to make a change. He has to become part of the new NBA — the new world. I know. It’s terrible. He can hold on to his core principles of selflessness and relentless defense and still make some changes. He can have easier practices for veterans, rest his star players — like Popovich does throughout the season — and even sit guys when the game is out of reach. He can change and still have it his way.

My fear, though, is that, like Jack Arnold, Thibs hasn’t changed. And that, sadly, he won’t.

Jake Johnson (@mrjakejohnson) can be seen on Fox’s New Girl on Tuesday nights. His movie, Digging for Fire, which he cowrote with Joe Swanberg, will be released this year.