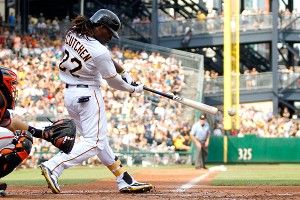 The extended All-Star break is officially the worst development in American sports. What am I supposed to do with my life? Actually go outside? No thanks. The only time I want to go outside is if there’s an outdoor TV showing baseball. And even then, why not bring the TV inside where there are chips? Baseball players are selfish and should be forced to play tripleheaders for the rest of the season.

10. This Week’s Reason to Consider Watching the Royals! (KCR-CWS)

After reading Rany Jazayerli’s great article about being a fan in Kansas City and recalling my own bitter response to KC fans booing Robinson Cano, I decided it’s time to extend the olive branch. Each week, we’ll be hunting for reasons to consider actually watching the Royals play and then evaluating those reasons to see if they’re compelling enough. This week, your reasons are: Kevin Youkkkkkkilis, Alexei Ramirez, and Alex Rios. Sorry, should I have mentioned that the reasons will often come from the other team? Anyway, those three have been tearing up the American League their past seven games, each with an OPS above 1.000 and an average north of .430. Youk in particular is making good on the cold-blooded post-Red Sox revenge campaign we were promised. Throw Chris Sale into the mix, and the White Sox are a fun squad. But are they fun enough to merit watch the Royals? Let’s find out:

I remember taking up tennis at the beginning of high school and playing informally with a very nice, very rich kid who was also very, very unathletic. I’m not a standout athlete by any means, but I’m OK enough that it was still aggravating when he kicked my ass all over the court. I remember thinking that if I had grown up in country clubs playing tennis from the time I was a little kid, I’d be about 50 times better than him now. It was all about circumstances. You see where I’m going here? Darvish is 10-5 with a pretty good ERA, a pretty good FIP, and a lot of strikeouts (10.26/9). Still, he walks a lot of guys, and although he’s absolutely in the top half of MLB pitchers, he’s certainly not great. Felix Hernandez, on the other hand, is the fourth-best pitcher in baseball by WAR and has better numbers across the board than Darvish. Yet he’s 6-5. It doesn’t take a detective to understand the difference — Yu benefits from the best offense in baseball (his run support is 18th overall) while Felix is fifth-to-last in run support. At least he’s not Doug Fister.

I can already picture King Felix losing 2-1 on Saturday, looking across the diamond at Darvish, and thinking, Man, if I had what you have …

It keeps getting worse and worse for Tim Lincecum, the former Cy Young winner who finished last season with a 2.74 ERA. He’s now 3-10 with a 6.42 ERA and has given up 13 earned runs in exactly 3.1 innings during his last two starts. His FIP numbers (a so-so but not terrible 3.98) seem to suggest that he’ll rebound at least a little. The big problem is the diminished fastball velocity and the resulting inflated home run rate. He’s giving up more than one dinger per nine innings for the first time in his career.

And if you’re a sicko who loves seeing players implode, what better opponent than the Houston Astros? If you lose to the worst team in baseball, you’ve really lost.

The other night I was minding my own business on my couch when a roach scurried out by my feet. It was average size by roach standards, but even normal roaches are too damn big. It scared the bejesus out of me, and I took a minute to gather myself for the kill. I steeled my nerves, and though the critter escaped back under the couch for a moment (and my girlfriend had the audacity to suggest I leave it be, as if I could ever sleep knowing a roach could crawl over my face at any moment), I flushed it out with loud noises and finished the job. Looking at its dead carcass on the ground, I considered how ugly it was. I like animals and consider myself a humane person, but there was just no way I could drum up any sympathy for the ungodly creature on the carpet.

Also, hot off the presses, it’s the Boston meltdown part two! (For part one, click here.)

And that is exactly how I feel about Dustin Pedroia and his injured thumb.

The sped-up R.A. Dickey knuckleball is just plain exciting, and until he implodes, he’ll always make this list. That’s especially true when his team is playing a division rival (the Braves and Mets are neck and neck for the second wild-card spot), and he’s facing Tommy Hanson, an effective pitcher in his own right (though one whose metrics suggest the 10-5 record is a bit fluky).

It’s a bit of a long shot for Detroit and Baltimore to actually meet in the playoffs since they’d both have to overcome the Angels in the West, but this series should be fun anyway. Considering that the Orioles have scored 36 fewer runs than they’ve allowed and play in a monster of a division, many of us are waiting for that other orange shoe to drop. So far, 2012 has been the year when every team we expect to fade has kept pace, to the point that at least one is likely to keep that momentum to the very end. I’m just not seeing it for Baltimore. I think the collapse starts now, which might actually annoy Detroit. They were collapsing before it was cool.

Want me to tell you how the Yankee season probably ends? Easy — in three or four games against the Angels. The Angels have two potential aces (Jered Weaver and C.J. Wilson) to the Yankees’ one (CC Sabathia), and anybody who’s not terrified of the Pujols-Trout-Trumbo combination is delusional. Also, Ernesto Frieri STILL HASN’T ALLOWED A RUN in 26.1 innings with the Angels. This is just a miserable team to face in a five-game series. When the Yanks win the East, as they inevitably will, and the Angels finish second in the West, as they inevitably will, I’ll be rooting like a madman for the second wild-card team (Tampa? Baltimore? Detroit?) to take the Angels down in the one-game playoff. And if it works out, I’ll literally kiss Bud Selig for changing the format. That is going to be awful. I mean, have you seen Bud Selig lately?

Awesome. Both are in the top 10 in FIP, and this will be my first time seeing McDonald, who boasts the fifth-lowest ERA in the MLB. He’s been very strong in his last four starts, which included four straight wins, eight runs allowed in 28.2 innings, and a complete-game six-hitter against Minnesota. Fangraphs says he has the fourth-best curve in the game after Verlander, Strasburg, and Burnett. That’s a big compliment, particularly for a guy whose average fastball is down around 91. Though he mixes in a very effective slider, he’s a little like Gio Gonzalez in his profile. Speaking of Gio …

I went up to D.C. last weekend to see Gonzalez and Strasburg pitch, and it was a fantastic time, despite the heat. I’m a Yankees fan, but I thought it would be OK to buy a Nationals T-shirt at the stadium store since they aren’t in the American League. It was an innocent decision, but it created a very awkward moment during Tuesday’s All-Star Game. I was wearing my Strasburg shirt and was mildly pleased when he took the mound. Then something horrible happened: Robinson Cano stepped to the plate. My favorite f—ing player, and I’m wearing the shirt of the guy trying to get him out. Before I had time to react, Robbie got a base hit up the middle. He smiled as he stood on first base, but I couldn’t help but feel that somewhere deep inside, he felt I had betrayed him. I spent the next half-hour screaming What have I done?! over and over before burning the T-shirt and then my entire apartment. Just in case.

Seriously, this is the team of the moment. They’re up one game on the Reds in the NL Central, and their run differential (+32) shows that, hey, maybe they belong. We already talked about James McDonald, but look at the WAR offensive leaderboard for the last 14 games. During that stretch, the Pirates have two of the three best hitters in the game in Andrew McCutchen and Neil Walker. These guys are young, they’re exciting, and they’re legit. My God, they’ve even rejuvenated A.J. Burnett!

I love the moment when you realize a team that used to be nothing but a joke suddenly proves it’s made the leap. That moment for the Pirates came when Andrew McCutchen finished the first half of the season by jacking two homers against the Giants, leading his team to a series win and first place at the break. If McDonald can beat Greinke tonight, well, that’s the moment for anyone who missed the first one.