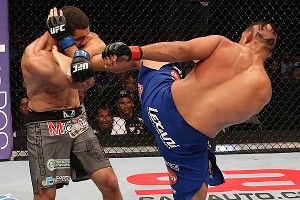 Like most of the American workforce, I spend a considerable amount of my day linking YouTube videos or Google images in meaningless instant-message exchanges. My friend Lemmer navigates his computer for similar reasons. Anytime he comes across a female body in a story, search, or banner ad, he’s compelled to click on it. It’s reflexive — he can’t control himself. After seeing him drag his mouse over a breast for the millionth time, I jokingly asked him, “How many is enough?”

The Ultimate Fighting Championship is a seductive temptress of a different kind — subject to the same kind of saturation that’s probably melting Lemmer’s brain. You might remember UFC 147 happening in Brazil just two weeks ago, quickly followed by last Saturday’s much-hyped showdown between Chael Sonnen and Anderson Silva during Fan Expo Weekend in Las Vegas. When they crammed in another UFC event in San Jose on Wednesday, it couldn’t be called anything other than gratuitous.

That didn’t stop Lemmer and me from locking in seats for $120 a ticket.

For those of you who haven’t attended a UFC event yet, you’re probably wondering how to best blend in with the extended cast of Sons of Anarchy. Your first thought is inevitably, “Do I have enough black clothing?” Just know that myth was dispelled during our last trip to HP Pavilion for the Shogun-Henderson fight, which featured multiple tax brackets, martial-art schools, and a surprising number of women and servicemen. Sure, we saw plenty of epidermal ink and body piercings, but those were just the unwed grandmothers.

Like most mid-week events, UFC on Fuel 4 featured lesser-known fighters interspersed with just enough recognizable names to create a respectable card. And like most UFC cards, we had a lamentable injury scratch: Jon Fitch of American Kickboxing Academy, one of the card’s most established fighters, who withdrew from his bout with Aaron Simpson after wrenching his knee. Fitch, while well respected, is also controversial. His impressive record comes from a smothering style that caters to fans with low thresholds for excitement. To be fair, Fitch makes up for fights he leaves to the judges with riveting food blogs.

Anyway, we arrived in San Jose shortly after 2:30 to join a crowd that was either unemployed, blowing off work, or waiting for the Sharks opener in three months. The pre-event buzz was no different from other live sporting events — there was the anticipation of seeing the cage, the fighters, and that massive lighting rig that looks like it’s on loan from the Monsters of Rock tour. Mix in an improbable revival of gladiator music with black-and-white trash-talking promos, and the ensuing frenzy of adrenaline was as perfectly timed as an insulin pump.

Is there a temptation to bathe oneself in the sport by purchasing an official mixed martial arts T-shirt? Of course. From what I can gather, enormous letters are a must; swords or skulls are a maybe. I‘ve reached for my wallet repeatedly over the years thinking I could rock one — no problem. Then I hear that voice in my head. It’s my wife saying, “What the fuck is that?” Maybe next time.

To our disappointment, “fightcast” headsets weren’t available for purchase at the Pavilion. For around $20, these compact radios enable fans to hear the televised broadcast while watching the fights. (They greatly enhance live events and are worth every penny.) We worked our way down to our seats, landing just one row back from the walkout path to the ring. Not only would we see the fighters up close, but some high-profile corner men! Oh, you think I’m kidding? Later in the evening, we watched one of the sport’s biggest stars, Georges St.-Pierre, carry Francis Carmont’s spit bucket to the cage. Where else would that happen? Pure brain candy just thinking about it.

The connection between UFC fans and the athletes is remarkable. They smile and shake hands, take photo after photo, pretend to be interested in ugly babies, and even punch you in the shoulder if that’s your thing. As revered as they are by die-hard fans, most fighters remain unrecognizable to the public and even stadium employees. Before the card started, we watched Strikeforce lightweight champion Gilbert Melendez (who had floor access obviously) get totally stonewalled by a security guard. Apparently, he was instructed to enter through a different aisle from the concourse. He could have easily strolled over to his seats behind UFC president Dana White, only the usher had no idea who he was. Did Melendez protest? Nope. No inflated ego at all.

Shortly thereafter, local favorite Cung Le limped through the crowd near ringside to the cheers of fans. (Note: Le injured his foot after defeating Patrick Cote at UFC 148.)

Fortunately, Le wasn’t asked for proof of entry, although he may have been mistaken for a food vendor. But those star sightings kept happening throughout the afternoon. We saw TUF coach Urijah Faber of Team Alpha Male, former UFC heavyweight champ Cain Velazquez, and even Michael Mersch regaling fans. Fine, Mersch is an attorney for the UFC and didn’t draw any fan response, but that didn’t stop me from screaming out his name anyway. Check out his highlight reel.

After Lemmer and I took turns going on beer runs, it became apparent we weren’t paying enough attention to the fights, and there were some good ones. James Te-Huna successfully broke his hand and foot blasting away at a zombie-like Joey Beltran for three rounds. Alex Caceres, better known as Bruce Leeroy (don’t ask), submitted Damacio Page with a triangle choke that would have sent Joe Rogan into an epileptic seizure of excitement. The only disappointment was an extended hug-fest between Aaron Simpson and Kenny Robertson. The crowd grew more and more agitated as their “fight” became eerily similar to any “Ace and Gary” episode from SNL. Fortunately, that testosterone threat was successfully quelled between rounds when ring girl Arianny Celeste morphed boo(b)s into cheers.

Headliners Chris Weidman and Mark Munoz gave us the knockout of the night, with Weidman landing a brutal elbow early in the second round of a fairly one-sided fight.

Munoz appeared to be unconscious even as Weidman was mounting him from behind and delivering repeated blows to his head. Referee Josh Rosenthal eventually noticed what was happening and ceased texting his friends to stop the fight.

Quick aside: Every MMA event brings an ongoing concern that the line separating competition from serious injury will be crossed. No contact sport is immune from this, but the nature of mixed martial arts brings us to that specific line more often, and more abruptly. That’s why the eruption of cheers following Weidman’s knockout morphed so quickly into those “Stop the fight!” pleas, which is what always happens at these events — an enigmatic portal of aggression yielding to overwhelming compassion. According to the post-fight reports, Munoz likely only suffered a broken jaw. In the world of MMA, that’s a good thing.

When Lemmer and I were leaving the arena, we started discussing what makes the UFC different from other sports. Lemmer pointed to Dana White high-fiving all the fans, saying, “He really seems to be enjoying it as much as they are.” That’s a great point — White is a mixed martial arts nut like the rest of us. And like us, White knew that it didn’t really matter who won or lost that night, just that everyone had an undeniable admiration for everyone involved. The fighters were as excited by the fans as the fans were by the fighters. In modern sports, that’s a rarity.

I dropped Lemmer off at his house in San Francisco and asked if he planned on getting some sleep. He shook his head no, saying that he planned on hopping on the Internet and reading about what just happened.

“After watching 11 fights, you’re going to read about them some more?” I said in disbelief. “How much is enough?”

He just laughed and unlocked his door. We both knew the answer.

Filed Under: UFC, We Went there