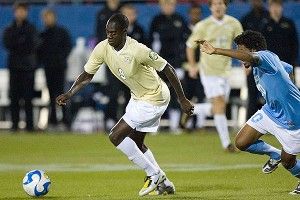 In the fifth round of the 2001 MLS Super Draft, the San Jose Earthquakes drafted Corey Woolfolk, a senior forward from Stanford University, a two-year captain who had led the team to the national championship game his sophomore year and finished his career at Stanford ranked top 10, all time, in all scoring categories. Woolfolk wasn’t expecting to get drafted. He hadn’t even been invited to the MLS combine. As he said, his “eyes were set on Europe,” where he wanted to play professionally. Being a fifth-round draft pick, his expectations weren’t lofty: His goal was to make the Earthquakes’ decision to cut him or keep him a hard one.

He succeeded in that mission. In the preseason, he played in seven of San Jose’s nine games and finished as the team’s leading scorer. Woolfolk played that preseason as an unprotected player; MLS players sign contracts with the league, and the league assigns them to teams. He didn’t have a contract. Woolfolk didn’t even earn a paycheck.

Roster deadline day approached. Woolfolk’s agent told him he had a good chance of making the team. And he did. San Jose offered Woolfolk a contract. He signed it the night he got it.

The next morning, the Earthquakes’ coach, Frank Yallop, called him into his office. Woolfolk remembers the conversation: “We’re going to have to let you go,” Yallop told him him. Woolfolk asked him why. “It’s not what you’ve done,” Yallop said. “You’ve made our job very difficult. But there’s this player from Germany …”

That player from Germany was a 19-year-old kid named Landon Donovan.

Unlike Woolfolk, Landon Donovan hadn’t gone to college. He hadn’t even finished a “traditional” high school experience. He’d spent his last few years of high school in a residency program with the under-17 national team at the IMG Soccer Academy in Bradenton, Florida. Donovan was one of the first — and, in retrospect, probably the best — products of the U.S. Soccer Federation’s Project 2010, a plan implemented by U.S. Soccer in 1998 with the goal, ostensibly, of creating a training environment that would enable a group of American players to become good enough to contend for the World Cup in 2010.

The report included two key initiatives: Project 40 (now called Generation Adidas), which would provide any player who had not graduated from college with an MLS contract, an education stipend, and specialized training opportunities (like a trip to Europe). The other initiative was the IMG Soccer Academy. Donovan was part of the academy’s inaugural class, which also included DaMarcus Beasley, a star of the 2002 World Cup; and Oguchi Onyewu, a member of the 2006 and 2010 World Cup teams who now plays for Sporting in the Portugal Primeira Liga.

In the winter of 2001, Donovan was playing for Bayern Leverkusen, who had signed him in 1999 after he won the Golden Ball at the 1999 FIFA Youth World Championship. But Donovan wasn’t getting on the field for Leverkusen’s first team. He wanted to play, he wanted to play in the MLS, and he wanted to be in California, his home state.

When a league representative asked Yallop if he was interested in Donovan, he said yes. “It was exciting,” Yallop said. “I’d seen Landon play for the U17 team in Bradenton maybe two years before. He scored a hat trick in the game. Great finisher, lightning quick. What a time to get a player like that.”

When Woolfolk learned who Donovan was, what he’d already accomplished in his career, he realized there was “nothing much I could do.” San Jose cut Woolfolk and signed Donovan.

We all know what happened with Landon Donovan. As for Woolfolk: He never played an MLS game and never played in Europe. After the Earthquakes cut him, he signed with the Minnesota Thunder of United Soccer League-A, a minor league team. Injuries plagued him over the next few years, and he played for a few other minor league teams before retiring from competitive play in 2008. Always an excellent student — he’d graduated in the top 10 of his high school class — he went on to earn his MBA from Stanford and now works as an entrepreneur in the Bay Area.

“I may not have been as good a player as I thought I was. I remember watching Landon later that season, when he was [19]. He was amazing. Could I be a contributor, starting games? No. That was a better business decision” for San Jose.

The convergence of these two young men in San Jose in the spring of 2001 — and their different career trajectories — was a moment when the traditional model of American soccer player development intersected with the burgeoning new one.

College soccer had played a key role in that traditional model. In 1997, the year Woolfolk entered Stanford, virtually all American soccer players went to college. As he told me, kids going straight from college to the pros was unheard of. The MLS was only two years old at the time, and playing in Europe or South America was still a distant dream for American kids.

In most American sports, college athletics provide the best training environment for aspiring professional athletes. That’s not the case with soccer. Competition for spots on professional soccer teams comes from all over the world. And in foreign countries, the best players don’t go to college, they train in professional environments.

Woolfolk saw this firsthand. While a junior at Stanford, he studied abroad at the University of Glasgow in Scotland and trained with the reserve team of Rangers, a Scottish First Division club. He said at Rangers, guys who were “18 to 22 trained twice a day, everyday. Played games the entire season, August through May. They’re playing 40 games that are meaningful.”

In contrast, the college soccer regular season runs for three months, from August through November. Conference tournaments are held in early November, and the NCAA tournament runs to the end of December. Teams play about 18 games, maybe as many as 25 if they make it to the national championship game. From the end of December through the beginning of August, due to NCAA regulations, college teams can only train and scrimmage other teams.

Many college players supplement this lack of training and competition in the offseason by playing for teams in the United Soccer League’s Premier Development League (PDL), the top amateur league in the country. But playing for a new team under a new coach can be disruptive to their training regimens, and the PDL still doesn’t provide a competitive environment comparable to those in foreign countries.

The former professional players I spoke with said they’d ideally like to see the NCAA make changes regarding soccer, like extending the season so that it runs from fall to spring, or developing partnerships with the PDL or MLS so players can more easily receive quality training year-round. But because soccer is rarely a revenue generator for college athletic departments, there’s not much incentive for the NCAA to institute such changes.

In recent years, the MLS and U.S. Soccer have increased the opportunities for college-age players to train and play in professional environments, with initiatives such as Major League Soccer’s Home Grown Players.

The issues with the college game and the new opportunities to train and play with professional teams has recently led many talented young soccer players to skip college. You can see this in the USMNT roster. On the ‘94 World Cup team, 17 of the 22 players attended college (all five who did not were born outside of the United States). On the USMNT’s most recent roster, only nine of the 23 players went to college.

These recent changes have caused some analysts, including ESPN’s Leander Schaerlaeckens, to say it’s possible that college soccer could become an irrelevant training option for American players.

But former professional players disagree. While acknowledging the shortcomings of the college game, the players I spoke with — including Alexi Lalas, Tab Ramos, Taylor Twellman, and Kyle Martino — said college offers important benefits to players. The first of these is the opportunity for players to develop the personal characteristics that become essential elements of their success as professional athletes.

Kyle Martino, an analyst for NBC and the 2002 MLS Rookie of the Year, said he had the opportunity to play in the MLS after high school, but he wanted a college experience. He attended the University of Virginia for three years. He said that college helps a player become “a well-rounded person, that you have to discipline yourself, that you have schoolwork, and you don’t have somebody following you around telling you what to do. A lot of [that] development helped me become a better teammate and professional.”

Alexi Lalas, an ESPN analyst and member of the ’94 and ’98 World Cup, said, “I think in our zeal to produce a better soccer player, we have failed to recognize the aspects to making a better soccer player that have nothing to do with kicking a ball. You have to be able to handle the 22 hours and 30 minutes that you’re not on the field. When you talk about the college game you have to think about overall player development. I think it’s benefited U.S. players.”

Martino also addressed the differences in maturity (an issue that Steve Kerr mentioned in his article on college basketball players) he saw between professional players who had gone to college and those who hadn’t. “You could [tell] guys who skipped college in the way they held themselves. There was an insecurity and immaturity in a way they interacted with the rest of the team.”

Along with opportunities for essential personal growth, many feel college helps players develop as leaders and learn how to compete for a team.

Woolfolk said that in college, “players get to carry the mantle. They know what it means to be counted on. [They] feel the pressure of, ‘if I miss this penalty kick, we might not go on to the national semifinals.’”

Tab Ramos, the coach of the U20 national team, was drafted out of high school by the New York Cosmos in 1984. But he and his family decided he should go to college and get an education, “I valued my college experience,” he said. “It gives you a great opportunity to learn to compete. For players who haven’t had an opportunity to compete for a national team, I think college is a place to learn to play for your colors.”

Ramos went on to be a member of the ’90, ’94, and ’98 World Cup teams. He played professionally in Spain and the MLS, and was inducted into the National Soccer of Hall of Fame. But there’s another important thing to remember about him: He, along with the other directors of U.S. Soccer — including youth technical director Claudio Reyna — received a college education. In the end, these are the men making crucial decisions about the direction of youth soccer in this country.

Filed Under: US Soccer

See all US Soccer