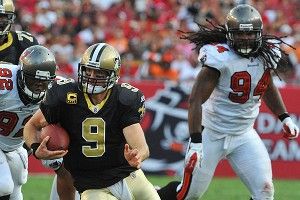 Now that we’re a mere 53 days away from the start of the 2012 NFL season, I have some good news for you … Drew Brees signed a five-year, $100 million extension with the Saints!!!!!! Why did that deserve six exclamation points? Well …

2. Brees was headed for the first defensible contract holdout in the recent history of team sports. When does that ever happen? Did you really want to sit around with your friends saying, “Yeah, I don’t blame Brees at all, playing for $16 million this season would have been totally insulting.”

6. What’s worse than reading about someone’s contract holdout every day? Even the hideous Dwight Howard trade quagmire is more fun — at least there, you can enjoy derisive Internet nicknames like “Dwight Coward” or derisive headlines like “Dwightmare”; you can make up fake trades for hours on end; you can watch Daryl Morey keep adding assets and doing everything but open a www.dwightorbust.com website; you can make jokes like “any time you can give up every asset you have AND take on multiple bad contracts for a wishy-washy guy coming off back surgery who doesn’t want to play for you and can easily leave in 11 months, you have to do it”; and you get to hear Chris Broussard and Stephen A. Smith drag out the word “Daaaaaah-wight” for five or six seconds at a time. Contract holdouts aren’t nearly as much fun.

Actually, there’s never been a fun contract holdout — not ever, not once — that I can remember. Just two seconds ago, I asked everyone at the Grantland office, “Has there ever been a fun contract holdout in sports?,” and everyone looked at me the same way they would have had I just dropped my pants and taken a deuce on Dave Jacoby’s desk. A fun contract holdout? What??? Are you popping pills again? So thanks to the goofy but lovable Benson family, thanks to Brees and his agent, and thanks to the Saints fans for whatever real and telepathic pressure they applied to get their franchise guy paid. We can wipe one totally annoying football story off the books. Fifty-three days to go.