The Unfaltering, Inexorable, and Victorious Detroit Tigers Are ALCS-Bound 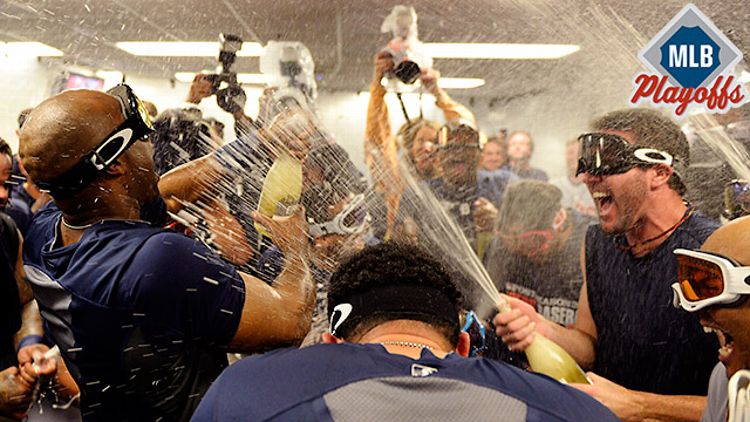 Five thoughts from the Detroit Tigers’ decisive 3-0 victory over the Oakland Athletics in Game 5 of the ALDS.

Justin Verlander won the Cy Young in 2011, and he should have won it again last year. This past season was less kind to Detroit’s marquee starter: He turned 30, broke up with Kate Upton, and was surpassed in the public consciousness by Clayton Kershaw. Verlander will likely finish behind two of his rotation mates (Max Scherzer and Anibal Sanchez) in Cy Young voting this year, and deservedly so. He was still better than most, but he looked mortal.

Until the home stretch, that is. Verlander has come through with a vengeance in recent weeks, going at least six shutout innings and registering double-digit strikeouts in each of his four starts since September 23. In Game 5 on Thursday, everything was working. Fastball, curveball, changeup, slider … all of it. He was missing bats, inducing weak ground balls, and striking out batters (10 of them) while striding off the mound before Tom Hallion had even begun his obnoxious twist-and-shout strikeout call.

Oakland’s first 16 batters came to the plate and then went back to the dugout before Verlander walked Josh Reddick in the sixth inning. Adam Wainwright admitted to feeling some nerves before his series-clinching gem on Wednesday night; by contrast, aside from a heaving breath every so often, Verlander barely seemed awake. He looked contagiously bored on the hill, so much so that I finally noticed how tight his pants are. I wish I could unsee it, and the A’s wish they could unsee Verlander.

For the second time in two days, a manager went out of his way to avoid a veteran starter in favor of a rookie pitcher with half a season’s worth of experience in a Loser Leaves Town match against one of the best pitchers of the past decade.

Pittsburgh’s Gerrit Cole was a more obvious choice than Oakland’s Sonny Gray, mostly because Bartolo Colon had a better year than A.J. Burnett (and because Burnett got eviscerated in his only postseason start). But both Cole and Gray boast the best raw stuff on their respective starting staffs, and while there’s nothing like an elimination game in the MLB playoffs, both were first-round picks with College World Series experience. This was hardly “You should start Wedman” territory.

Cole pitched pretty well, but ultimately lost. Gray didn’t pitch badly, but he lost too. He wasn’t locating as well early Thursday as he had last Saturday (when he pitched so well he earned Who’s That Guy honors), but he got by, facing the minimum number of batters through 10 outs. But in the fourth, he allowed five of six batters to reach in one stretch, including surrendering a two-run home run to Miguel Cabrera (more on that later). Gray engineered a miraculous escape with the bases loaded and reached the fifth inning down just two runs, then allowed two baserunners in each of the next two innings. His exit with two men on in the sixth inning was no doubt hastened by a Prince Fielder comebacker the inning before that broke Gray’s left thumb, literally adding injury to insult.

Gray was fine, and had this been a game against Seattle in June, his performance would’ve been a nonstory and he might have even walked away with the win. But he was facing Verlander in top form, and in that case “fine” simply isn’t good enough.

3. The Return of Cabrera

Over the past three seasons, Cabrera has been the best hitter in the game, winning three consecutive batting titles while belting 118 home runs. But he struggled late in the season while battling injury, posting a .333 slugging percentage in September that betrayed his near-total inability to hit for power. In each of the first four games of the ALDS, Cabrera had gone 1-for-4 with no walks and no extra-base hits.

But when Gray, who’d recorded three scoreless innings without looking particularly precise with his location, left a fastball up and on the inner third, Cabrera got around on it in a flash and put it over the wall. It wasn’t a tape-measure shot — it was more of a big pop fly — but Cabrera got it out.

As much as we lionize athletes who play through injury, there’s a point at which even the best players are so diminished by physical impairments that their teams would be better off without them. One could argue Cabrera was at that point. But no matter how injured he is, Cabrera will always be plenty capable of politely imploring the opposing pitcher to take that weak shit elsewhere.

With Verlander pitching so well, Cabrera’s home run felt like it had put the game out of reach. And sure enough, until Joaquin Benoit relieved Verlander and allowed a double to Jed Lowrie, then hit Yoenis Cespedes to inaugurate squeaky-bum time for Detroit, the A’s never really felt particularly threatening.

4. Something of a Pattern

Since the wild card was introduced, the Oakland A’s have gone to the playoffs seven times. Six times, they’ve lost in the ALDS in five games. I don’t believe there’s anything significant about this fact, nor do I feel good about bringing it up. But if I fail to mention it, y’all are going to think I haven’t been paying attention.

5. The Referendum on Moneyball

As depicted at the end of Moneyball, when the A’s lost in five games (shocker!) in the 2002 ALDS, Billy Beane famously said, “My shit doesn’t work in the playoffs,” and if you read point no. 4, you know that’s true: Under Beane, the A’s have made it to only one ALCS, where they got swept.

It’s been said that Oakland’s lack of playoff success somehow indicates that qualitative analysis and unorthodox roster construction are less suited to the playoffs than the regular season, and that every short-series loss reinforces the fact that building a team through heuristics and sheer brute force of economic might is the only way to win in October.

Of course, the counterargument is that drawing grand conclusions from 37 games played over 14 seasons demonstrates a risible ignorance of the very concepts that have allowed Oakland to punch above its weight for more than a decade. If the other 29 MLB GMs were as arrogantly ignorant and out of touch as the argument that “Moneyball doesn’t work because the A’s always lose in the first round,” Beane’s A’s would win the World Series every year.