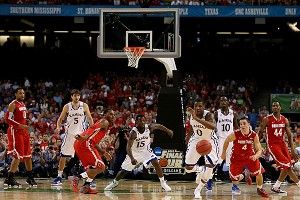 I was feeling very relaxed on my friend’s couch, watching Kansas slowly chip away at Ohio State’s lead. His dog, with whom I share a complicated relationship, had slipped comfortably under my arm, and there was a serenity about the basketball playing out in front of me. Unlike the blunt trauma of Louisville-Kentucky, the grating comeback and the harsh response and the brutal history hanging over it all, Kansas seemed to be sailing at a graceful tempo. They were bound to overtake Ohio State at just the right moment, like a drafting cyclist who had never faced the wind. I felt it, and I think the dog did too.

I wasn’t having visions, or anything that riveting. I couldn’t tell that Kansas would win until it was too late to feel prophetic. In fact, after the Kentucky win, the Jayhawks had seemed vulnerable enough that I boldly predicted an Ohio State championship Monday night. But the boldness soon seeped out of me, and even though the outcome didn’t immediately materialize, the resolve with which Kansas chipped away at the lead — and all the missed shots from Jared Sullinger and Deshaun Thomas and Aaron Craft — shadowed the game with a sense of steady inevitability.

I have a stupid theory about college basketball: The momentum a team carries with it into the locker room at halftime is more important to the final outcome than it should be. And I’m talking about the immediate momentum — what happens in the final minute, or the final 30 seconds. Last year, when Arizona beat my beloved Blue Devils in the Sweet 16, Duke held a 44-35 lead with five seconds left in the first half. Then Derrick Williams hit a ridiculous, lucky fall-away 3, and the margin was reduced to six. Arizona charged into the locker room on fire, and the Dukies shook their heads, thinking about all the bad luck the world has to offer. Am I crazy to think that there’s some immeasurable energy exchange that takes place in those situations, a one-way transfusion that drains one team and infuses another over 15 long minutes?

Probably, because anyone with an hour on their hands could find 30 counterexamples. But if Duke had held that nine-point lead, I don’t believe Arizona would have exploded for 55 points in the second half, slaughtering the hopes of a repeat title.

So, Saturday. 1:39 left in the first half. Thomas makes a jumper, Ohio State goes up 32-19. It’s a score that verges on embarrassing. Then Thomas Robinson hits a shot to make it 32-21, but Lenzelle Smith Jr. comes right back with two foul shots and the score’s now 34-21. Can you outscore an efficient defense like Ohio State’s by double digits in a single half? Can you overcome the mental block of double digits? The Buckeyes need a single stop to find out. But Craft, whose defensive reputation usually allows him to hack away at point guards without drawing a whistle, gets caught for a foul on Taylor. He pleads with his wide eyes and rosy cheeks and upturned palms to the ref, hoping for an apology, maybe, but instead Taylor nails both shots. 34-23, but now Ohio State can hold for the final possession. An 11-point lead should be the worst-case scenario. But Craft initiates maybe a fraction of a second too early, has his shot blocked by the lengthy Jeff Withey, and watches as Travis Releford’s layup rolls off his fingers milliseconds before the clock reads 0.0.

Score: 34-25. Nine points, and Kansas whooped it up on the way to the locker room. I’ll ask it again — am I crazy — or rather, how crazy am I — to think the game turned for good then and there? That the first seeds of doubt crept into the Buckeye minds and used the intermission to germinate and blossom, while the same phenomenon was happening with self-belief on the other side?

But when Releford hit his two free throws with 2:48 remaining to give Kansas its first lead since the early moments when nothing mattered, and when Craft turned to his teammates to complain with two seconds left instead of fouling and hoping for a miracle, it felt like the climax and denouement of a story that began with a buzzer-beater — a clock-defying layup that mattered more than anyone could have guessed.

And the Jayhawks, down to the last skin on their last teeth, are still hanging around.

I can’t watch any competition, not matter how small, without finding a side to favor. It doesn’t matter if I don’t know the participants, or if I lack even the faintest allegiance. Slowly, gradually, unconsciously, I’ll begin to pull for someone. It’s a chronic inability to be indifferent, and it extends to the most extreme situations. Sometimes I’ll watch my younger brothers play in a basketball tournament, and before they come on I’ll see the end of some irrelevant consolation game between two anonymous schools. By the end of that game, I’ll have picked a side to support, and I’ll be frustrated if they lose. It’s a congenital disorder.

And it’s changeable. So while I came in rooting for Kentucky, and maintained that perspective for the first half, it was hard not to get caught up in the Louisville comeback. The Wildcats weren’t playing the beautiful basketball we’d seen against Indiana and Baylor, a fact owing itself to the even-better-than-expected Louisville interior defense. It was the classic scenario of the undermatched boxer, with Louisville coach Rick Pitino and the Cardinals absorbing blow after blow, showing a strong chin but no evidence of any offensive weapons. They couldn’t really shoot, they couldn’t fast break, and they couldn’t hope to stop Kentucky forever.

All they could do was take the hits, keep the margin reasonable, and hope for some luck. And when Peyton Siva hit his game-tying 3 with 9:13 left, it was hard not to get caught up in the gritty excitement of it all. Because in this game, to maintain any semblance of stability in the state of Kentucky, the Wildcats had to win. They were the best team, the national champions crowned weeks ahead of their time, and they had the most to lose against their rivals. Falling to Louisville under those circumstances would be a devastation beyond reckoning, while the Cardinals were merely a team who looked very mediocre before the unexpected run that began in the Big East tournament.

And yet there they were, sending shivers of panic into Big Blue Nation, going beyond the heresy of hanging around and audaciously threatening to upend an entire state. It was thrilling and terrifying.

But also, it was nine minutes too early. Previous incarnations of freshman-heavy contenders might have wilted and collapsed under that kind of scrutiny, but there’s always been something special about John Calipari’s team. At the moment of highest volume, they composed themselves long enough to remember that Louisville was in a different, inferior class. Michael Kidd-Gilchrist woke up, the Louisville offense went to sleep, and Kentucky counterpunched its way to a win that looked easier than it must have felt.

And that’s what makes tonight’s championship so exciting. The wilting flowers have been been weeded out. Ohio State and North Carolina, the two teams with the talent to match Kentucky, could never quite rise to the Wildcats’ level of greatness. They met a resilient foe in Kansas — a team that came up a hard way, taking its rib-breaking kicks and rising up angry — and all the institutional weakness was exposed. But unlike the almost-greats, Kentucky has outpaced its biggest challengers, winning with guts on the rare occasions when talent wouldn’t suffice.