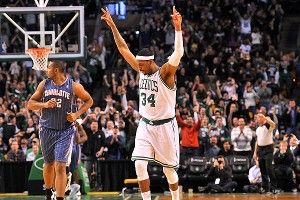 On Tuesday night, in a 94-84 Celtics win over the Bobcats, Boston’s Paul Pierce passed Larry Bird for second place on the Celtics’ all-time scoring list. It came on a 3-pointer early in the third quarter, and followed a string of rattled 3s and crowd gasps earlier in the game. When he hit the milestone, Mike Gorman, the Celtics’ play-by-play guy, let out a crisp “GOT IT” — a phrase he traditionally reserves for game-winners or knockout shots.


Pierce ambled up the court, turned himself around, raised up his arms, then kind of just patted himself on the side a couple of times. Maybe he didn’t know how else to express his appreciation for the crowd’s roar. All week, Pierce had talked about what beating Bird’s record would mean to him — it would mean he had played in Boston a long, long time.

I never saw Bird play in person. I’ve watched Pierce his entire career. The Celtics scooped him up in the 1998 NBA draft, and he spent the summer shooting jumpers in an empty gym, chanting the names of all the guys picked ahead of him. Not to read way too much into something that maybe actually just happened once and has been rote-repeated into Pierce lore — but doesn’t that say it all?

Earlier this year, Stereogum’s Tom Breihan wrote that Kanye West once had a “runt-of-the-litter defiant arrogance.” That’s exactly what I see in Pierce. Nothing about him is hip or smooth. You’d think by now, he’d be able to properly celebrate a rad play, but he’s still not that suave. The best example of this was Paul’s game-winner against the Knicks last year, when his awkward lapped salute at MSG almost gave Nate Robinson permanent brain damage. Here is an illustrative GIF.

Above all, of course, is his game. Elite swingmen in this league are supposed to be transcendent physical specimen, lighting quick and mythically strong. On the other hand, I distinctly recall reading a prescient article years back that described Pierce’s drives to the basket as “sedan paced.” He gets to the basket, eventually, often on a combination of moves; he cobbles together feints and dips to clear just as much room as he needs to finish. When, occasionally, he does get up to cram the ball, I often worry that he’ll land awkwardly on an ankle. I’ve seen him come through over and over in clutch situations; I’d say 90 percent of the time, that’s meant an unadorned step-back jumper. And not even a particularly elegant step-back jumper! But he gets to his spots, and he makes his shots. Over and over.

Now is that not the most endearing possible trait an NBA player can have? You can keep your players like Dwyane Wade and LeBron James, with their rafter-grazing abilities: watching Pierce’s janky, slugged-out game for 13 years (holy shit, 13 years) has been a singular delight.

In 2002, Pierce and his running mate Antoine Walker brought the team out of the post-(original) Big Three dark days (what is good, Eric Montross?) and into something resembling success: a conference championship appearance against the New Jersey Nets. Our then-coach Jim O’Brien wasn’t much of an offensive brain. ‘Toine got to shoot as many 3s as his insane heart desired, and our best play was a clear-out to Pierce on the block. It wasn’t pretty, but goddamn it was fun.

I was in the house for Game 3 when the Celtics overcame a 21-point deficit in the fourth to beat the Nets. Paul had 19 points that quarter. He put his head down, pushed through, got to the free throw line again and again. They didn’t win another game in the series, but that comeback tided me over for years.

Things were bad for a while, again. In 2007, Paul missed a grip of games, and the team lost 18 in a row. Then Danny Ainge traded for Ray Allen, and Kevin Garnett, and — boom — the Celtics were title contenders. And then champions. And Pierce, rightly, was punching the MVP Finals trophy over his head. I couldn’t believe it. While the championship was sweet enough on its own, watching Pierce elevate his game around his elevated teammates was a revelation. Instead of stifled iso plays, it was fluid ball motion, and Paul directing traffic beautifully.

I’d gotten to a point where I prided myself on knowing when Paul was going to miss free throws. After years of research, I’d learned that Pierce was prone on missing the front end of a pair in certain situations. Sure, I don’t have concrete proof; it was more of an intuitive thing. I know you’re not going to believe me, but I swear, my accuracy is high. (I also like to shout out these predictions — “He’s gonna miss the first!” — in crowded bars, and then watch a bunch of people avoid eye contact.) Here was a guy that I felt I knew this well, pushing his game to its most gratifying heights, showing off stuff I’d never before seen from him.

The title helped cement Pierce’s status as a Boston legend; a second one would have been particularly nice. Here’s the terse statement Bird provided for the highlight reel they showed at the game: “He’s a great scorer, and he won a championship, so he’s right there with the rest of us, as far as I’m concerned.” This is a town of champions, etc. Personally, though, I didn’t need him to win a title to prove anything to me. And that’s because of the stabbing.

No one in Boston talks about it all that much anymore, and why would you want to: Pierce is healthy, he’s moved on, he’s winning. But that’s the point. That “runt-of-the-litter defiant arrogance”? That at least partially stems from that September night in 2000 at a now-shuttered downtown nightlife venue. The way I’ve always understood it, Pierce was getting the attention of the ladies in the house that night, which sparked the argument. A group of guys took offense, and attacked him; he was hit over the head with a bottle and stabbed 11 times in the face, neck, and back. That season, he played all 82 games.

The story of Benzino is a bizarre farce. In the early ’90s, he worked his way into control at The Source, then the overriding editorial authority on hip-hop, and drove it into the ground trying to use it to build his career. Back then, a perfect “five-mic” rating from The Source was a rarified hip-hop accomplishment. In 1999, through backroom machinations, Benzino landed the Made Men’s Classic Limited Edition four-and-a-half mics, and broke that sanctity forever. He then tried to start an atrocious, desperate, grasping-for-attention feud with Eminem, and was destroyed. A few years back he tried to separate himself from the stabbing, saying, “People gotta understand that Boston is such a small community that if everybody goes out to the same nightclub, and something happens, my name … was like the biggest name to call out when something goes on. It was a situation where there was a fight, an incident, and Paul, unfortunately had got hurt within the scuffle. I can say that I had nothing to do with it.”

He is a horrible person, a blight on rap music. And that means incidentally, weirdly, Paul Pierce, just by persevering, exists, in my head, as a positive force in the name of all that is good in hip-hop.

That club was right by South Station, where the Greyhound from New York gets in. I like to point it out to people when I pick them up: “That’s where Paul Pierce got stabbed.” They usually nod, offer no comment. It’s also right by an after-school program in Chinatown that I used to work for, where I mostly begged kids to write down any sentence other than “I like PlayStation” for their English comprehension homework. We used to get lunch at the food court almost right across the street. That was a really long time ago. It feels like a really long time ago. Back then, I never would have thought Pierce would have won a championship in a Celtics jersey. I never would have thought he’d top Bird, either.

After Tuesday night’s game, Doc Rivers said, “The part I wish people wrote more about Paul: Paul had a chance to leave us when we were bad. And instead of moaning that he wanted to go to a championship team, he stayed. And he said, ‘I simply want to be a Celtic and I trust that we’re going to win a title some day.’ He had no reason to believe that, at that time. I mean, we were pretty awful. I do think it’s special that Paul Pierce decided that he wanted to be a Celtic for his life. And I think that’s pretty cool.”

This is maudlin, mushy, exactly the kind of thing a coach would say in this situation. But this is the truth.