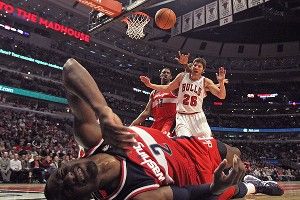 Will Jeremy Hit the Wall?

You could say cheering for the Washington Wizards requires a sense of humor this season. If this is true, it means Grantland contributor, semiregular B.S. Report guest, and longtime/long-suffering Wizards fan Joe House is basically the basketball fan version of the second season of Chappelle’s Show.

The Knicks visit the Wizards on Wednesday night, and if you’ve got a sense of hearing, you can hear Vio-Lins. That’s right, Jeremy Lin versus John Wall, two point guards passing each other, albeit briefly, on the the up-and-down escalator of NBA adoration.

This is not the first time these two have squared off. Aside from the legendary Harvard vs. Kentucky offseason croquet tournament, Lin and Wall also did battle in 2010.

Because he has a subscription to the “Washington Wizards Players Being Humiliated by Players Picked Way After Them (or Not at All) in the NBA Draft” YouTube channel, House tipped us off to the footage:

This is probably not very fair to John Wall, since in all likelihood Wall was thinking about whether he could make it to the 9:45 p.m. showing of The Twilight Saga: Eclipse that night and was giving very little thought to the fact that an undrafted point guard going nuts on him in a summer league game was going to one day garner almost 875,000 hits on YouTube. Well, John Wall … now you know!

For … the Sunshine State Showdown? I can’t even come up with a name for the Heat-Magic “rivalry.” But they are playing Wednesday. Also, League Passers might want to take a pass at Rockets-Blazers. The Pacers are playing Atlanta, but it’s in Atlanta, which makes for about as compelling television as the Brooklyn-Queens-Expressway closed circuit channel.

Quote of the Day: Kevin Garnett

Had someone come up to teenage Kevin Garnett and told him where he and his buddy Paul Pierce would be today, what would Kevin Garnett have said? “I would totally believe them. I would totally believe them. I’d be like, ‘You’re crazy as hell but I believe you.’ It’s good that we can sit back and joke about holes in our shoes and playing with itty-bitty shorts and all this other stuff, and then to be full circle right here, it’s great. So congratulations to The Truth.” Hat tip to Jessica Camerato. And hat tip to The Truth.