The Tigers’ Disastrous Bullpen Committee of None 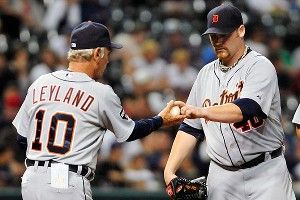 When a manager employs a bullpen-by-committee — let’s junk that term forever and call it what it is, a bullpen-by-matchup — he usually does so because he lacks the kind of archetypal, fire-breathing closer who takes decisions out of his hands. When you’ve got Mariano Rivera or Aroldis Chapman standing by, you can shut off your brain, play your rockin’ closer intro, and that’s that. If you’re going to use a bullpen-by-matchup, you’ll likely need to leverage a group of capable but flawed pitchers: lefties and righties with big platoon splits, maybe a combination of ground-ball and fly-ball pitchers, too. That takes prep work, nuance, and foresight.

Jim Leyland showed none of these things on Wednesday. And now, just three games into the season, the Tigers find themselves in an uncomfortable situation, one that’s their own damn fault.

Leyland seemed to handle his first crack at managing a matchup-based, Jose Valverde–less bullpen reasonably well on Opening Day. Detroit entered the 9th inning of Monday’s opener ahead by two runs. With right-handed power hitter Josh Willingham slated to start the inning, the Tigers skipper kept righty Joaquin Benoit in to face his fifth batter of the day. Benoit induced a harmless pop-out. Leyland then handed the ball to Phil Coke. The veteran lefty has an amazing background, but also terrifying splits: Lefty hitters have batted just .232/.286/.336 against him for his career, but right-handed swingers have pasted him at a .301/.371/.435 rate (.396/.446/.604 last year!).

Benefiting from the friendly matchup against lefty batter Justin Morneau, Coke threw a wicked slider out of the zone that caused Morneau to go around for strike three. Next up was switch-hitter Ryan Doumit. Though Doumit would bat right-handed in this spot, thus creating a lopsided matchup on paper, he’s actually much better swinging from the left side (.278/.336/.466) than from the right (.258/.319/.391). With the tying run still in the on-deck circle, and Doumit not being much of a lefty-masher, Leyland left Coke in. A lazy, game-ending fly out to right followed.

It wasn’t all smiles und sunshine. Leyland didn’t have anyone warming up behind Coke. Up two, with two outs and nobody on, that might’ve seemed a trivial point. But had Doumit reached, Coke would’ve had to face righty-swinging Trevor Plouffe, who’d have been big trouble as the potential tying run, with a career line of .269/.339/.524 (13 homers in 208 career at-bats) vs. lefties. Doumit lined out to right, Coke got the save, and no damage was done. But Leyland’s apparent lack of contingency plan, lack of preparation, and the subtle hint that he might want to bypass the bullpen-by-matchup structure and just go with the guy who got two big saves in last year’s playoffs should have been worrisome for Tigers fans.

Two days later, it all hit the fan. Once again, Benoit got through the eighth without allowing a run, then came back out to face the leadoff batter in the ninth, a righty. This time, that hitter (Plouffe) drew a walk. Leyland made the call to the pen, bringing in Coke to face lefty hitter Chris Parmelee, who promptly flied out to right for the first out. That brought Brian Dozier, a right-handed batter, to the plate. A .234/.271/.332 hitter last year, Dozier didn’t appear to be a big threat. But with the Tigers leading by a single run, a man already on base, righty eraser (and better pitcher, period) Octavio Dotel available, no one left on the bench for the Twins, and untested, switch-hitting rookie Aaron Hicks in the hole, yanking Coke should have been a no-brainer. That’s how you’d treat a situational lefty in the sixth or seventh inning. No reason to do it any differently in the ninth.

But at the risk of inferring too much from a couple of appearances, it seems clear that Leyland didn’t think of Coke as a situational lefty. Rather, he was the team’s closer — maybe not the 49-for-49 monster that Jose Valverde was two years ago, but still hopefully someone Leyland could rely on to finish games. If the thought of platoon splits ever crossed the manager’s mind, that was never evident, not from the way he used Coke, not from his lack of urgency to have a right-hander ready behind him, not in any way.

The Twins would end this one in a hurry. First, Dozier lashed a single to center, advancing pinch-runner Jamey Carroll to third. Apparently not convinced Coke would be a bad matchup against the right-handed-hitting Eduardo Escobar, Leyland left his lefty in. Escobar then blasted a shot to deep left-center. At the very least, his long drive was going to result in a game-tying sacrifice fly. But when Austin Jackson and Andy Dirks couldn’t decide who was going to get it, the ball bounced between the two Tigers outfielders near the wall, resulting in a two-run, game-ending double. Twins 3, Tigers 2.

What did the Tigers do the next day? They signed Valverde to a minor league deal. There’s nothing wrong with the move, by itself. Valverde wasn’t nearly the pitcher in 2012 that he was in 2011, having struck out two fewer batters per nine innings last year while giving up a lot more runs, both on an absolute basis (ERA up to 3.78 from 2.24) and on a defense-independent basis (xFIP surged to 5.01 from 4.01). But he also cost basically nothing to bring in, and there’s no reason not to take a look at a pitcher one year removed from a big year when the cost is more or less nothing.

If Valverde doesn’t pan out, this still wouldn’t be a crisis by any means. The Tigers have a loaded starting rotation, a star-studded lineup that’s getting further boosts this year with Torii Hunter on board and Victor Martinez returning from injury. If Valverde’s not the answer and Leyland won’t trust Benoit or Dotel to close, nor play matchups the way he could, Trader Dave Dombrowski and his aggressive financier Mike Ilitch likely won’t hesitate to reel in a closer before the deadline.

The bigger disappointment is that we might’ve already seen the end for the Tigers’ bullpen-by-matchup plan. Which is a damn shame. Someday, some team’s going to use a full-fledged bullpen-by-matchup structure, with a group of pitchers with complementary skills and a manager who’s patient, thoughtful, and not afraid of the criticism that’ll come the first time someone blows a save. When that day comes, this team will have an edge over nearly everyone else, able to match up with any hitter in any situation, when the stakes are highest. Short of having a Sandman or Cuban Missile at their disposal, this could be the next best thing.