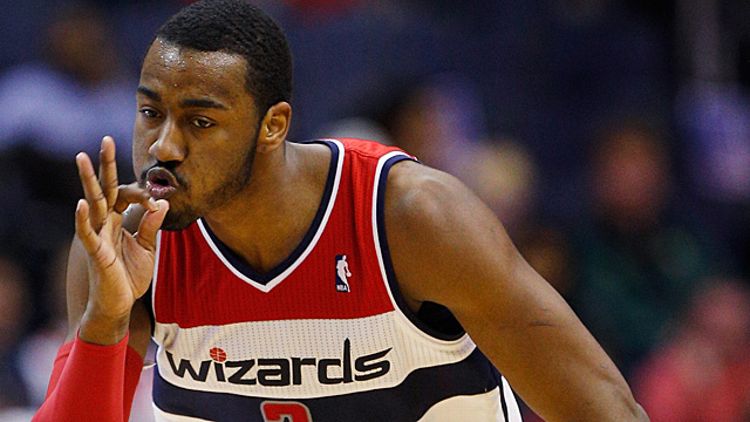 Back on March 25, the Grizzlies and Wizards were playing a game at the Verizon Center. The score was only 4-4 when Zach Randolph missed an 11-foot jumper along the left baseline. The rebound came down into the hands of Washington’s Emeka Okafor, who quickly fired a long outlet pass to John Wall, who dribbled across midcourt and attacked Memphis’s transition defense. As Wall weaved toward the free throw line, Steve Buckhantz, the Wizards play-by-play guy said, “Here comes Washington with Wall who cuts into the middle.”

The shot fell and he noted, “Very confident. I mean his game has come to a new level right now.”

Four quarters later, this confident version of John Wall had made 13 of his 22 field goal attempts and scored a career-high 47 points to go along with eight assists and seven rebounds. The Wizards beat the Grizzlies by 13 points, and Wall provided the NBA with a reminder of why he was the first overall pick in the 2010 NBA draft.

When we talk about alignment in the NBA, we talk about how well players and teams play to their strengths. For example, when the Heat get Ray Allen good shots in the left corner they are aligning their strategies with their strengths. When the Celtics design sets to get Kevin Garnett open looks from 17 feet they are doing the same. The frustrating flip side is when players or teams are highly active in areas where they are not very efficient. For years, the NBA’s poster boy for misalignment has been Atlanta’s Josh Smith. Although he clearly possesses tremendous basketball talent, it’s well-established that Smith and his coaches fail to realize his on-court potential, in part because he spends too much time jump shooting and too little time near the basket.

If it weren’t for Smith, perhaps Wall would the league’s most misaligned player.

Over his first few seasons, it would be fair to characterize Wall’s jump-shooting behavior as extremely active and terribly inefficient. He loves to shoot 2-point jump shots outside 10 feet. In his first two seasons in the NBA, Wall shot 757 such shots. He made only 224, or 29.6 percent. 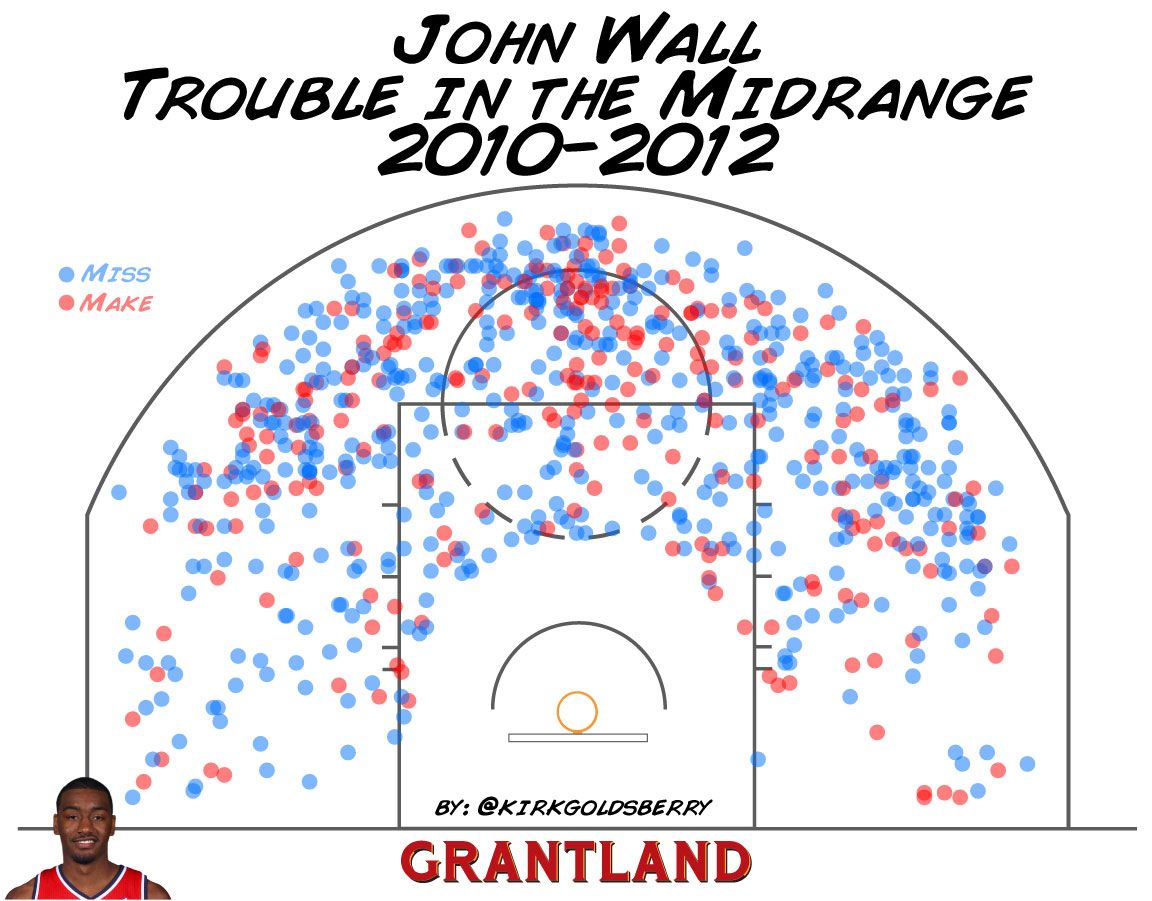 As a point guard, Wall has been shooting in the right spots; he just hasn’t made those shots. And his inability to hit those shots has shackled every other aspect of his offensive game. When NBA guards can’t shoot, NBA defenses behave accordingly (see Rondo, et al. 2012). They lay back; they dare you to shoot and take away your drive. If a team sags off Chris Paul or Kyrie Irving they will be punished. The same cannot be said of Wall, or at least until very recently.

As of April 5, Wall is on a tear. Since Bradley Beal hurt his ankle in early March, the Wizards have relied upon Wall to score more points. He has done that and more. His incredible March breakout has given Wizards fans something to watch, and perhaps something to look forward to. All of a sudden Wall is making his jumpers, and all of a sudden he’s emerging as the player many thought he could be. 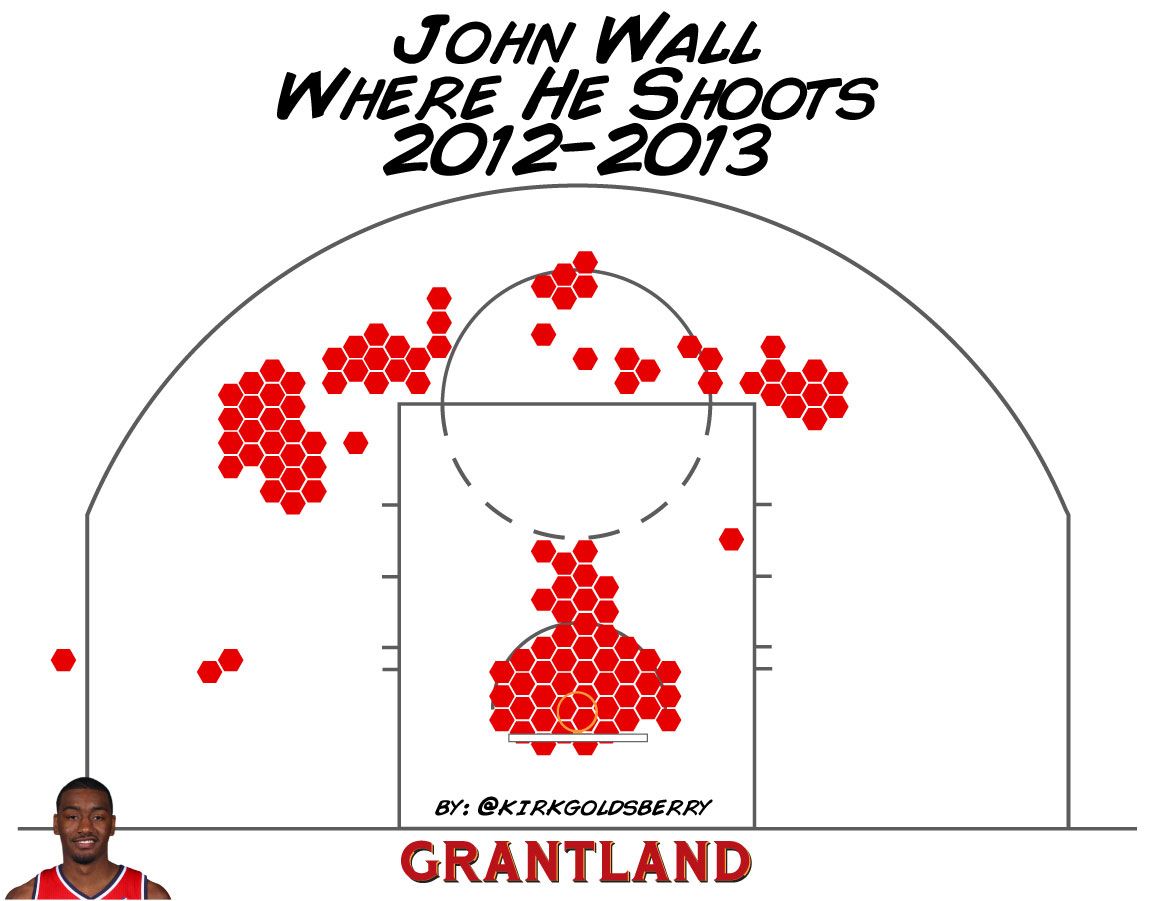 Wall’s shooting structure is really only about two key regions: the midrange and at the rim. In the midrange, his favorite shot is a free throw extended jumper on his right side. Since March 1, Wall has made 37 of his 64 attempts in this zone, good enough for 57.8 percent. In this same zone, during his first two seasons he shot 62 of 188, or 33 percent. Overall this season he’s 55 of 108 from this zone, 51 percent.

Since returning from injury in January, Wall has clearly established himself as the most valuable basketball player in Washington. The Wizards were blindingly awful without him and are actually pretty good with him. In the 33 games Wall missed this year, the Wizards went 5-28; they’ve gone 23-19 since his return, a stretch where they’ve beaten teams like the Knicks, Nuggets, Rockets, Grizzlies, and Lakers.

Similarly, over the past month or so, Wall’s jumper has established itself as the most critical component of the Wizards’ success; it’s not only a make-or-break thing in Wall’s game, it’s a make-or-break thing for that whole team. Going forward, if Wall can make that shot, it opens up their entire offense.

The Tigers' Disastrous Bullpen Committee of None