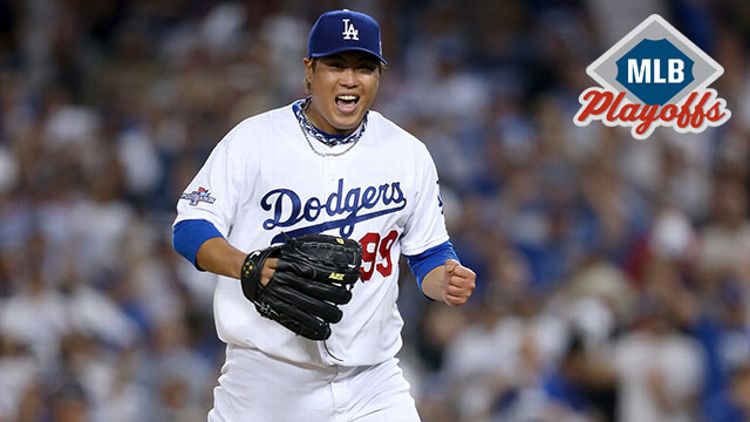 Like every playoff battle, Game 3 of the National League Championship Series featured its share of moments worth dissecting. But in the end, the story of this game, and the reason the Dodgers trimmed their series deficit to 2-1, can be boiled down to a simple happening: Hyun-Jin Ryu blasted the Cardinals.

The Korean rookie left-hander plowed through the Cards lineup, twirling seven shutout innings and allowing just three singles and one walk while striking out four. In a way, that outcome qualified as a major surprise. In his previous start, Ryu pitched terribly, ceding four runs on six hits and getting knocked out against the Braves after just three innings. More than just the numbers, Ryu struggled to locate his pitches throughout his short outing. The combination of that poor performance, a back injury that knocked him out for one start in September, and … something prompted whispers that Ryu might not be completely healthy.

Once the injury speculation died down, Ryu presented a brutal matchup for the Cardinals. Putting aside his NLDS fiasco, he put up excellent numbers all year long, tossing 192 innings with a 3.00 ERA and 3.24 FIP, the kind of results that would make him a leading Rookie of the Year candidate in a season that wasn’t stuffed with monstrous first-year performances. Ryu also had a chance to expose a rarely discussed Cardinals weakness. St. Louis led the National League by a mile in runs scored with 783 (4.8 per game); the next closest team was the Rockies, who even in the hitters’ haven of Coors Field scored a relatively modest 707. Yet the Cards owed a great deal of their offensive success to historic numbers with runners in scoring position. If those numbers were ever going to regress, St. Louis risked being exposed as merely a pretty good offensive team — and a downright terrible one against left-handers. The team’s .238/.301/.371 mark against southpaws ranked 26th in the majors. Strip out the injured Allen Craig (.273/.311/.468 vs. left-handers in 2013) and replace him with Matt Adams (.231/.231/.423 vs. lefties, albeit in just 52 at-bats), and the Cardinals lineup looked even worse against Ryu … a pitcher who’d shown reverse splits this year, but a lefty all the same.

In Game 3, Ryu needed 108 pitches to get through those seven innings, tossing 69 of them for strikes. His most effective pitch, on Monday night and all year long, was his changeup. During the regular season, Ryu threw his changeup 22 percent of the time, holding opponents to a tiny .172/.216/.219 line against it and generating more value from that pitch than any other starter except Cole Hamels. It was that pitch that was responsible for his reverse splits. On Monday he threw 33 changeups, a 31 percent usage rate. He induced four swings and misses with the pitch and squeezed more value from the changeup than from any other pitch.

Establishing his off-speed offerings also made Ryu’s fastball more effective. With two outs in the seventh and a runner on, the Dodgers convened a mass mound conference. Ryu would need to retire Adams to get out of the inning and likely end his start. Rather than nibble with the tying run at the plate, Ryu pounded the strike zone. The first four pitches of the at-bat were a Ryu rainbow, blending a fastball, changeup, slider, and curveball. Then, with the Dodger Stadium crowd on its feet, he fired a 91 mph fastball, high and just off the outside corner. Under other circumstances, Adams might’ve been able to lay off. But at the end of a night in which Ryu mixed pitches and pitch speed, targeting every corner of the strike zone, Adams got antsy. One big swing later, and Ryu’s dominant night was done.

In a game when the entire Cardinals team looked sluggish, Jon Jay looked worst of all. In his first at-bat against Ryu, he grounded out harmlessly to first. The stakes were higher his second time up, with Jay’s fifth-inning at-bat offering the Cardinals their best opportunity to score all game. With runners on first and second and nobody out, Ryu got ahead of Jay 1-2. On the fourth pitch of the at-bat, Jay lifted a fly ball to left-center, where Carl Crawford made the catch. When pinch runner Daniel Descalso completely misread the play, Crawford lobbed the ball to second for a painfully easy double play.

Jay’s lack of offense (he did single off Brian Wilson in the eighth) wasn’t the worst part of his game. Instead, it was his horrific defense.

With two outs in the first, Hanley Ramirez lifted a high popup to shallow center. It’s not clear if Jay was playing incredibly deep on the play on his own accord, or if he was ordered to do so. Either way, playing that deep made no sense, given that Ramirez was playing with ribs so badly injured that there were serious questions about whether he’d even be able to play, let alone drive pitches deep. Instead of a fairly routine catch, Ramirez’s dying quail landed just out of second baseman Matt Carpenter’s reach, with Jay reduced to simply watching the ball drop in. Courtesy of Dodgers blogger and GIF master Chad Moriyama, we can see the carnage for ourselves.

In the fourth inning, Mark Ellis led off with a fly ball to right-center. Jay and Carlos Beltran converged on the ball, but as the center fielder, the call was Jay’s to make. Instead, Jay pulled a Wil Myers, backing off at the last second and allowing the ball to drop in for a double. That mistake triggered a two-run inning that provided all the offense the Dodgers would need for the night.

Jay wasn’t done yet. Leading off the fifth, A.J. Ellis drove a pitch to deep right-center. Jay had a long run to track the ball down. Still, a center fielder with better anticipation, better range, or better raw speed would’ve been able to pull off a challenging but certainly makeable play. Instead, Jay sprinted after the ball, reached it just as it was coming down … and failed to properly open his glove, the ball doinking off his leather and onto the ground for a rare Ellis triple.

The final blow came in the eighth. Crawford hit a sinking liner to center, forcing Jay to charge in. This might’ve been the toughest of the four plays to make, or at least the toughest if Jay weren’t backed up to Phoenix on Ramirez’s first-inning Texas Leaguer. Still, this was another ball that might’ve been caught by a more skilled gloveman. Jay dived for the ball and missed it by a few inches, not because it was out of his reach, but because he dived to the wrong place.

As much as the Dodgers’ offense got maligned for its poor performance in the first two games, L.A. has now outscored St. Louis 5 to 4 in the series. The high-leveraged hits that seemed to drop from the sky during the regular season have dwindled in October. That has exposed the Cardinals’ weaknesses at the bottom of the lineup: shortstop Pete Kozma, who isn’t nearly good enough to start for a championship-caliber team, but also Jay, a player who got a pass during the first three years of his big league career because he was a .300 hitter. With minimal power, few walks, merely decent speed, and lousy defense, Jay was only a functional player this year. And against left-handed pitchers, he’s a liability, hitting .269/.343/.346 for his career and a miserable .220/.306/.314 in 2013.

The problem is, the Cardinals have few viable alternatives. Craig’s injury meant Adams had to be promoted to the starting lineup, making a thin bench even thinner. The alternative to Kozma is Descalso, who between his flaccid bat and weak defense was a sub-replacement player this year — and even he might be needed elsewhere for Game 4, after David Freese was forced to leave Monday’s game with a calf strain. Mike Matheny hasn’t shown much willingness to give promising young hitter Kolten Wong decent playing time, so it’s Descalso who might end up starting at third if Freese can’t go tonight. Meanwhile, the only alternative to Jay in center, at least against lefties, would seem to be righty-swinging Shane Robinson. Problem is, he’s a weak hitter regardless of who’s on the mound.

In a series that looked to be the Cardinals’ to lose, the tide has started to turn. Clayton Kershaw figures to give St. Louis fits in a potential Game 6, and Ryu could renew his own mastery of the lineup if we get a Game 7. As of now, the Dodgers are saying they’ll start Ricky Nolasco in Game 4, thereby going with the weakest of their four starters, a right-hander who projects as a favorable matchup against the Cardinals’ righty-mashing lineup. Whether it’s Nolasco, or Zack Greinke on short rest, the Dodgers likely come in as either an even-odds bet or possibly slight underdogs tonight. If the Cardinals don’t take care of business, watch out. With Ramirez and Andre Ethier back in the lineup, and the rest of the Dodgers’ rotation well-positioned to exploit the Cardinals’ offensive weaknesses, a big shift could follow.