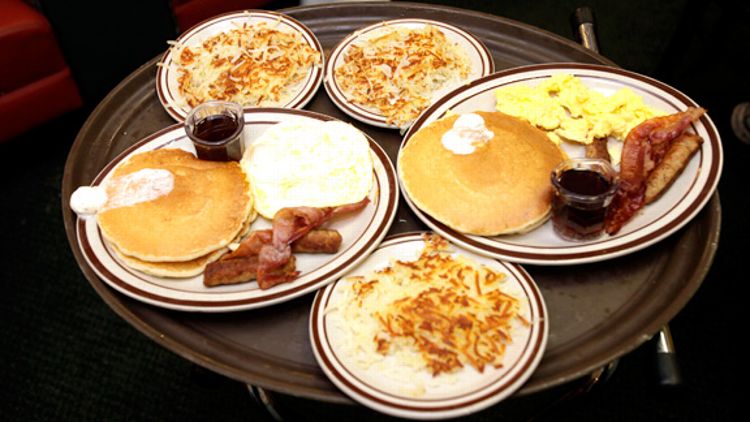 On Thursday night, the New York Yankees set a record with three grand slams in a single game. The magical evening brought the grand slam back into the forefront of the national discourse, and today it’s barely an overstatement to call it the most significant part of human society. In honor of the brave new grand slam world, here’s a list of the 10 greatest grand slams since the beginning of time.

Grandy’s eighth-inning shot officially set the record for the Yanks, who are known in baseball circles as America’s most beloved team (citation needed). In a historical context, this grand slam is a little bit like the Falklands War — brutal and gratuitous, but interesting. And on the topic of wars …

I’m no Tom Brokaw, but I can recognize a great war when I see one. For my money, World War II was one of the real dandies. There was a lot at stake; I think it’s fair to say there were some leadership issues with the axis powers. So it’s a good thing it turned out the way it did, and Great Britain’s grand slam bomb played a part in ensuring a good outcome. They started to develop this baby in 1943, and used it to destroy bridges in 1945. It was a type of “earthquake bomb,” and as a survivor of this week’s East Coast earthquake, I feel a special connection.

Speaking of the British and slams, what’s your favorite Winston Churchill comeback? Here’s mine:

Woman: If you were my husband, I’d poison your drink!
Churchill: Madame, if you were my wife, I’d drink it.
A hip British Lord nearby: “BURN NOTICE! DR. DIS TO THE BURN WARD!”

To be honest, I don’t have a lot of experience with Denny’s and its infamous combo meal, so I turned this one over to my friend Matt Finucane, Chiefs blogger and all-around gourmand:

“The Grand Slam can be summed up in one phrase: greater than the sum of its parts. Are the eggs good? No. Is the bacon good? Of course not. Are the hash browns good? Rarely. Is the Denny’s Grand Slam good? Undoubtedly.

“Some will say it gets an unfair advantage due to the predominantly altered state of those usually doing the ordering. I can’t speak to that. What I can speak to is that if I’m hungry, and you offered me a Grand Slam, I would happily eat every poorly cooked bite. At any time of day. Few other meals can boast such versatility.

“Plus, it’s pretty good for you, I think. Our bodies turn all that food into energy.”

As we all know, the Grand Slam of Eventing is an equestrian series made up of three events: the Rolex Kentucky Three Day, the Badminton Horse Trials, and the Burghley Horse Trials. To win the grand slam, you must capture all three events. For years, horse pundits* said it couldn’t be done. Then came Pippa Funnell, and her glorious streak in 2003 on the back of Supreme Rock and Primmore’s Pride. Who can forget when she finished the last jump at Burghley, breeches shining in the Lincolnshire sun, and it dawned on us all that we’d just seen the unthinkable? I still get horse bumps when I think about it. That’s right — I called them horse bumps. That’s how important this was.

*Human beings who talk about horses, not actual horses commenting on their own sport. Although to be honest, the horses were also unnecessarily negative about anyone winning the grand slam.

You know what’s always bugged me about this Grand Slam? It involved two amateur championships. I don’t want to take anything away from Jones, but shouldn’t that come with a huge asterisk? If the professionals aren’t competing in two out of the four majors, can it really count as a legitimate Grand Slam? I don’t know. I can beat every 10-year-old one-on-one in the local youth league, but do they give me a championship trophy? I just get treated rudely and kicked off the court. (Fair, that may not be the best comparison.)

Still, golf is the most pressure-packed sport going, and Jones deserves kudos for what must have been an absurdly stressful summer.

5. The Grand Chelem, Formula One Racing

I had never heard of this until today, but it’s incredible. A “Grand Chelem” (sometimes called a Grand Slam) can be achieved in Formula One only when a driver meets four requirements. First, he has to start in the pole position. Second, he has to win the race. Third, he has to record the fastest lap. Fourth, he can never lose the lead for a single moment in the entire race.

This would be even higher on the list if they included a fifth element (not that Fifth Element): Right before you win the race, you have to ram your car into the wall and finish with your car spinning around and smoking.

This is my little act of defiance. Was the Tiger Slam a “true” Grand Slam? No. He won four straight majors, but because they weren’t in the same calendar year, the powers-that-be tell us it doesn’t count. Still, this was one of the most impressive stretches in sports history. Tiger’s moral fortitude and unwavering talent made him my role model (“I am Tiger Woods.”) and that continues to this very day.

(I haven’t followed golf much in the past few years, so hopefully nothing weird happened to tarnish his legacy.)

Embarrassing confessions coming up, gang: As a kid, maybe 7 or 8, I was in love with Steffi Graf. How in love? So in love that I would borrow my mother’s tennis racket, retreat to my room, and pretend Steffi Graf and I were playing mixed doubles at a major. We would always be up against a team of two kids I didn’t like from school (yes, there were some authenticity issues with this fantasy: How did two kids ever make the Grand Slam final?), and we’d always win in dramatic fashion. Was there romantic tension between Steffi and me, you ask? Oh hell yes. It was palpable. You could cut it with a knife. And man, you can bet the girls from school were looking on in envy. Ol’ Shane just took on a new light in their eyes. Those were good times, and I was sad to see that age of imagination end when I turned 22.

Anyway, I was slightly too young to know what was happening when she won the calendar grand slam in ’88 — all four majors in a single year. In the end, I think our mixed-doubles partnership could only have slowed her down.

Hempleman-Adams was the first human being to reach the North Pole, the South Pole, and the “Seven Summits,” which include the highest mountain on each of the seven continents. That was good for the Explorers Grand Slam, a feat that only 20 people have since accomplished. But Hempleman-Adams was the first, and seriously, can you imagine a better name for an adventurer? He represents the perfect combination of dignified nobility and savage conquest. I’m out of breath just thinking about his epic coolness.

Have you heard about these people? Ultrarunners are insane and incredible, and the best chronicle of the whole phenomenon was written by Christopher McDougall in Born to Run. I won’t spoil anything, but I’ll say that the best part of that excellent book comes when a member of a tribe called the Tarahumara is trying to run down an American woman at the very end of a 100-mile race. When I started reading that section, I would have literally let my home get robbed while I hid in the closet to finish the chapter. I believe in the human spirit and trust that the robber would have taken only what he needs.

Anyway, ultrarunners are amazing specimens. And perhaps no two are more amazing than Karnazes and Liebenberg, who became the first men to finish the four different 250 kilometer (roughly 155 miles) desert races in 2008. The four races take place in the Gobi March, the Sahara, the Atacama Crossing (Chile), and Antarctica. This is truly the extreme limit of physical human accomplishment, and well deserving of the top spot.

Personally, I’ll continue to drive my car the 100 feet to the mailbox on days when the temperature gets hotter than 85, but I guess that’s the difference between the achiever of a grand slam and a simple scholar.