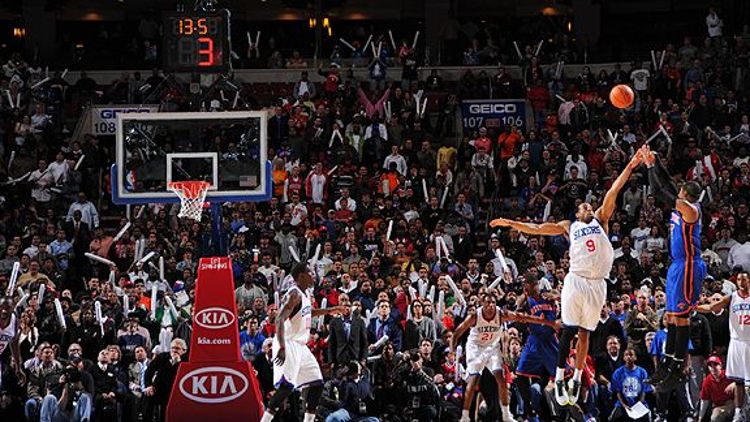 For … Knicks-Sixers!
In Philadelphia, you get your cheesesteaks wiz wit and you get your sports with hate. When you’re not hating on Andy Reid, Juan Castillo, Raul Ibanez’s peanut brittle frame, Brad Lidge’s satanic soul patch, or the ghost of Donovan McNabb, you’re hating on the New York Giants, the Atlanta Braves, the Dallas Cowboys, and the New York Mets. It’s just how we get down.

You’ll notice I didn’t mention anything having to do with the Sixers or the NBA there. That’s because you can’t hate if you don’t love, and nobody has loved, truly loved, the Sixers since the 2000-01 season, the apex of the Iverson era. That was the last time the Sixers ran the city, and the memories of those days — the playoff series with Vince “Late Registration” Carter’s Raptors and the Glenn Robinson/Sam Cassell/Ray Allen Bucks — are what most Philly hoops fans have been hanging on to for the last decade. The team hasn’t been relevant since.

[INCEPTION MUSIC] Until now. The Sixers — spurred on by the haunted face and hoarse teachings of coach Doug Collins and with a bench as deep as the watery, mafia-grave parts of the Delaware River (to say nothing of their awesome new announcer, Malik Rose) — are 7-2 and take a six-game win streak into Madison Square Garden tonight.

Neither franchise has covered itself in glory in recent years. But the different methods by which they have attempted to pull themselves out of the muck are worth noting. The Knicks, who feature two and a half men that could be plausibly considered All-Star caliber, who play in the world’s greatest arena in the world, have attempted to throw shade on their personnel flaws by shining all the light and spending all their money on three main stars. Iman Shumpert and Jeremy Lin may be Knick folk heroes of the Internet, but this team will go as far as Stack and Melo and Tyson Chandler’s backs can carry them.

The Sixers, on the other hand, have gone all Robert Altman Ensemble Cast in their construction. You might recognize a name like Iguodala or remember some guy called Brand, but this is a team with a blurry line between background and foreground players. On any given night, contributions can come from Spencer Hawes (btw, “working out with Shawn Kemp” is the new “working out with Olajuwon”), Evan Turner (would you spend a no. 2 overall pick on a bench-energy guy? Too late, you already did!), Lou Will Ville, or big, bad Thad Young.

This team was so deep they had to trade Mo Speights just to lighten up! Not because Speights was walking around quoting William James’ Varieties of Religious Experience (although … ) but because there simply weren’t enough quality minutes for the amount of quality players the Sixers have.

This is a team, perhaps unwittingly, built for this kind of labor-intensive season. Back-to-back-to-backs are a lot easier when Collins can run any combination of 10 players out on the floor. Nobody expected the team to get off to such a hot start, but now that they are, they’re winning more fans almost every night (did I mention Philly cats can be kind of front-runners?). That’s right. We’re falling in love.

Which brings us back to hate. Which brings us back to the Knicks. As an NYC-living Philly transplant, I don’t know if I have the emotional fortitude to hate another New York sports team. And without any reason to do so, I’m not going to stab a Tyson Chandler voodoo doll in the back with pins. But don’t underestimate the depth of my or any number of Philly sports fans’ hater reserve. I have been waiting ten long years to wish tabloid scandal and locker room unrest on some opposing basketball team. Tonight might be as good a night as any to get back on the horse.

Lob City vs. Miami Thrice (that never really took, did it?) is the marquee late-night game, but, for those not glued to the MSG brouhaha, Mavs-Celtics should provide some distinguished grey entertainment.

See yesterday’s Shootaround for an explanation on this section. I guess “swag” is back? Take it, ‘Dray:

“We should have confidence and some kind of swag about ourselves. We didn’t just win, we actually played well and we beat ‘em by 20, almost. And that’s something good to tip your hat on. That’s a team that beat a couple teams that we lost to. that means we’re improving.”

Stephen Jackson is feeling elemental about the return of Andrew Bogut: “It’s just as important as having air.”