The Shootaround: NBA News, Notes and Mike D’Antoni Thinks You Are Being Ludicrous 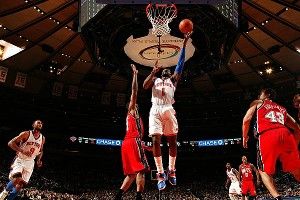 During the opening few weeks of the season, the Knicks played offense like a bunch of Quaalude addicts looking for an emergency exit in a dark movie theater. They just sort of bumped into each other and knocked over people’s popcorn.

The biggest issue, as we all know now, was the lack of a point guard who ran coach Mike D’Antoni’s (once critically acclaimed, then denigrated, and now celebrated again) offensive system. To see Jeremy Lin run these sets — always threatening with penetration, spacing out the floor, concentrating as much the roll as the pick — is to see D’Antoni’s offense in full flight.

As has been mentioned quite a bit, this Knicks-Lin renaissance has taken place while the Knicks’ two stars, Carmelo Anthony and Amare Stoudemire, have been absent from the team (Melo, due to injury and Amare, due to the death of his brother).

Amare is expected to return Tuesday night. If Lin’s ability to run the pick-and-roll with Tyson Chandler is any evidence, he and Amare should hit it off like Erick Sermon and Parrish Smith. Here’s the real question: What happens when Anthony comes back?

While he has played heroically through several different nicks, knocks, and injuries, Anthony has struggled to excel within the D’Antoni system this season. If the Knicks offense was like car traffic, Anthony was the Big Dig. (Sorry for blasphemously making a Boston reference in a New York sports blog post.) (Did they ever finish that thing?) When the ball came to him, everything ground to a halt.

It’s doubtful that simply playing with Lin will change Carmelo’s, shall we say, meditative habit of holding on to the ball. But don’t underestimate Anthony’s basketball intelligence or his desire to win. And besides, he sounds elated at the prospect of playing with Lin.

“I know there’s questions about, ‘Can I fit in?’ and stuff like that, but this is like a dream come true to me,” Anthony said. “It takes some pressure off of me. I don’t have to play point guard. I don’t have to try to get Amare 20 points, try to get this guy 20 points, me try to go out there and get 25-30 points a night, play defense, rebound do the whole thing.”

Remember, Anthony spent most of this season playing with Toney Douglas as his point guard. This is like getting a tour of the Louvre from Larry the Cable Guy. There is, of course the possibility that Amare and Melo will suck the life out Lin’s game and the Knicks will be right back where they were in early January. But, on this night of all nights, why not give love and Lin a chance? And if you don’t? Well, D’Antoni has something to say about that: “I think that’s ludicrous in a sense.”

For … Roy Hibbert and the Pacers to roll out the red carpet for the Heat. Also, try checking out the Thunder and Jazz.

Quote Of The Day: Kobe Bryant

With members of the Lakers front office checking out Gilbert Arenas in a private workout, Kobe was asked what he thought Arenas could bring to the Lakers: “Hibachi.”