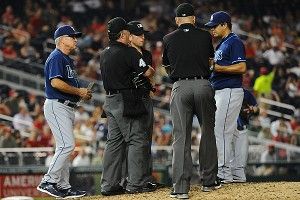 Tampa Bay Rays reliever Joel Peralta was ejected Tuesday night for having pine tar on his glove in the eighth inning of a 5-4 win over the Washington Nationals. Peralta played for the Nationals in 2010, and also for the Syracuse Chiefs (the team’s Triple-A affiliate) earlier that year when Nats first base coach Trent Jewett was the manager. Davey Johnson initiated the inquiry with home plate umpire Tim Tschida, who looked at the glove, found the pine tar, and made the ejection. Peralta, caught red-handed, tipped his cap to the Nationals as he walked off the field. Judging by precedent and the rulebook, he’ll likely be suspended for 10 games.

Once upon a time, a pitcher would do anything to doctor a baseball, writes Jonah Keri

Johnson said there was a rumor going around, in warm-ups and on the bench during the game, that Peralta had a fondness for pine tar. “Well, he pitched here,” Johnson said, when asked for the source. “I don’t think it’s a secret.” As he went out to Tschida, the umpire was grinning, and Johnson overcame his initial hesitation to request the glove check.

The reliever offered a muddled explanation after the game, saying it was his “batting practice glove” but refusing to explain how the pine tar got there in the first place. “I’m every day playing catch with it, it’s hot here,” he said. “That’s all I’m going to say about it.” He did stick around long enough to direct one final parting shot at his former team: “Good for them,” he said. “They still lose the game.”

Tampa Bay’s skipper was the most overtly angry of the principal characters, and responded immediately by requesting a check on Nationals reliever Ryan Mattheus next inning. In his postgame rage, when the adjective “cowardly” proved insufficient, he called the pine-tar check “a pussy move.” Twice.

His rationale was that many players use pine tar — “It’s kind of a common practice that people have done this for years,” he said — and it was unfair to single out Peralta. “Insider trading, man. It’s bush,” he said. “It’s bogus. That’s way too easy, right there.”

”I promise you one thing,” he added, ”you’re going to see brand-new gloves throughout the major leagues starting tomorrow, with pitchers on every major league ball club.”

There seems to be a belief among baseball people that exposing blatant acts of cheating is a violation of some self-protecting code. Things should be handled quietly, if they’re handled at all; look at the 2006 World Series, when Tigers starter Kenny Rogers experienced a brief career resurrection courtesy of a spitball. Cardinals manager Tony La Russa got wind of the cheating in Game 2, but instead of blowing the whistle, he spoke a quiet word to the crew chief, who relayed the news to Jim Leyland and Rogers, who presumably stopped throwing spitballs. The Cardinals won the Series in five games.

But as much as Rogers must have appreciated La Russa’s delicate approach, does anybody owe that kind of mercy to a cheater? Billy Martin certainly didn’t think so when he called out George Brett for using too much pine tar on his bat in 1983. And unlike Peralta, Brett’s rule-breaking was a matter of ignorance, rather than an attempt to gain an advantage (hence the success of the Royals’ ensuing protest).

There are baseball people, like Maddon, who believe that Johnson betrayed an unwritten rule by outing Peralta. And it stands to reason that there were at least a few members on the Nationals who don’t have fond memories of the Rays reliever, or it might have been handled differently. But the inescapable fact is that Peralta was cheating, and Maddon’s puzzling outrage is totally unjustified. Hitting a baseball is a difficult act, and when a pitcher gives himself an illegal advantage with pine tar or spit or Vaseline or any other substance, righteous indignation belongs to the batter. Peralta and Maddon have nobody to blame but themselves, and the only emotion they should have the audacity to express is shame.