The Year the Laundry Won: Why Baseball’s High-Turnover Teams Haven’t Been Bad This Season 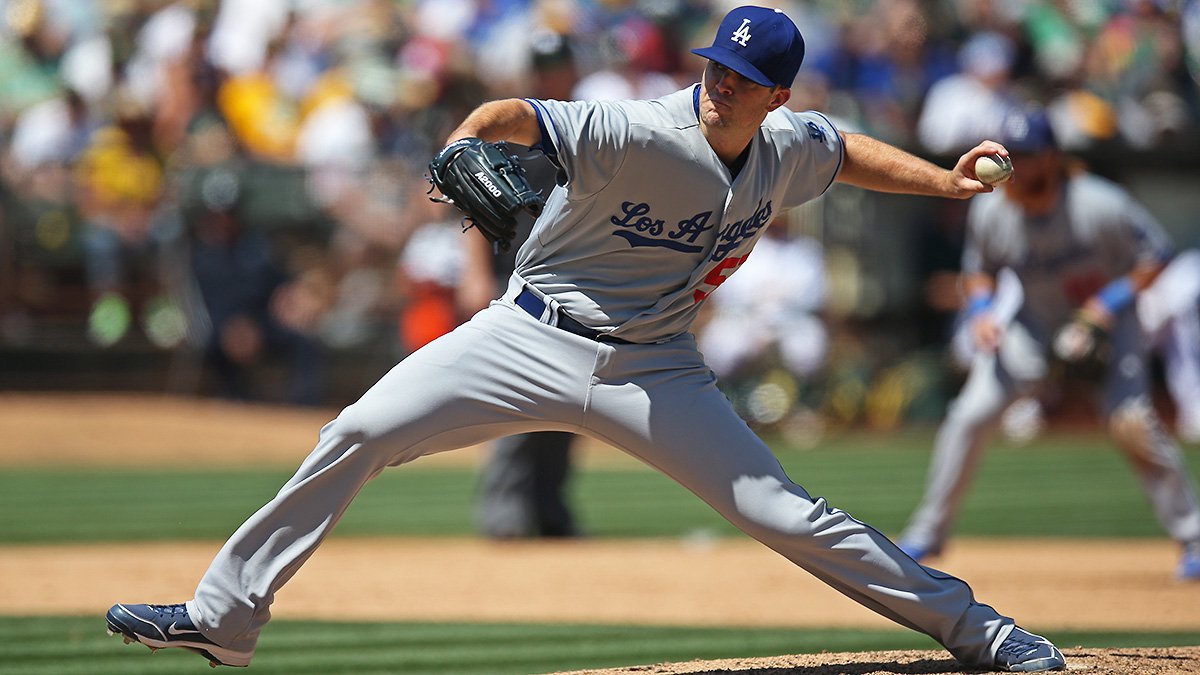 Dig deep enough into the numbers and narratives, and you can find something distinctive about every baseball season. In some cases, the unique marker is a perfect pennant race or a statistical competition between players. In others, it’s a change to the sport’s structure: expansion, realignment, a new playoff format. In still others, it’s a shift in the offensive environment, or the arrival of an analysis-altering data source, or a sign that some new tactic is taking over.

We haven’t had to dust long to get 2015’s fingerprints on file. We might remember this as the year when teams promoted top prospects at an extraordinary rate, and when those prospects (and other young players) produced right away. Or the year when projection systems correctly predicted great parity — the five first-place teams outside the AL Central lead their closest competitors by a combined 14 games in the loss column, less than Kansas City’s 15-game loss-column lead over Minnesota — but were way off on which teams would win. Or the year of unprecedented activity at the trading deadline, or pitchers batting eighth, or Statcast. Or, if you prefer to classify seasons by their signature teams, the year of the Astros’ and Cubs’ rapid turnarounds, the Cardinals’ cluster luck, or the likely end to Toronto’s postseason drought.

For the first 40 years of major league history, player counts increased in conjunction with roster sizes, which didn’t permit 25 active players until 1914. Since then, the roster size has been stable, but player usage has continued to climb, reaching a peak average of 47.8 players per team last season — almost 50 percent higher than the average in the 25-man roster’s rookie season. In the past two decades, the growth has been driven by pitchers, who recently began to outnumber batters for the first time thanks to teams’ eagerness to expand their bullpens and use their pitchers for shorter and shorter outings. 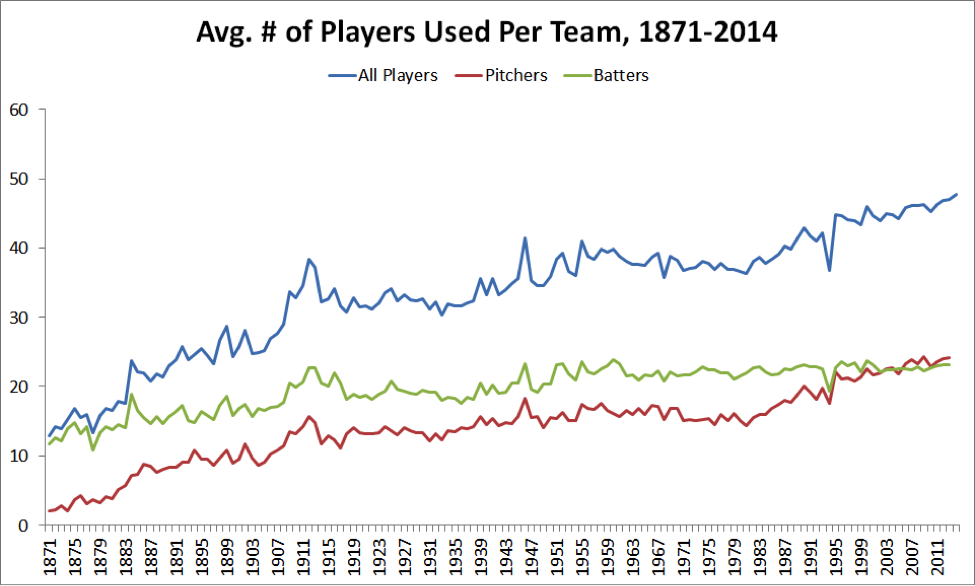 Despite these sweeping changes in roster construction, one rule of thumb has held true through the decades: The more players a team uses, the worse it tends to be. It’s easy to see why there would be weakness in numbers, because teams don’t tamper with their active rosters unless an upgrade is in order. Call it Newton’s First Law of Roster Construction: A roster at rest remains at rest unless acted on by injury or underperformance. And the more injured and underperforming players a team has to replace, the worse its outlook. 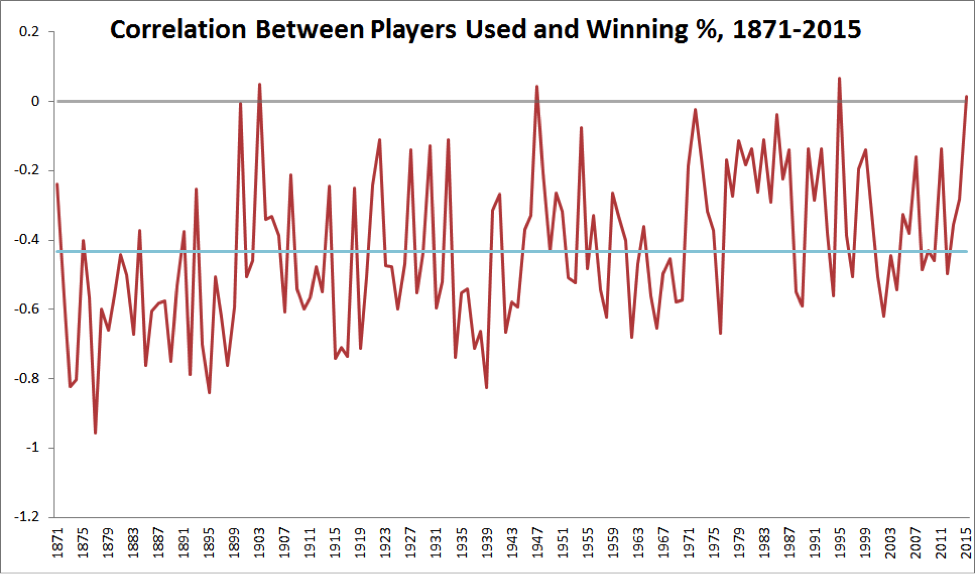 It’s clear that the trend was strongest during the game’s pre-MLB primordial age, when a good team could get through the short season with two underhand-throwing pitchers. But it has held up to a lesser extent in recent years: From 1996 (the first post-strike season) through 2014, the correlation was minus-0.38. Compare that to the figure for 2015: 0.01, no correlation.

As the graph reveals, only four years in major league history have seen a correlation poke above zero: 1903, 1947, 1995, and 2015. This would be the first non-strike season with a correlation above zero (however slightly) since the year Jackie Robinson broke the color barrier.

Of course, a quarter of the regular season remains, and September call-ups are still to come, so there’s time for the numbers to start looking more like the usual year’s. But to this point in 2015, we can say that knowing a team’s player count would give us no indication of its level of success.

Last year, when the correlation was a more reasonable-looking minus-0.28, the Rangers typified the trend: Swamped by a wave of injuries, they used 64 players, six more than the team with the second-most turnover. Most of the players they added were worse than the ones they lost, and their results declined accordingly. They finished 67-95.

This year, the Rangers are still coping with the fallout from those and other injuries, once again leading the majors in days spent on the disabled list, with 1,514 through Tuesday. Thanks in large part to those lost personnel, they’ve used 53 players, the second most in the majors. But they’re also three games over .500, and they’re in the running for the AL’s second wild card. Meanwhile, the third- and fourth-ranked teams in total players used, the Dodgers and Yankees, are in first place in their respective divisions. The Dodgers have suffered the fourth-most DL days, but the Yankees — shockingly, given their aged core and recent fragility — are only 14th in that respect. That’s another way to express the strangeness of what we’re seeing this season: The four teams at the top of the DL leaderboard (Rangers, Mets, Rays, and Dodgers) are all in contention, while the teams at the bottom (Brewers, White Sox, and Mariners) are also-rans.

Historically speaking, this doesn’t make sense: Injury-sabotaged teams with high roster turnover should be bad, and teams with healthy, stable rosters should have a leg up. If this is a fluke, we can just enjoy it for what it is, like we’ve enjoyed the prospect promotions and the unpredictable standings this season (unless you’re a fan of one of the preseason favorites that fell on its face). But we can also ask whether there’s any hint of order amid the chaos — some new trend in roster usage that would help explain what we’re seeing.

Baseball teams tend to copy what works. If there’s a model franchise whose approach to the roster is being aped by everyone else, it would probably be the underdog 2012 Orioles, who pulled off an upset playoff appearance despite — or maybe aided by — their fluid treatment of their roster. That season, the top four teams in players used — the Red Sox, Blue Jays, Cubs, and Padres — finished with a combined .431 winning percentage. The Orioles, who used the fifth-most players in the majors (52), went 93-69. As Grantland contributor Adam Sobsey wrote at the time for Baseball Prospectus, Baltimore seemed to have wrung every run out of its talent base in part by “treating the roster not as a fundamentally stable entity accommodating only minor, usually temporary additions and subtractions as the year goes on — mostly to account for injuries — but as a completely negotiable and inconstant chimera that can and should be reconfigured on a twice-daily basis.” If the bullpen was running on fumes, the Orioles would call up a Triple-A replacement immediately to ensure that the team had a fresh arm. And if GM Dan Duquette, who’s well known for plucking successful players out of obscurity, saw someone he liked on the scrap pile, he’d sign him in an instant. Their transaction record looked like the Perseids: a flurry of activity producing eye-catching unknowns from out of the void, many of which burned bright but didn’t last long.

Sobsey noted that those Orioles transactions stood out in one category: contracts selected, the term applied when a team adds a player to its active roster who was not already on the 40-man roster. When he was writing in early September, the O’s led the pack with 17 contracts selected. They finished with an MLB-high 25. In retrospect, though, the O’s weren’t the only team employing this tactic more often in 2012. Impelled, perhaps, by the urgency of the first season of the 10-team playoff format, teams reached outside their 40-man rosters for reinforcements far more than they had in the preceding few seasons, and they’ve continued to do so since (albeit not quite as often this year).

The best case for this year’s lack of correlation being driven by unorthodox roster moves rests on the Tampa Bay Rays. The 2012 Rays used only 43 players, which made them one of the majors’ most immutable teams. They’re up to 49 so far in 2015. As many others have noted, Tampa Bay seems determined to limit its starters’ exposure to the penalty that pitchers accrue when they work a third time through the order, which has meant transferring more of the staff’s workload to relievers. Only the Diamondbacks (whose starters have been far less effective) have asked their bullpen for more innings than the Rays. Yet the Rays, who don’t have any representatives in the relief-innings top 25, have also avoided overworking any one reliever. They’ve done this, in effect, by streaming relievers at the back of the pen, periodically dipping into the minors to distribute big league innings. Sobsey, who spent several years covering the Durham Bulls, Tampa Bay’s Triple-A affiliate, says he gets the sense that the Rays have become “more amenable to reconstructing the roster week by week or even series by series, depending on their needs at any given point.” Rays president of baseball operations Matt Silverman declined an interview request about the team’s roster strategy, as did Dodgers GM Farhan Zaidi, whose team has had even more turnover than the Rays (and just added Chase Utley to complete its collection of former Phillies middle infielders).

On the other hand, it’s hard to untangle intention from circumstance. Would the Rays have done any of this if they’d had Alex Cobb, Drew Smyly, and Matt Moore healthy and effective in the rotation? Or if Ernesto Frieri and Grant Balfour had been a better late-inning combo? Or if many of their bullpen pieces — Jake McGee, Jeff Beliveau, Kirby Yates, C.J. Riefenhauser, Enny Romero — hadn’t also missed time? Would the Dodgers have gone through anything close to 31 pitchers, more than any other team but the rebuilding Braves, if they’d had a healthier staff?

We don’t know, and for now, they’re not saying. But even if the frantic dog-paddling that contenders have done to stay afloat in 2015 is a one-year blip, it’s made a strange and exciting season more memorable. We could call this the year of prospects and young players, of deadline acquisitions, and of no correlation between record and roster turnover. But maybe it’s more accurate to call it the year when the laundry won.

Thanks to the Elias Sports Bureau and Rob McQuown of Baseball Prospectus for research assistance.

Hyperbole in Spandex: Your Primer for Sunday’s Blown-Out ‘SummerSlam’