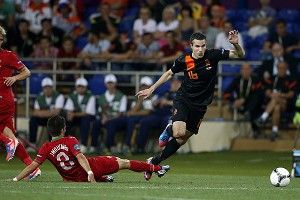 Happy Euros one and all! In this week’s pod, the Men in Blazers gather to cover the conclusion of the tournament’s group stage before the quarterfinals get under way Thursday. And what a fabulous tournament it’s been. That is, of course, unless you happen to be SNL’s Seth Meyers and a supporter of the once-mighty Netherlands.

In this week’s pod, Seth joins Michael and Roger to recount what exactly went wrong for Robin van Persie & Co. It’s a painful experience made all the better by a certain Amsterdam ale. Now, having been a longtime supporter of the Boston Red Sox, Seth pledges his allegiance to another long-suffering cause — England. Though the squad must still go through Italy and potentially Germany to reach the final, the Blazered Men are ever buoyant. Should the Three Lions prevail, could an SNL hosting gig be in the works for manager Roy Hodgson? Seth neither confirms nor denies the possibility.