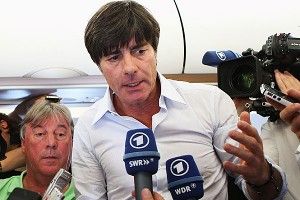 On Sunday in Germany, Joachim Löw was everywhere all at once. In the Frankfurt airport, his frown was plastered across nearly every paper on the stand. The Frankfurter Allgemeine, a burly broadsheet not unlike the the Wall Street Journal in this country, featured an illustration of his face on its front page, crumpled and then flattened, dappled with distress. “Celebrated too early,” its caption began. “A week ago we were enamored with [Löw]. He was a star. Since last Thursday’s 2-1 result against Italy we now know that he didn’t get everything right, but rather, he actually got a whole lot wrong …. Grrrr.”

In Hannover, a mustachioed man with a bookshelf of a belly stepped into the dining car of a train headed for Berlin with the Bild, perhaps Germany’s most infamous tabloid, folded under his arm. “Another Final Without Us,” the first half of its headline read. “Can one still believe in Jögi?” He pored over a post-match breakdown the entire way to the capital city, hunched over and frozen, breaking away only for another wheat beer. He had four in just over an hour.

Pulling away from the train station in Berlin, you could hear more on the radio. Löw hadn’t just tampered unnecessarily with the lineup at yet another critical juncture like he had with Greece in the quarterfinal a week earlier. Like a dope, he had dismissed the flanks to strengthen the central midfield as Italy’s Cesare Prandelli had hoped he would. The list of tactical miscalculations was as long as his arrogance was immense. He was soft. He was weak. His thinking was better suited to academics than to soccer.

Even as blowhards and former German stars like Oliver Kahn and Jens Lehmann took aim at the lack of leadership on the field, questioning the captaincies of Philipp Lahm and injured backup Bastian Schweinsteiger (representatives of what Munich’s Suddeutsche Zeitung defended and deemed “Generation Lahmsteiger” this past weekend), no one was shouldering the responsibility quite like Löw.

“Look at our miserable ‘Fan Mile,'” my ride said as we drove past the entrance to Berlin’s largest public viewing area, the one that stretches outward from the Brandenburg Gate and that television networks usually cut to when there’s reason to celebrate. From the outside, it looked as though they’d already started to tear it down.

And in Walhalla, an aging corner bar and restaurant just a few minutes northwest of there, a table was way too easy to come by for Sunday night’s final. Two dozen twentysomethings were lounging quietly in front of the projection screen, the room’s hum not unlike that of a classroom during test time. When a replay of Italian striker Mario Balotelli’s second goal flashed across the wall, two older guys in the back groaned. “How can they show that again,” Willy, a wily, 69-year-old retiree moaned as the room glared blankly at Balotelli’s shirtless torso. “It’s too soon.”

Hartmuth, an apple-cheeked chemistry teacher one year Willy’s junior, felt as though the Italians had deservedly won on Thursday, had them pegged to beat Spain as well. “They played with full hearts,” he said of the Azzurri, a team Germany has never beaten in competitive play. “When they sing their national anthem before the match, they sing with full power. The Germans,” he gasped as he slumped over and lost shape, “looked as if they were falling asleep.”

The pre-match scene in Kiev, shown on the television, wasn’t all that different. From a beach studio on the island of Usedom, Kahn, the former national team keeper, looked like he was passing stones as he spoke in front of an audience in similar pain. When it came time to sing anthems, Harmuth pointed to the screen: Buffon was belting it out, Sergio Ramos was ice. He was, despite what his heart wanted, totally convinced that Italy would prevail again. But once the scoring opened with that outrageous goal off David Silva’s head, his face lifted. The room came to life. At halftime, that same studio audience was a sea of sour grapes with grins. Elsewhere, 100,000 spectators had crammed into the “Fan Mile” one last time, albeit most of them visiting Spaniards. But in 90 minutes, the Spanish would both avenge them and swiftly do away with the idea that even the Germans, co-favorites, could have shared a class with them that night. What strange relief.

With minutes left on the clock, I asked the two — Willy and Harmuth — if they thought Germany would have been able to win against this Spanish team. Their heads shook immediately and rapidly. “It is impossible to say,” Willy said, his finger raised, “how players will react to another on any given night. But this is perfection. This was perhaps the best game I have ever seen played.” For a moment, it was as if Thursday had never happened at all.