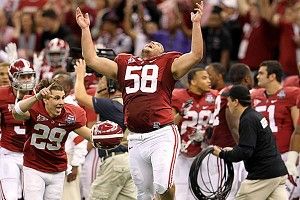 Here’s the funny thing about college football’s new playoff: It was designed by men who, until about five minutes ago, hated playoffs. It’s like Bart Giamatti writing the text for Pete Rose’s Hall of Fame plaque. Or Jonathan Vilma nominating Roger Goodell for the Nobel Peace Prize. But if, like me, you’re suspicious of playoffs, you can see a certain genius at work.

The first thing the playoff-hating playoff architects wanted to do was keep the thing small. So they devised a four-team format. “A four-team playoff doesn’t go too far; it goes just the right amount,” Virginia Tech’s president explained, sounding like he was reading The Three Bears.

In the real world, four teams was never a consensus position. President Barack Obama is on record wanting an eight-team playoff. Bloggers have constructed 16-team playoffs. But the playoff architects added the minimum number of teams possible to call it a “playoff.”

If the playoff was going to start small, the playoff architects were determined to keep it that way. A couple years ago, BCS advocate Ari Fleischer pointed out that nearly every playoff in sports history — pro or college — has ballooned in size. For example, Major League Baseball’s playoffs have expanded by 500 percent since 1968, even though the league has only grown by 50 percent. The NFL playoffs have grown from eight teams in 1970 to 10 teams in 1978 to 12 teams in 1990. NCAA’s Football Championship Subdivision playoff — which was cited as a model for its big brother for years — grew from four teams to 20 teams.

Playoff architects feared they’d be asked to expand the system every year. So they locked in the four-team playoff for a full decade. Counting the final two seasons of the BCS, that means the playoffs can’t expand until 2025. By then, at least five University of Hawaii quarterbacks will have broken the NCAA’s career passing record.

Finally, the playoff architects wanted to keep some remnant of the old bowl system intact. BCS foes argued that the bowls’ endemic corruption made this impossible. But as Mark Schlabach reports, the semi-final rotation will include the Rose Bowl, the Champions Bowl (a new venture between the SEC and Big 12), and may even include the hated Fiesta Bowl. So the bowls are still there.

There’s a word for the new playoff: passive-aggressive. Or grudging. Or brillaint. Take your pick. I’ve got to get Vilma on the Nobel application.

About Last Night: Cleaning Out the Birdcage