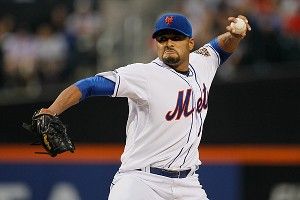 Number of Seattle Mariners who combined to pitch a no-hitter June 8 against the Los Angeles Dodgers: 6.

Number of no-hitters pitched this year so far at Seattle’s Safeco Field: 2.

Number of times a New York Met had pitched a no-hitter in the team’s half-century history before Johan Santana did it in early June: 0.

Number of times an 8-seed had won the Stanley Cup before the Los Angeles Kings did this year: 0.

Number of people who watched the Miami Heat beat the Oklahoma City Thunder in Game 5 of the NBA Finals: 18.5 million.

The record price CBS is asking for a 30-second ad during next year’s Super Bowl: $3.8 million.

Percentage of the slots that are already sold: 80.

Amount of money the Saints’ Jonathan Vilma allegedly offered anyone who knocked the Arizona Cardinals’ Kurt Warner out of their 2010 playoff game: $10,000.

Estimated amount taxpayers paid for the eight-week Roger Clemens trial at the end of which he was acquitted: $2 million to $3 million.

Value of the nearly 10 million counterfeit items with logos of different sports leagues, teams, and schools seized since 1993 thanks to the Coalition to Advance the Protection of Sports Logos: $369 million.

Number of games Tampa Bay Rays reliever Joel Peralta was suspended for by Major League Baseball for having too much pine tar on his glove: 8.

Number of pages of the document in which Lance Armstrong’s attorneys argue they still haven’t been allowed to see the U.S. Anti-Doping Agency’s evidence against him: 11.

Number of pages in Wimbledon’s manual for grass maintenance: 33.

Percentage of women in the Wimbledon women’s singles draw this year that have a last name that ends in “-ova”: 19.5.

What former Chelsea Striker Didier Drogba will make per week playing for a team in Shanghai owned by an online gaming tycoon: $300,000.

The new price of three years of British broadcast rights for the English Premier League: $4.7 billion.

The total budget for the London Olympic Games: $13 billion.

Number of participants in this year’s U.S. Olympic swimming trials: more than 1,800.

Approximate number of those swimmers who didn’t make it to the Olympics for every one who did: 39.

Number of women in the 100-meter dash at the U.S. Olympic track and field trials set to make it to the Olympics: 3.

The time in seconds run by Allyson Felix to finish third: 11.068.

The time in seconds run by Jeneba Tarmoh to also finish third: 11.068.

Australia’s medals per capita over the last three Summer Olympics: 397,858.

The United States’ medals per capita over the last three Summer Olympics: 2,845,174.

The price of a table made from a fallen maple tree at the Splendid Splinters baseball camp that once belonged to Ted Williams: $6,700.

The price of four days of Dwyane Wade’s fantasy camp, set for South Beach in August, open to adults 35 and older: $12,500.