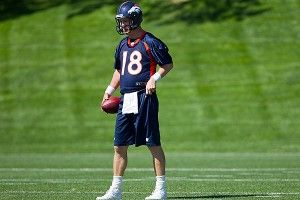 Number of soccer teams among the top 10 highest-paying sports teams in the world: 7.

Number of consecutive wins by the San Antonio Spurs until their May 31 loss at Oklahoma City: 20.

Percentage of Hispanics in the NBA’s regular-season viewership: 12.

Percentage by which that’s gone up over the last year: 20.

What Hideki Matsui hit in 13 games with the Triple-A Durham Bulls: .170.

Number of Japanese media members at Tropicana Field for his debut May 29 with the Tampa Bay Rays: Nearly 30.

Number of wins Japanese pitcher Yu Darvish had in his first 10 starts, more than any other pitcher in Rangers history: 7.

Number of home runs the Rangers’ Josh Hamilton hit May 8 against the Orioles: 4.

Amount of debt Harris County, Texas, still owes on the Astrodome, which was closed and declared unsafe in 2008: $30 million.

Estimated amount it would cost just to demolish the facility: $128 million.

Projected cost of the Vikings’ new stadium in Minneapolis: $975 million.

Portion of that price tag the Vikings will pay: $477 million.

Amount the University of Texas made on athletics last year: $150 million.

National rank of those two figures: 1.

Number of Division I public colleges and universities in America that spent more than $100 million on athletics last year: 10.

Aggregate amount by which the athletics spending at America’s 227 Division I public colleges and universities went up last year: $267 million.

What each student at Rutgers ends up having to pay per year on average to support sports: $1,000.

The number of full professors that could be hired with that pool of money: 132.

What NBC got for 30-second ads during this year’s Super Bowl: $3.5 million.

What CBS is already getting for the same for next year’s Super Bowl: $4 million.

Age of former NFL star Junior Seau when he committed suicide May 2 at his California home: 43.

Number of seasons he played in professional football: 20.

Number of players from the 1994 San Diego Chargers Super Bowl team who are now dead: 8.

If It's Not Broke, Why Fix It? OKC's New Approach on Offense