July in Sports: By the Numbers 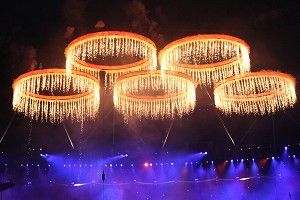 The current estimate by the British government: $14.6 billion.

The estimate by an independent study: $37 billion.

Time in hours it took a bus of arriving American athletes to go 23 miles from the airport to the Olympic village after the drivers got lost: 4.

The first year the Opening Ceremony was televised: 1936.

Number of hours of coverage NBC showed in 1996 for the Olympics in Atlanta: 170.

Number of hours of coverage NBC is showing in these Olympics: 5,535.

The amount spent on security in 1972 for the Olympics in Munich: $2 million.

The number of British military personnel involved in some security capacity at the London Olympics: 18,200.

Number of British military personnel used to fill empty seats at North Greenwich Arena this past Sunday: more than 50.

Number of unsold tickets to Olympic events 10 days before the Games: 700,000.

Cost of a ticket to opening sessions for table tennis and BMX biking finals: $31.

Percentage by which average game attendance in the NFL is down since 2007: 4.5.

Percentage of people who say they would be more likely to buy a certain brand because it’s mentioned by an athlete on a social media site: 53.

Followers on Twitter during Euro2012 for @EinAugenschmaus, a German deaf woman who tweeted the on-field discussions of Germany’s players and coaches, which she lip-read: 24,084.

Number of mentions of the Opening Ceremony made on Twitter last Friday, more tweets than in the entire Beijing Olympics in 2008: 9.66 million.

Number of athletes at the Olympics banned from the Games by the fourth day of competition for racist tweets: 2.

The University of Florida’s projected athletic budget for the upcoming academic year: $97.5 million.

What University of Florida coaches get if their teams have an 85 percent graduation rate: $4,000.

The amount of the fine the NCAA ordered Penn State to pay because of the Jerry Sandusky scandal: $60 million.

The amount of donations Penn State received over the last fiscal year, the second-highest amount ever collected by the school: $208.7 million.

The projected revenue of the fantasy sports industry by 2017: $1.7 billion.

The average number of people who watched NBC in prime time the first three days of the Games in Beijing: 30.6 million.

The first three days of the Games in London: 35.8 million.

Number of the more than 200 million Americans who watched at least parts of the Beijing Olympics who had never watched an NFL game: 69 million.

Amount in prize money and bonuses 17-year-old gold-medal-winning swimmer Missy Franklin of Colorado already has left on the table to maintain her “amateur” status so she can swim in college: $115,000.

Estimated number of “brand police” whose job is to cover logos and monitor social media during the Olympics in London: 250.

Record number of free condoms made available at the Olympic village: 150,000.