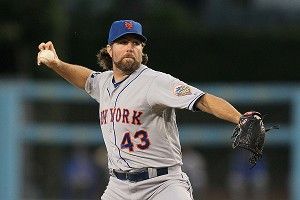 After a brief hiccup against the Yankees last Sunday, R.A. Dickey was back to his usual world-beating self on Friday, striking out 10 Dodgers in a 9-0 Mets win. He’s 12-1 with a 2.15 ERA on the year, and the prohibitive favorite to start for the National League at the All-Star Game next Tuesday. If you’ve missed out on the Dickey hype and want to read more, check out Jonah Keri’s piece on his unlikely late-career rise here. For now, all you have to know is that he’s the only knuckleball pitcher in the majors.

The knuckler is an odd and beautiful and chaotic pitch, and since Dickey throws it 86.1 percent of the time, it occurred to me that he should probably take a page from Darryl Dawkins’s book and name each variation.

Dawkins was the electric NBA player who gave his iconic dunks monikers such as: In Your Face Disgrace, The Go-rilla, Earthquaker Shaker, Candyslam, Dunk You Very Much, Look Out Below, Yo Mama, Turbo Sexophonic Delight, Rim Wrecker, Greyhound Bus (went coast-to-coast), Cover Your Head, and Spine Chiller Supreme.

Why not Dickey? A good knuckleball is just as devastating as a dunk, and since R.A. is mild-mannered on the mound, his pitches could use some extra personality. But the names need to be knuckle-specific, full of the unpredictability, boldness, and melancholy inherent to the pitch.

This video from a May 22 win against the Pirates showcases 11 of Dickey’s knuckleballs, each one a strikeout pitch. You can follow along with the timestamps below as I suggest some names. Feel free to leave your own ideas in the comments.

Uncoordinated Right-Wing Militia Man at the Shooting Range OR Intense, Zealous Left-Wing Eco-Terrorist Who Can’t Figure Out How To Chain Himself To A Tree. (Depending on your politics.)