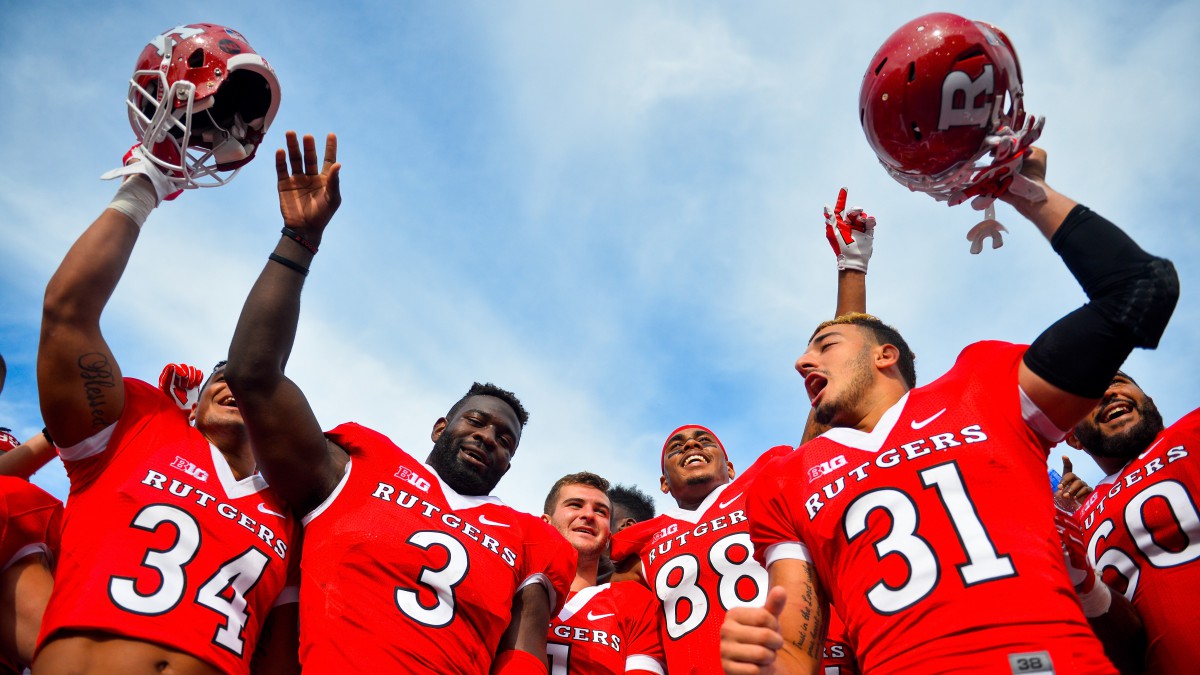 Kevin, Matt, and Mark came to Rutgers to see a show. Not one of them has the slightest rooting interest in the Scarlet Knights, or in the visiting Kansas Jayhawks. The trio are Big Ten adherents, alumni of Maryland, Wisconsin, and Michigan, respectively — but it wasn’t conference loyalty luring them to Piscataway, New Jersey. No, this was a rubbernecking excursion, and these guys were here to warm their hands by the biggest tire fire college football had on offer in Week 4.

This was a fair expectation on their part. Rutgers, which played its first football game in 1869, and which very much enjoys reminding anyone who will listen that its school is the Birthplace of College Football, is currently experiencing several decades’ worth of crisis all at once. Things started to go sideways with the dismissal of six players, five prior to the season opener and another days later, following arrests on robbery and assault charges in connection with a series of home invasions. Then there was the standout receiver, Leonte Carroo, suspended after being collared for simple assault in a domestic violence case a week later. Shortly before kickoff Saturday, a release circulated saying RU’s star defensive tackle, Darius Hamilton, a senior captain who won last season’s team defensive MVP award and earned all-conference honors, would miss the rest of the season due to injury.

And there is, of course, the small matter of Rutgers’ head coach, Kyle Flood, who is serving a suspension of his own, one following a lengthy investigation that revealed his bewilderingly ill-conceived and flagrant attempts to circumvent university policy in order to maintain academic eligibility for a struggling player, a student who would turn out later to be among those initial half-dozen kicked off the team anyway.

Throw in Kansas as an opponent, a team that opened the season by losing to FCS powerhouse South Dakota State and got subsequently trounced by Memphis. Then compound that with the fact that Rutgers was coming off a 28-3 thrashing at Penn State and a Week 2 loss to Washington State,1 and the lure of this particular contest for unaffiliated gawkers becomes, if not advisable, at least understandable. “I was looking for pants-on-head silliness,” Kevin said afterward, “and a complete lack of footballing competence.”

Alas, even as the sporting event equivalent of a Roger Corman movie, Rutgers-Kansas disappointed — not well played by any stretch of the imagination, but not remotely disastrous enough to fuel an entire afternoon of Bronx cheering. It also happened to just be a surpassingly beautiful day for football, once the clouds burned away after about a quarter of the game, and it was homecoming weekend, filling the surrounding grounds with even more pageantry and meat smoke than usual. The Knights rushed for over 300 yards and won 27-14. The Jayhawks could at least console themselves with having lost to a Power 5 team this time, and with a respectable-looking score. “That was entirely more satisfactory than I anticipated,” said Matt after the game, “which is to say I was entirely disappointed.”

The good news for Rutgers, if you’ve got a scorecard going at home, is that the Knights sent their haters home dissatisfied. The bad news is that real disaster could be just over the horizon. The team has a 2-2 record at the end of September, with wins over FCS program Norfolk State and Kansas, maybe the worst team in the Power 5, one conference loss already to Penn State, and another to a Wazzu team that seems destined to set up a really nice basement apartment in the Pac-12 North. The worse news is that conference play’s about to begin in earnest, and that RU’s next five opponents are no. 2 Michigan State, 4-0 Indiana, no. 1 Ohio State, no. 19 Wisconsin, and no. 22 Michigan. Right now, if there’s solace to be found in their immediate future, it’s that they get the Spartans and Buckeyes at home, and that after the Michigan State contest, they get back the coach who’s not only dumb enough to put evidence of his attempts to influence an instructor to change a player’s grade in writing, he’s dumb enough to use his non-university email account for it, hoping to avoid scrutiny, and then point out that that’s exactly what he’s doing.

At the rough midpoint of Flood’s suspension, his university-administered sentence itself still makes no sense. Whether administrators are truly this invested in Flood’s body of work or just hoping for this whole affair to be ignored by the time his suspension lifts is unclear. But the Big Ten schedule the team has been assigned will make scandal-obfuscating victories very difficult to come by, and failure to hit .500 in the win-loss column would mean Rutgers finishing outside of the postseason for just the second time in the past decade.

Indeed, it’s difficult to imagine any number of victories for any team that could obscure wrongdoing of this magnitude. At best, this situation is only going to metastasize from here. Think about it for a second: What would triumph on the football field even look like in December? Making a bowl after this tumultuous first month of the season could be spun into a turnaround narrative for the school if there were an interim coach at the head of the team, but can you imagine watching Flood, in a postseason press conference, talk about all the “adversity” he went through this year, and knowing what he means by that? 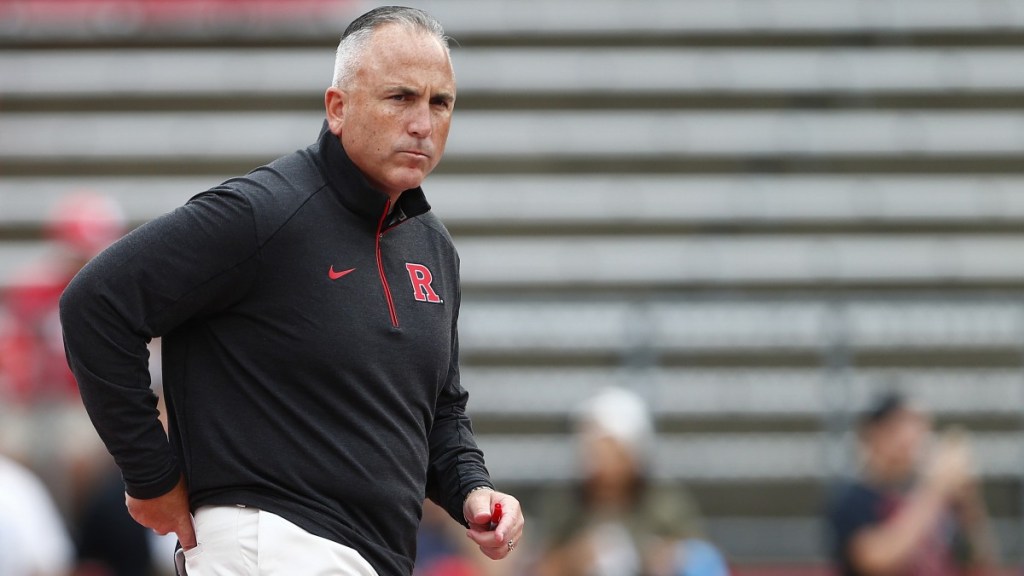 And where the events of late summer and early autumn will be least forgotten is where they should matter the most — within the university community itself. It’s one thing to frustrate paying audience members who show solely to giggle at a catastrophe, but what of the team’s actual fans? Even dedicated Knights followers and full-throated supporters of Flood were appalled when the report was released and the subsequent punishments were announced; after a full Saturday of wandering the grounds around the stadium, the most glowing endorsements of the head coach I could find could be characterized as “aggrieved bemusement.”

One longtime fan, Scott, is a New Jersey native who attended a D-III university but follows the Knights; he’s had season tickets for the better part of a decade now. The current cascade of indignities hasn’t lessened his desire to show up on Saturdays, but that patience comes with something of an expiration date. “I just figure at the end of this year they will clean house and start over,” he said Sunday. “If they don’t, then my stance will probably change.”

Priya, a 2009 RU graduate in her third year as a season-ticket holder, takes a more coldly pragmatic view of Flood’s tenure. “It’s the abject stupidity that he displayed in going about it that really irks me,” she said. “And that alone is enough for me to want him gone.”

Not only did there appear to be more than enough in the report to cut Flood loose for cause — who could’ve credibly pushed back at his dismissal? — there also appears to be plenty of available cover from the fallout, thanks to recent events in conference realignment. To level up into top-tier competition like this requires an adjustment in win-loss expectations in the best of situations. With this brutal a conference schedule, bowl eligibility was already no sure thing for Rutgers, so it’s not like anticipation within the surrounding community would take some huge hit with the Knights playing out the season under an interim skipper. Wouldn’t it make so much more sense to bundle the difficulty externally inflicted by the league change with that internally inflicted by Flood, ride them both out together, and see how many fans might be willing to meet the team halfway?

Because that’s the other anecdotal commonality found in Piscataway on Saturday: Every fan I could find, without exception, was stoked to be cheering for a team in the Big Ten. “Losing to Ohio State and the like isn’t going to be fun,” said Scott, “but like any fan, I am trying to convince myself that they will grow and be competitive.”

“It’s been a huge plus,” said Priya of the move. “I’ll be stunned if anyone answers this differently. After all, it’s way easier to get pumped for a home game against Michigan than one against UConn.”

There’s little football coaches love more than hollering about capital-C Character, something Flood won’t ever be able to convincingly attempt again. It’s an utter mystery who, exactly, is being served by hanging on to Flood, apart from Flood himself. It’s not the fans, who pay with their ticket dollars. It’s not the players, who pay with their time and with their health, and will have had a quarter of their guaranteed game days disrupted by the time the season’s over. It’s certainly not Flood’s assistants, who have to keep recruiting prospects into this situation with straight faces, against both the actual truth of the matter and whatever exaggerations are being concocted by their rivals. And it’s most definitely not the faculty and teaching staff of Rutgers, whose jobs are hard and insecure enough without worrying about explicit or implicit threats from the athletic department.

All of these parties deserve a head coach who will advocate for them without willful disregard for entirely basic university boundaries. Rutgers as an institution isn’t out of time to start controlling what it can control, and counting on what’s already working in its favor to see it through two transitions at once. The Scarlet Knights will still have the weight of close to a century and a half of history behind them. They’ll still be a Big Ten team when they navigate out of this, in whatever fashion they do. Only they’ll have players, teachers, and fans who can don their colors on Saturdays secure in the knowledge that their university has acted in a manner consistent with a school that deserves to be in the Big Ten in the first place.