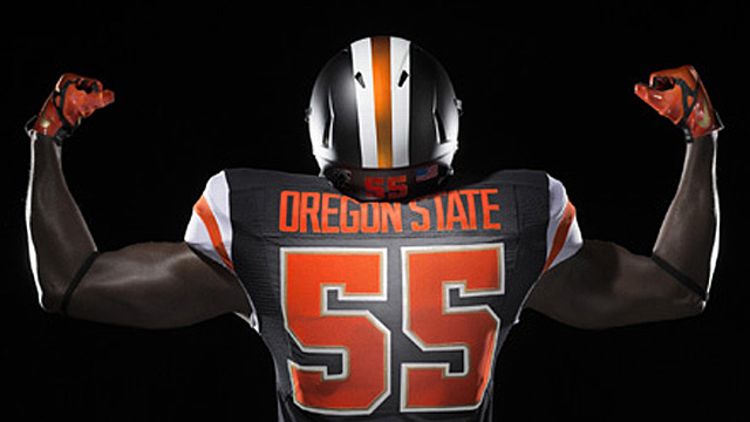 The football rivalry between Oregon and Oregon State, nicknamed the “Civil War,” has always had something of an image problem. Take the name, for starters: Though quite common, it’s not as deliciously ironic as the BYU-Utah “Holy War,” or as geographically appropriate as the West Virginia–Pittsburgh “Backyard Brawl.” But for decades, that name was all they had. Neither school was even remotely on the national radar before the mid-’90s. And if they were, it was because of their Disneyfied color schemes and innocuous mascots.

But now, the “Civil War” sounds entirely quaint seeing as how the Beavers have taken after the Ducks’ Decepticon rebranding and the two schools will appear to be reenacting Transformers 2: Revenge of the Fallen this December, right in time for Christmas. By this point, I don’t think I have to preface you on why it’s major news when Oregon State’s Nike-sponsored gear is dropping jaws. My lord, have you seen these new Oregon State unis? Being that Phil Knight is a UO alum, I’m unsure if OSU has much pull in Beaverton (oddly enough), but it appears as if the school took a gander at Nike’s Pro Combat line and said, “We’re trying to win football games, not look like we’re going to church.” Those Neopolitan face masks!

The lesson was important: The Beavers already had one of the most recognizable color schemes and logos in college football, but as coach Mike Riley tweeted, it’s all about luring 18-year-old kids who might base the next four years of their lives on the possibility of wearing socks that are inscribed with “hip hop hooray.” Oregon State can serve as an example for many other second bananas across the college football landscape that are seeking to gain ground on their more respected rivals through some kind of radical and ridiculous rebranding. Sure, it looks a little desperate and they might always be no. 2 compared to their wealthier, more successful elders, but there’s nothing wrong with being Solange these days. Here are some more glaring opportunities:

In-state rival: Penn State
Sartorial conundrum: Most people can agree that Penn State’s blue-and-white uniforms are the only thing worth keeping from the Joe Paterno era. On the other hand, the Panthers are the only team in their city forgoing a black-and-yellow color scheme, and is thus barred from co-opting the city’s biggest hit since Rusted Root called it a day. Moreover, most people can’t remember whether Pittsburgh will still get offended if you call it “Pitt.”

Solution: As rent-paying tenants of Heinz Field, Pittsburgh cuts a sweetheart deal with the landlord’s laundry service that allows them to play home games in Steelers uniforms, not only exciting recruits but also fooling Pittsburgh residents so gone off Iron City pounders that they’re not sure what day it is. As an added bonus, the player who scores the highest GPA gets to wear Troy Polamalu’s no. 43, and the guy who crushed the most whiskey during last week’s after-party gets to wear Ben Roethlisberger’s jersey.

In-state rival: Oklahoma State
Sartorial conundrum: Oklahoma has pretty much every conceivable advantage over the school in Stillwater, in terms of gridiron success, tradition, and national profile (you just can’t put a dollar sign on the sort of cachet that comes from Barry Switzer and Brian Bosworth continuing to be your most vociferous liaisons). However, the one thing it lacks is a billionaire alumnus like T. Boone Pickens, whose main interests appear to be funneling untold amounts of said billions into his school’s football program and sonning Drake on Twitter.

Solution: What Oklahoma needs is an absurdly rich man who maintains a phenomenal chip on his shoulder despite his success, a bizarre interest in fashion, and no real ties to any institution of higher learning. Seems a little too obvious to give everyone’s favorite college dropout an honorary degree, doesn’t it? Like Boz wouldn’t approve a Lanvin kilt.

In-state rival: Boise State
Sartorial conundrum: Idaho is, by an incredibly large margin, the second-best FBS program in its own state, which is about as bad as it sounds. Worse yet, it’s located in Moscow, Idaho, which is also about as bad as it sounds. And to top it off, everyone knows about the Broncos’ Smurf Turf, to the point where Andre 3000 found a way to rap about it in a song that’s mostly about strip clubs. Meanwhile, Idaho’s Kibbie Dome is the smallest stadium in FBS football and seriously looks like an empty Home Depot when you play NCAA Football 13.

Solution: Does Idaho not realize it’s letting the most badass nickname in college football go to waste? See, the classy thing is to stress how “Vandal” is a reference to the Germanic people who sacked Rome back in the fifth century, but in a strange way, Idaho can differentiate itself by employing its common meaning. Why not utilize the “broken windows” theory and intimidate the competition with urban blight? Turn the Kibbie Dome into a vandalized, post-apocalyptic Home Depot rather than an empty one: burn marks on the turf, half-peeled stickers on opposing benches, unidentifiable sulfurous smells wafting in from the unknown, muttering dudes in trench coats … the possibilities are endless.

In-state rival: Michigan
Sartorial conundrum: “Under the Lights” fiasco aside, Michigan’s uniforms remain one of the most recognizable in all of sports; strong enough to withstand dubious usage at the University of Delaware and on PBS’s Square One. Meanwhile, the Spartans’ schematic reminds one more of the Gap’s fall clothing line: It’s mostly the same thing year after year, but they’ve moved a stripe or two in ways you can’t quite spot immediately.

Solution: To counter Michigan’s Adidas sponsorship, Sparty gets on some old-school hip-hop battling and strikes up a stunning corporate partnership with Puma and Kangol for uniforms emphasizing suede finishes, fat laces, and furry helmet linings to withstand the bitter East Lansing winters.