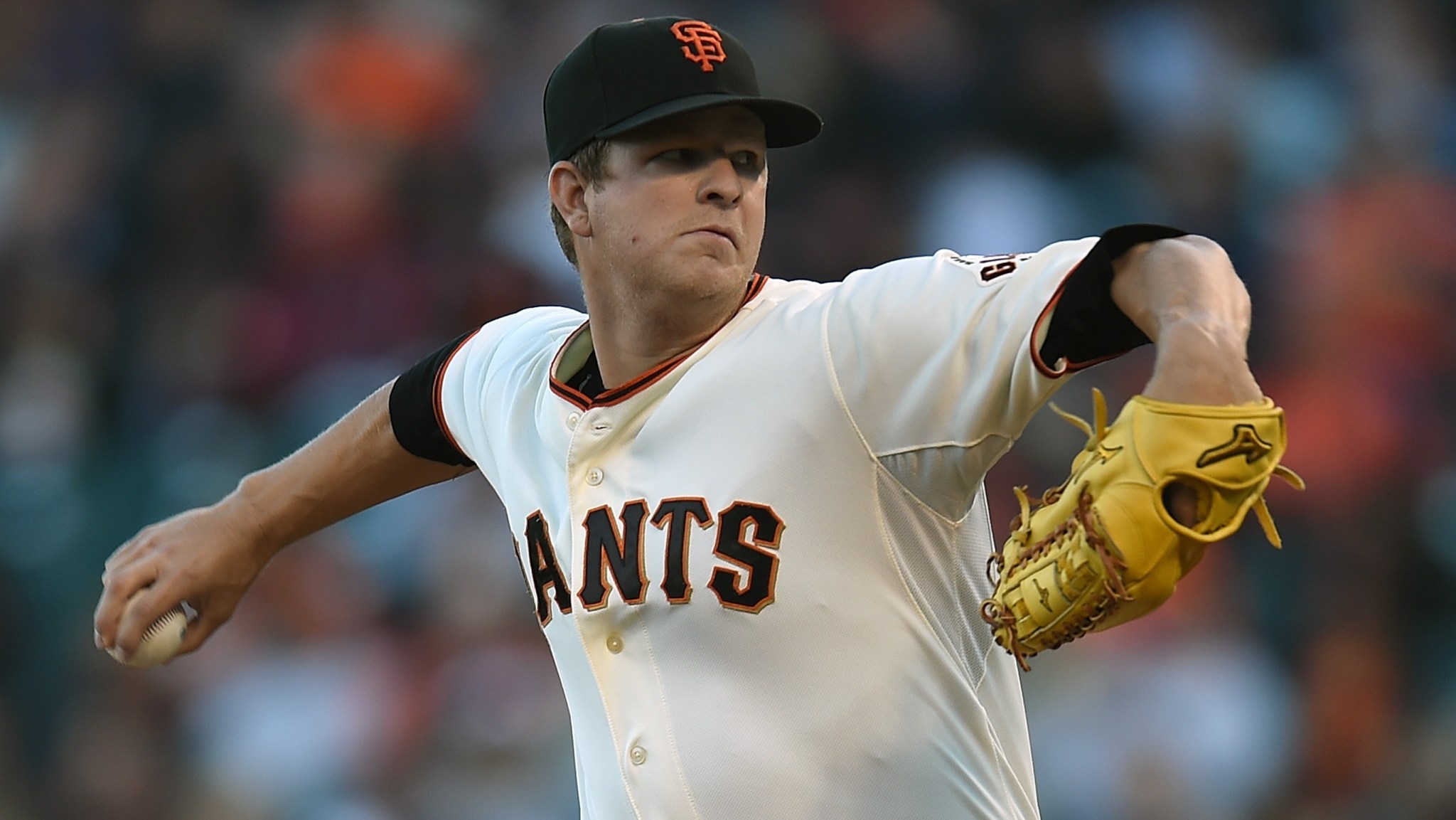 You’ve got fantasy baseball questions, the Roster Doctor’s got answers. In this edition of the mailbag, we tackle keeper-league concerns, when to sell high versus hold, what to do with Matt Cain, and much more.

Do you think now is a good time to sell high on Anthony Rendon, or do you think he will keep producing and people still don’t value him enough?
— Adam

Granting that I whiffed terribly on a couple of these picks, Rendon was one of the Doctor’s breakout picks this season, and most of what he’s done this year doesn’t look like a fluke. He posted a .408 on-base percentage in 326 minor league plate appearances, with 38 extra-base hits and nearly as many walks as strikeouts. Though his plate discipline hasn’t been quite that strong in the majors, he’s shown above-average contact skills, including the ninth-highest contact rate on pitches swung at in the strike zone since his 2013 debut.

The biggest source of potential regression is his home run pace. Rendon is tied for fifth in the majors with six home runs that just barely cleared the wall, according to ESPN’s Home Run Tracker. Only three third basemen have topped Rendon’s 12 total homers, so obviously that’s been a big source of his fantasy value, making any potential pullback in that skill a bit of a concern. Still, this largely depends on the point you made, namely Rendon’s level of esteem among your leaguemates. If they’re expecting him to maintain or even ramp up his current 25-homer pace, you might consider trading him for $1.10 on the dollar. Otherwise, you can hold with confidence. Even if Ryan Zimmerman moves back to third base when Bryce Harper returns, Danny Espinosa, and not Rendon, would be the odd man out.

Ehhh, what’s up doc?
I’m in a head-to-head points league and have fallen on hard luck with injuries, such as Jose Fernandez, Prince Fielder, and Nolan Arenado. It’s a two-keeper-per-year league, and I’ve fallen out of contention while having a ball picking up everybody and anybody on the waiver wire. My question is, should I try to sell older keeper assets such as Jose Bautista or Adrian Beltre to contenders for younger ones next year? Thanks!
— Max

With so few keepers allowed, there’s not much point in choosing someone like Oscar Taveras over someone like Bautista. Best to go with the guys who’ll help as soon as possible.

While [Yasiel] Puig has been a transcendent talent so far this season, how do we project what he will do the rest of the year? I have been offered Puig in a trade, but I am not sure how his power will project from this point forward. ZiPS has him at 22 home runs for the entire season and Steamer has him at 24. Is it really accurate to project Puig only having 11 to 13 more home runs this season?
— Robert, “Tim Raines Needs to be in the Hall of Fame” Fan Club Member

First of all, congrats on joining the world’s best fan club, Robert.

Projection systems are a fun tool if you want to use a snapshot in time for an educated guess. They can also do a good job of grounding us in realism, since they’ll bake worst-case scenarios, including potential injuries, into every call. But baseball players aren’t metronomes, and performance levels can and do vary from what those systems might tell us. At this point, we have enough data to suggest Puig might very well be one of the 10 best hitters in the game. With that said, Puig hasn’t necessarily been an elite home run hitter to this point; he impacts the game more with his on-base skills, bat control, gap power, and speed. This might be one of those times where the projection systems nail it, maybe even exactly.

I am sad to admit that I am currently second from the bottom of my league standings. It is not a dynasty league so I don’t have next year to worry about. What are some high-risk high-reward players I could target to try to turn things around? With such a deep hole to climb out it is not too early to adopt a high-risk strategy right?
— Andrew

Injured guys come to mind immediately. See if you can get Cliff Lee on a discount, that kind of thing. Also consider buying low on players who’ve been hugely disappointing, and hope that their luck turns. It’s probably too late to buy low on Carlos Santana, who was mired below the Mendoza Line for most of the season but has been on fire the past few weeks. So, consider going uglier. Mike Moustakas has also started to hit lately, but in a shallow league he might be sitting on the waiver wire, and in a deeper league his price tag will still be depressed. Jean Segura should give you steals, even if he doesn’t replicate his out-of-sight first-half numbers from last year. If you’re in a really deep league, Jedd Gyorko (23 homers in 2013, worst hitter in the majors this year) might be worth a shot. On the pitching side, scanning the leaderboard of pitchers with the biggest gaps between their ERA and fielding-independent stats is a decent starting point. On that list, Zack Wheeler and Ian Kennedy stick out as two I’d target.

I have Evan Longoria and Joey Votto in a league with OBP and XBH. Would you consider jumping ship on either of them? If so, what kind of hitter would you look for in return?
— Conrad

I’m not as much of a “never sell low” zealot as some other fantasy players, because sometimes a guy’s just done, and cutting bait is the best course of action. But Votto and Longoria are now both healthy, and Longoria in particular has heated up considerably over the past few weeks. If anything, I turn this around and go after established players (like Longoria) who’ve disappointed this season. Some favorites along those lines: Brian McCann, Allen Craig, Billy Butler, Robinson Cano, and Jay Bruce. I’d be more reluctant with players of that ilk who’ve battled injuries in the fairly recent past. Joe Mauer (and maybe Dustin Pedroia, though it’s always tough to tell if he’s playing hurt), this means you.

Apparently I have a reputation for overvaluing players in my league because I don’t want to part with Mike Trout unless I get back a top ten player and a top ten pitcher. What do you feel is a reasonable bounty for Trout? Am I overvaluing?
— Nico

The answer here depends on how deep your league is. For instance, my home league is an 18-team mixed. With so many good players already on rosters and so many slots to fill, trading Trout for multiple players can make lots of sense, and nullify the standard idea of always pursuing the best player in a deal. In something like a 10-team mixed league, the utility of getting three or four pretty good players for someone like Trout is diminished, to the point that the only way you should consider trading him is if you’re getting one or two superelite players in return. ESPN’s Fantasy Baseball Player Rater has Trout no. 3 among all players (hitters or pitchers), a hair behind Giancarlo Stanton. If we’re assuming a 10-team mixed league and you want to stick to top-20 guys (i.e., including the top 10 hitters and top 10 pitchers), you’d be talking about something like Trout for Adam Wainwright and Jose Bautista. I’m not sure if you’d get that in return, but if you’re going to deal Trout, that’s the kind of move you could and should try.

Matt Cain’s statistical luck seems to have corrected itself in the last 1½ seasons. Are there any signs of hope that he’ll improve over the 2nd half? Outside of name value, he’s pretty droppable. Thank you.
— Chris

Jeff Sullivan and I discussed Cain on this week’s podcast, so I’d recommend you check that out. Long story short, Cain did indeed defy the numbers for years, in particular posting abnormally low home run–to–fly ball rates. That figure has spiked to career-high levels this year. We might expect that rate of one homer for every seven fly balls to dip back down a bit, and his 67 percent strand rate is the 10th-lowest in baseball, probably an unsustainable fluke. Still, Cain’s walking more batters than ever before, and has never carried the elite strikeout rate you’d want from a top pitcher. In a standard 10-team mixed league, he’s clearly below the Wandy Line at this point and isn’t the best streaming option either. He might improve a little in the second half, but it’s hard to project a return to the ace-level stats he once put up.

My fantasy team is running on fumes, specifically my offense. Long story short, a few of my key players are Mark Trumbo, Wil Myers and Brandon Belt. I’ve been relying on trying to hit (figurative) home runs with the top callups this year – Jon Singleton, Gregory Polanco, George Springer and Oscar Taveras. Who might be some good, deep offensive pickups for the second half? I’m in a 12-team moderately competitive league with almost no trading. Only way to get better is the waiver wire.
— Mike

Jorge Polanco just got called up (from Single-A) and looks like he’ll start for the Twins. After that, the pickings get slim, since most of the top hitting prospects who’d be ready to play in the majors this season are already up. Joc Pederson might be the most attractive of the leftovers, but he’ll have a devil of a time cracking an outfield that includes Puig, as well as three underachieving outfielders making a combined 800 kazillion dollars. The best hope here would be for another outfielder to join Carl Crawford on the DL, which could open the door for Pederson to take over in center field, at least for a while. If you have a deep enough bench to stash him and can wait out the minor injury he just suffered that’ll keep him out another week (before a potential call-up at some point afterward), few prospects offer a more enticing power/speed combination.

Just a Little Patience: Are Sam Hinkie and Pat Riley Two Sides of the Same Coin?