Just a Little Patience: Are Sam Hinkie and Pat Riley Two Sides of the Same Coin? 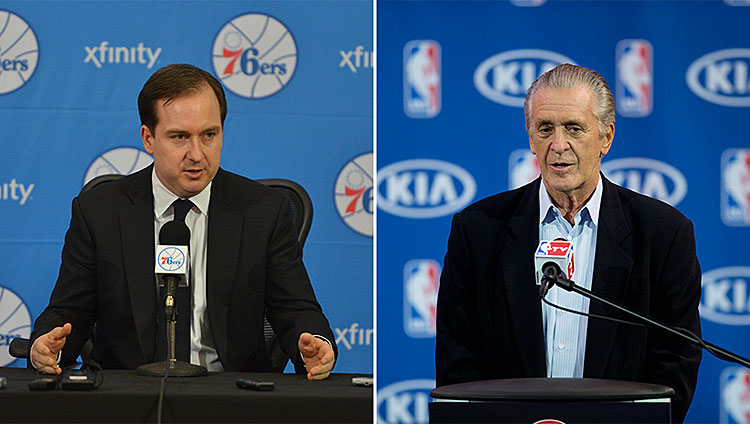 “Today’s social media is interesting for me, because you sort of get a chance to interact with fans in a way you didn’t before, and you get a chance to sort of see how people feel about what’s happening with our team, and, I have been … last year I was pleasantly surprised, I would say I’ve been borderline shocked in the last few months at a bunch of things. One, just how smart our fans are, and how much they understand the price you have to pay to go to where you want to go.” —Sam Hinkie

In every era — pre–shot clock Mikan bronze age, pre–3-point line Bill Russell middle ages, the Magic-Bird renaissance, the colonial expansion of the MJ Bulls, all the way to our current post-lockout, post-CBA, process-over-results NBA — the teams that put themselves in the position to win the title year after year end up setting the tone for the rest of the league. And, historically, the way to contend for the Finals — with very few and very notable exceptions — is to plain old have better players than everyone else, i.e., have superstars.

How a team acquires its superstars tells you everything about its ideology.

While watching the videos of Sam Hinkie’s post-draft press conference and Pat Riley’s post-Finals press conference, it struck me how perfectly these two men embody the evolutionary changes currently at work in the league.

Riley is the old-school basketball lifer, the slick fixer, and the grizzled fighter telling you how he scraped for everything he has while wearing a $5,000 suit, carrying a leather pouch full of championship rings, and questioning your manhood during bone-crushing four-hour practices.

Hinkie is of the new breed of data-driven front-office technocrats. He has the sunny vigor of a banker discussing potentially exciting new funds, drops game-theory management speak in interviews, and projects the studied confidence of an actuary when discussing just how likely it is that Joel Embiid’s navicular bone will fracture again.

Some of the differences between the two men can be chalked up to their teams’ respective positions on the rebuilding-contending-declining arc. Riley is calling on every ounce of his slicked-back swag to convince his star players, in the wake of an ego-bruising Finals loss, to stay. And he’s not above suggesting that LeBron James, Dwyane Wade, and Chris Bosh would be cowards for wanting to leave South Beach.

Hinkie, without the benefit of the neon art deco of a state income tax–less, world-famous party town framing his silhouette in the office window, has concentrated his efforts on increasing the Sixers’ odds of drafting star players. He has moved or entertained moving anyone and anything not nailed down for picks. And, in the short-to-medium term, he has put a product on the floor that resembles an empty shopping cart with two rusty wheels careering down a steep hill.

Now I don’t mean to suggest that the Riley-led Heat are some sort of Luddite outfit, churning butter by candlelight, or that Hinkie somehow lacks the old-school philosophical pugilism of the league’s handchecking, hard-fouling salad days. Miami, as a franchise, is famously one of the most analytics-aware teams in the league. And in Part 2 of Hinkie’s post-draft press conference, he went into a digression about the Sixers (someday, years from now) “bringing violence” to other teams at the rim, a comment that caused Sixers blogger Michael Levin to go full Kool-Aid Man.

Observing that Riley and Hinkie are generationally distinct is not the same as calling Riley a dinosaur or Hinkie a soulless investment banker.

On closer examination, Riley and Hinkie are essentially preaching the same thing in their respective interviews: patience. And it’s when the two start talking about the same thing that the contrast becomes apparent.

Riley couches his request for patience in barely concealed belligerence. When things get tough, you stand and fight; you don’t run. Forget that LeBron left Cleveland under not dissimilar circumstances to come to Miami four years ago, or that Riley himself left New York under less than amicable terms. This is a man who resigned via fax, after all. It doesn’t matter. There’s Riley pounding on the table, the devil-may-care lines around his eyes just daring you — daring you — to contradict him.

Hinkie talks about patience as an investment and then goes about detailing why it’s a sound one. Sure, the Sixers won 19 games last year, four fewer games than the number of players who suited up for them. They played an up-tempo style that seemed tailored specifically to make winning games unlikely, and they probably won’t have either of their first-round picks available to play next season (in the case of Dario Saric, for at least the next two seasons). That’s just the price you have to pay to get back to where you want to go, to get back to contending. Hinkie has done the research, he’s crunched the numbers, he’s talked to the experts, and that’s why he can convince you that taking Embiid was actually the only responsible thing to do for a franchise in the Sixers’ position.

These are two diametrically opposed approaches, the gut and the head, both valid in each circumstance, as long as their intended audiences — LeBron and Sixers fans — believe.