The Raptors, the Nets, and a Trip Down Memory Lane 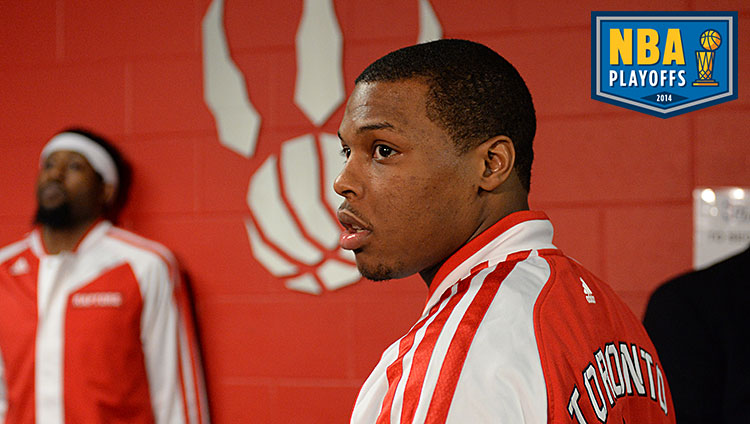 Maybe you spent your first few waking hours last Saturday the way I did. Even before wiping all the sleep from your eyes, you slapped around the nightstand looking for your phone, tapped and swiped your way to a familiar destination, and put on your headphones just to close your eyes again. The first five seconds take you somewhere — the whirring of air, the sound of motion, via intermittent clangs of steel on steel that let you know you’re on a train. Well, except you weren’t on a train. You were still in bed. Those first five seconds of “The Genesis” have always been comforting. It was the 20th anniversary of Nas’s Illmatic, an ultimately arbitrary designation, but a fantastic excuse to reacquaint yourself with an old friend. Between Illmatic and the Bad Boys 30 for 30, last week was the week to pine for the good ol’ days.

The playoffs kicked off last weekend with the Brooklyn Nets and Toronto Raptors, a matchup with so little whip appeal, you couldn’t blame uninterested West Coasters for sneaking in a couple more hours of sleep in preparation for the real games.

Yet, through the magic of social media, you could sense something was brewing. Late on Friday, images of the infamous Toronto Sun back page (Raptors vs. Dinosaurs) had emerged on Twitter. By the second quarter, anyone on Twitter could’ve found the Vine of Raptors GM Masai Ujiri’s “Fuck Brooklyn” outburst at a team rally. All of it was perfect. On the 20th anniversary of Illmatic, we were witnessing the genesis of something straight out of the ’90s playbook — legitimate, if media-generated, playoff beef between two teams that couldn’t be more different.

The Nets and Raptors series is a clash between old-school and new-school values, but matching each team with its corresponding pole depends on your angle of perception. On a very literal level, the Raptors are new school — their average age is a year younger than the league average, and nearly four and a half years younger than that of the Nets, the third-oldest team in the league. But the Raptors are also the bearers of one of the most classic lineups in the league. Their starting five follows an archetypal construction model: the hard-nosed point guard; the star shooting guard capable of hitting tough shots; the rangy swingman; the blue-collar power forward; the 7-foot giant down on the block. It’s the NBA equivalent of a ’50s American nuclear family.

The Nets? They are a band of aging polymaths who, through trial and error, have discovered that losing their position was the key to a second life. They, in old age, are also new school. Instead of being sorted by position, their players fall under two categories, based on general physique: flesh tanks with functional turrets (Deron Williams, Paul Pierce, Joe Johnson, Mirza Teletovic, Alan Anderson) and outer-dimensional cyborgs (Kevin Garnett, Andrei Kirilenko, Shaun Livingston, Mason Plumlee). Their relative uniformity across these categorical lines means the team is ready to defend most situations and switch assignments aggressively if duty calls, no matter what the combination is on the floor.

Game 1 was a triumph of experience over callowness — good old Pierce taking us on a familiar journey against a bunch of kids who don’t know this time of year. In Game 2, Pierce and DeMar DeRozan swapped positions of glory and embarrassment. It’s been a good series. 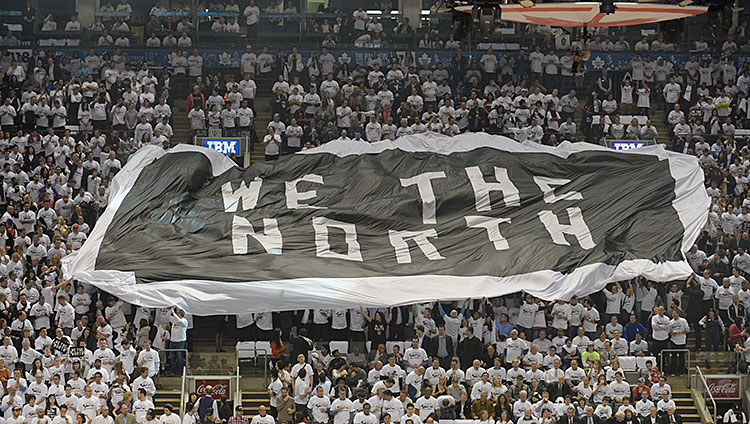 But for Toronto, is good good enough? The Raptors’ “We the North” initiative, “Fuck Brooklyn,” the tabloid headlines, the massive organized militia that shows up outside of the Air Canada Centre to support the Raptors — it’s all in hopes of turning this spectacle into a cultural moment, not just for the Raptors, but also for the future of Canadian basketball. It’s a promotional tool, a way to get into the hearts and minds of the next generation, a way to connect and inspire — perhaps because the Raptors haven’t had a figure capable of single-handedly carrying the burden since Vince Carter. In that sense, the entire sideshow serves as a megaphone for a team without a cult of personality. It’s the Lil’ Penny to Penny Hardaway, but on a much grander scale.

Case in point: Kevin Garnett issued a warning to the Raptors (and a challenge to Nets fans?) upon stepping into Brooklyn territory. “I don’t know if you can say ‘F Brooklyn’ and then come into Brooklyn,” he told reporters. “So we’re about to see what it’s like.” The players didn’t have a retort; it’s not really their job to have one. But there Lil’ Penny was, in the form of Raptors basketball development consultant Jamaal Magloire (who was an NBA All-Star 10 years ago, because 2004 was a strange time). When Globe and Mail columnist Cathal Kelly asked if he was bothered by Garnett’s comment, Magloire fired back, “Hell, nah. He’s a talker who can’t back it up. And you can print that.”

The Nets aren’t new to this, and it shows. Their fame and experience allow them to fetch from the same well over and over. The only response they need to give (or at least the only response they’ve been giving) is some iteration of the classic “I don’t know who these guys are.” Though, in fairness to Pierce, he’s also had a hell of a time running with the whole dinosaur bit over the first two games. Call it fossil fuel.

It’s been a crazy first round thus far, and no one could blame you if the Raptors-Nets series has slipped your mind lately with all the madness that has ensued since Tuesday. As good as some of the other series have been, somehow it’s this one I can’t stop thinking about. It’s been a warm recall to my early childhood, when these kinds of extraneous storylines actually carried weight. Game 3 is at the Barclays Center tonight. I don’t really have a preference in terms of who wins, but I will be rooting my brains out for a “FUCK TO-RON-TO!” chant.