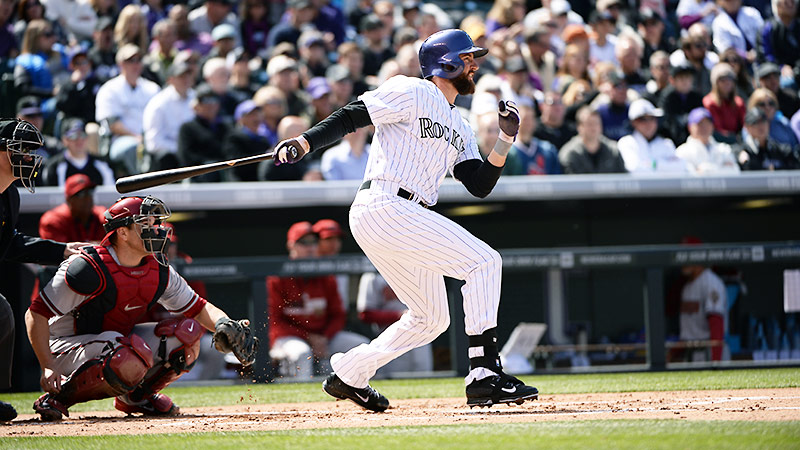 Who Is He? Colorado Rockies outfielder Charlie Blackmon

Where Is He From? Suwanee, Georgia

Is He Related to Jacksonville Jaguars Wideout Justin Blackmon? Not that we know of.

His Game, In Five Words or Fewer: Like a hedgehog playing baseball.

He’s right. Despite his internationally renowned beard and standing as a 2008 second-round draft pick, no one really knew who Blackmon was entering the season. That changed after four games, though. One day Blackmon was fighting for playing time in the Rockies’ season-opening series in Miami; the next he was Colorado’s home opener Messiah, going 6-for-6 with three doubles and a home run. Sensations don’t get any more overnight than that.

Remember when Nick Foles passed for seven touchdowns against the Raiders and Eagles coach Chip Kelly was all “I’m not naming a long-term starter, we’re gonna take this day-by-day” even though Foles clearly deserved the job? Colorado’s center-field situation quickly turned into the baseball equivalent, because Rockies manager Walt Weiss reacted to that 6-for-6 outing by begrudgingly saying, “He’ll be in [the lineup] tomorrow.” Blackmon took that lack of permanent commitment in stride, continuing to grossly outperform fellow platoon members Drew Stubbs and Corey Dickerson, effectively rendering Weiss’s personal affinity for post–Dexter Fowler time-shares moot. “I can’t take Charlie Blackmon out of the lineup,” Weiss conceded after Blackmon’s 3-for-5 outing against the Phillies last Friday. Blackmon could be an ax murderer — ever wonder why they call him “Choppin’ Charlie”? Just saying. — and Weiss would still need to keep him in the lineup considering he’s the only player in baseball batting above .400, currently hitting a Ty Cobb–esque .410.

Social Media Presence? Blackmon’s glorious Twitter handle, @Chuck_Nazty, has led me to two conclusions about which I’m rather confident.

1. Blackmon must be a very nasty individual.

2. Blackmon, who in addition to being a Major League Baseball player also has a degree from Georgia Tech in finance, totally missed out on his true calling: marketing products and services to children in the early 2000s, when “s” was routinely replaced with “z” to signify coolness, overall superiority, and, well, nastiness.

Point at which I stop being classy and drink from the jug. #singleLife pic.twitter.com/B7P3jzQ7ri

Oops, I accidentally "Liked" your pic while trying to enlarge it. We've never met so I better unlike it quickly before you think I'm a creep

And based on his Instagram, it’s safe to assume he enjoys hanging out with really old men in his free time. I have nothing against the elderly, but aren’t there any folks closer to Blackmon’s age range with whom he could chill? Like, say, his teammates? Does anyone else find this deeply unsettling? Anyone? Please raise your hands so I can see you. I want to make sure I’m not alone here.

Trivia Time: Besides relaxing with septuagenarians, what is Blackmon’s favorite recreational activity?

Ctrl-F “my favorite thing to do” here for the answer.

At-Bat Music: The Outfield’s “Your Love”

Hands down the greatest song of all time. This isn’t even a debate.

Video Vault: Blackmon’s DIY ideals are plainly evident every time he takes the field, so his unprecedentedly hands-on approach to ballpark maintenance shouldn’t come as too much of a surprise. Below you’ll find exclusive footage of Blackmon, then a member of the Class A Modesto Nuts, cutting grass the right way (with scissors), brushing the outfield wall with extraordinary dedication, and pursuing a group of unruly trespassers, Louisville Slugger in hand, defending his turf like Clint Eastwood in Gran Torino. It’s quite touching, actually, and the sort of video that rewards repeated viewings. Two thumbs up.

Should We Know Him? Considering his outsize 1.146 OPS, five home runs, and six stolen bases, we should already be well-acquainted with Blackmon, who seems destined for the NL All-Star team and a Bash Brothers II: Rocky Mountain High poster with teammate Troy Tulowitzki. Moreover, Charlie and Troy Take L.A., a documentary based on this weekend’s Rockies-Dodgers series, is forthcoming from Netflix Originals. You should really watch more Rockies games.

The Raptors, the Nets, and a Trip Down Memory Lane

How Should We Evaluate Sidney Crosby's Playoff Performance?