Whose World: The Strange, Wistful 20th Anniversary of Nas’s ‘Illmatic’ 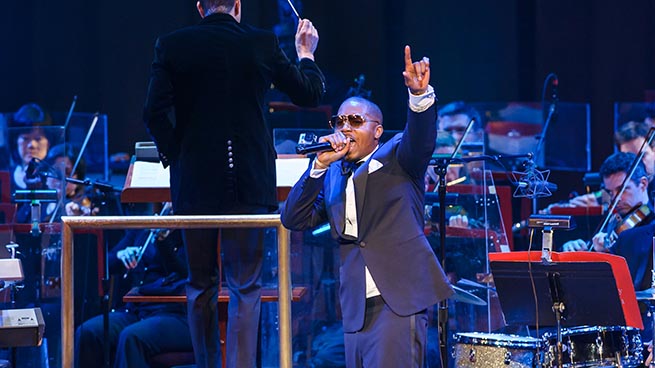 I dropped an ancient manifest of hip-hop straight off the block.
—Nas, “Memory Lane (Sittin’ in Da Park),” Illmatic (1994)

Fancy that 20 years after his street-poetic debut as kid virtuoso from NYC’s Queensbridge housing towers, Nas would don white frills and black tie to host a sold-out NSO Pops extravaganza in a Kennedy Center concert hall built for Brahms. The music was as timeless as the man himself. At 40 years old, his black having never cracked, Nas kept his jazzy vocab self-censored but otherwise faithful to the run-tell-that gusto of his teens, when he first started laying the vocals for Illmatic.

With the Kennedy Center performance and last night’s debut of Time Is Illmatic, a documentary chronicling the album’s conception, at the opening of the Tribeca Film Festival, it turns out that 2014 is a headline year for Nas’s hip-hop legacy. Which is a strange way of putting it, really, given that Nas is still dropping albums, still flipping verses for best-selling albums from sophomore starters as well as his veteran peers. The kid is alive and thriving. But for the most part, Illmatic’s 20th anniversary is playing out as wistful nostalgia for the ’90s.

Rappers, I monkey flip ’em with the funky rhythm;
I be kicking; musician, inflictin’ composition,
Of pain; I’m like Scarface sniffin’ cocaine,
Holding an M-16; see, with the pen I’m extreme.

All this lyrical rhythm perfectly matched the funky drummer breaks, jazz piano loops, and hypnotic bass line cascades of the original cassette. In fact, of all the classic rap albums that an orchestra might score, Illmatic is a relatively flimsy selection — despite its having been produced by a roundtable of only the holiest beatmakers, the album’s soundscape is the glorious minimalism of that old-school New York menace, punched up with motto bravado hooks. (“Represent! Represent!”) Illmatic is no Late Registration.

And Nas is no Kanye West. He’s no Jay Z, no Biggie Smalls — these are the taunts that have spooked his legacy since, well, 1994, when Biggie’s “Juicy” hit the airwaves four months after Illmatic’s release and trumped Nas’s thunder. Then and now, both B.I.G. and Nas checked out as credible correspondents of trife life in the projects, but Nas’s prodigious confidence earned him critical acclaim and middling sales, whereas B.I.G.’s mature, all-inclusive confidence — as a writer, a lover, a comedian, and a crook — earned him rave reviews and a platinum plaque plus our eternal gratitude for the most mackable rap single of all time. As Biggie’s Ready to Die debut bested Illmatic at hip-hop’s Source Awards a year later, Roots drummer Questlove figured the pressures of mainstream aspiration would warp Nas’s creative spirit, if not his love of the game entirely. It turned out to be an apt concern.

A day after his Kennedy Center headline, Nas sat down with black studies professors Michael Eric Dyson and James Braxton Peterson onstage before a packed audience at Georgetown University. Dyson, Peterson, and several student participants conducted all talk of hip-hop’s future as if Nas were excluded from it. As if his irrelevance were a given. Likewise, Time Is Illmatic solely focuses on Nas’s adolescence, his neighborhood ties, his record-label recruitment by Large Professor and MC Serch, and his construction of Illmatic in the earliest two years of his adulthood.

“It’s so weird watching rappers becoming elder statesmen,” Zadie Smith wrote in 2012 of Jay Z and his peers. “Heavy responsibility lands on the shoulders of these unacknowledged legislators whose poetry is only, after all, four decades young.” Nas has lasted nearly three of those decades, and he’s prospered despite even his worst instincts. But he’s also stunted, in a sense: an elder, active statesman who’s most popularly envisioned as a boy. Whatever you make of Nas’s tepidness as a celebrity, or his occasional floundering as the rap game’s Philip Freneau, it’s no less amazing that hip-hop — by now a balding genre — is a wonder of undergrad syllabi and critical essay compendiums. Speaking to Dyson and Peterson, Nas said that as a kid, he dreamed of speaking at universities and winning highbrow validation of his art. That mission has been accomplished, clearly — not just with Nas, but with artists like Bun B and 9th Wonder who’ve joined university faculties as guest lecturers. Professor Dyson may be grayer than Nas, but they dig the same beats and rap the same language.

The ’90s babies who spent their middle school years catching up on Nas’s discography are perhaps the last gasp of a generation familiar with Illmatic’s Clintonian vernacular (beepers! “Funky rhythm”! Cassette lingo!) and pre-Jeezy staccato. Reporting from Nas’s set at the Kennedy Center last month, Adam Plunkett wrote of the crowd, “No one was disorderly or even especially young,” which is an inversion of Illmatic’s atmospherics if there could ever be one, an even starker contrast than the swell of strings.

Hip-hop, we’re told, is the most important musical movement of the past half-century, and the most pervasive pop-cultural force of the same span. In February, VH1’s Tanning of America “rock doc” — hosted by rap mogul and early Nas mentor Steve Stoute — chronicled hip-hop’s marginal origins in the Bronx and revolutionary march to the West Coast and eventually all coasts. Per the genre’s founding charter — drafted by the likes of KRS-One and Public Enemy’s Chuck D, rebels without pause — hip-hop has thrown its haymakers and left a few bruises on America’s conscience. All the latest couture and multimillion-dollar branding of the current crop of artists is just icing on the wrist.

But a generation from now, Illmatic, It Takes a Nation of Millions, Straight Outta Compton, Raising Hell, Aquemini, Resurrection, The Infamous — it is dreadfully possible, no, likely, that none of this fury and/or genius will matter as it does today, some 20 years later. We, the original fans, are “old,” but we can’t help but feel that it’s the kids these days who are laming out. Case in point: At this year’s Coachella festival, Nas performed a modified Illmatic set, with cameos from Jay Z and Puffy. The millennial crowd went limp — a sea of slack nods, a chorus of mumbles, all failing the precise vibe of the source material. A bummer, obviously. Worse yet, if Outkast’s glitchy revival a night earlier is any indication, Aquemini has been relegated to dad-band obscurity, meaning “Rosa Parks” is dull and ancient history. What a loss for words.

Despite hip-hop’s original vision of instigation and upheaval, it’s very likely that future curators may honor only the hottest of the pop and the frilliest of the fringe. But if Illmatic endures only as the diary of crime, poverty, and prodigy, the album endures nonetheless. Nas’s later three albums of the ’90s all repurposed Illmatic’s original cover photography — the ghetto barracks in the background, superimposed with a mugshot of a kindergartner, cynical since his conception, having always suspected that American history wasn’t built in his favor.

"I tried to get him to laugh by wearing pasties with his face on them. Of course, because Kevin (Spacey) wants to win whatever the game is and because he always wins, he did not laugh. He waited until the director said 'Cut' and then he laughed." - Kate Mara (still Team Kate over here, btw)