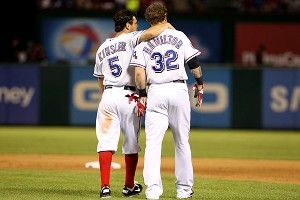 First, Zack Greinke flew off the board, signing the record-setting deal with the deep-pocketed Dodgers that we all should have expected. Then the Diamondbacks traded a wildly talented starting pitching prospect for Cliff Pennington 2.0, satisfying their need for a second shortstop acquisition in two months and all but ensuring that Justin Upton would be pulled off the trade market. Just like that, the Texas Rangers — the team with the best combination of money to spend and attractive trade chips to offer — were aced out of their two favorite targets of the offseason.

Hot Stove disappointments happen every year, to every team. But these aren’t your pennant-winning Rangers of 2010 and 2011. Michael Young is gone. Mike Napoli is gone. Neftali Feliz’s arm is in dry dock. And Josh Hamilton is in limbo. Last season ended with a wild-card game loss and an early exit. Could the team pegged as the AL’s new power just a year ago become an also-ran in 2013?

As much talent as Texas has lost to free agency, injuries, and general attrition, this is still a promising team. For that, the Rangers can thank a farm system that keeps pumping out high-level talent. Jurickson Profar won’t turn 20 until February, but he’s an all-world talent who could step into an everyday shortstop or second base job right now. Leonys Martin’s an intriguing center field prospect depending on how the rest of the offseason shakes out. Mike Olt could provide a potent right-handed bat in Napoli’s stead, assuming he isn’t traded by next week. And that’s not counting the talent dotted throughout the roster, with a still-solid rotation fronted by Yu Darvish, and reliable veterans like Ian Kinsler, Elvis Andrus, and Adrian Beltre holding the fort.

It might not be enough, though, not in an AL West that includes the Angels’ loaded offense and upgraded bullpen (albeit with a diminished rotation) and a young A’s team coming off a division title. So what’s the next move?

Bringing back Josh Hamilton on a four-year deal with a high average annual value seems like the obvious move. Hamilton’s risk factors range from his age (he’d end a four-year deal in his age-35 season) to his bouts with injuries, his sometimes terrifying batting eye, and his history of substance abuse. Given those risks, the Dodgers and Yankees probably not bidding, and Hamilton telling the Rangers he’ll give them a chance to match any offer, his return seems like a done deal. Then again, the Rangers were widely rumored to be the front-runners for Greinke, until they weren’t. And we’ve seen enough 11th-hour, Mystery Team swoop-ins over the years to make you wonder if Seattle or Philly or a team no one’s talking about might make Hamilton an offer he can’t refuse. Especially given how revenue streams are exploding league-wide.

After losing Young and Napoli and generally looking like a very different team than the one that made the World Series 14 months ago, Hamilton leaving would be a shock to the system for many Rangers fans. But it’s still very early in the offseason, and there are Plan C’s and D’s out there, if A and B don’t work out. The B.J. Upton signing and trades for Ben Revere and Denard Span thinned out the number of outfield-needy teams still out there. So if the Rangers don’t trust Martin and wanted to add speed and defense to their lineup, they could outbid the league for Michael Bourn. Nick Swisher’s got a long track record as a reliable power- and on-base threat; but the Yankees eschewing long-term deals, and the industry’s continuing bias against moderate-batting average/high-walk hitters (10 years after Moneyball) could make Swisher a highly affordable option in an outfielder corner, at first, at DH, or all of the above. A.J. Pierzynski could form a nifty lefty-righty with incumbent catcher Geovanny Soto. The Rangers could trade for Mike Morse if the Nationals re-sign Adam LaRoche. They could play Profar every day and move Kinsler to first. Options abound.

The pitching market’s also still rich with possibilities. The rumor that’s garnered the most traction is a potential trade with the Mets for R.A. Dickey. There are built-in risks, certainly. Dickey’s 38. He’s a knuckleballer, and knuckleballers sometimes just lose it. Going from pitcher-friendly Citi Field to the bandbox in Arlington is a frightening prospect, and Dickey already failing once for the Rangers doesn’t help allay those fears. For many, Dickey’s a one-year wonder — the defending Cy Young winner, but also someone destined for a nasty crash back to Earth. Counting on Dickey to repeat his 2012 season is a fool’s errand, if for no other reason than off-the-charts performances almost inevitably lead to some regression afterward. But Dickey’s no one-year wonder. He’s a front-line starter, his knuckleball an asset that could help him retain his value long past the point where most pitchers call it a career. He’s expressed interest in signing a contract extension, such that the Mets, Rangers, or whatever other team ends up with his services could control his rights for the next three years at an average of about $10 million a year. You can tie yourself in knots looking for red flags in Dickey’s résumé. But a defending Cy Young winner at 3 years/$30 million would be a great get, especially compared to Greinke’s $147 million payday, even the contracts handed out to far less accomplished pitchers.

Trading two good, young players for Dickey is just one possibility of many available on the pitching side. Anibal Sanchez’s numbers aren’t far from Greinke’s or James Shields’s over the past three seasons, and Sanchez wouldn’t cost nearly as many dollars as Greinke, nor would he cost any top-flight prospects to acquire, the way Shields did. Edwin Jackson is perceived in some baseball circles as a disappointment, given he was touted as a future ace coming up as a prospect. But he’s been a 3-to-4-win pitcher over the past four seasons, and figures to come relatively cheap, if the bargain one-year deal he got last offseason is an indication. The Rangers could also trot out Yu Darvish, Derek Holland, Matt Harrison, Alexi Ogando, and Martin Perez to start the year, hope for a late-season comeback from Feliz following his August 2012 Tommy John surgery, or make a big trade in-season, the way they did with Cliff Lee.

These are the luxuries afforded to you when you have one of the broadest collections of talent in the game, to go with greater resources than almost anyone else. You can sign the best hitter on the market or make a big trade, hand out a five-year deal for a starting pitcher, or wait out the market knowing you’re probably covered. So far, the Rangers’ offseason hasn’t gone the way they might’ve hoped. That doesn’t mean it can’t, or won’t, end well.