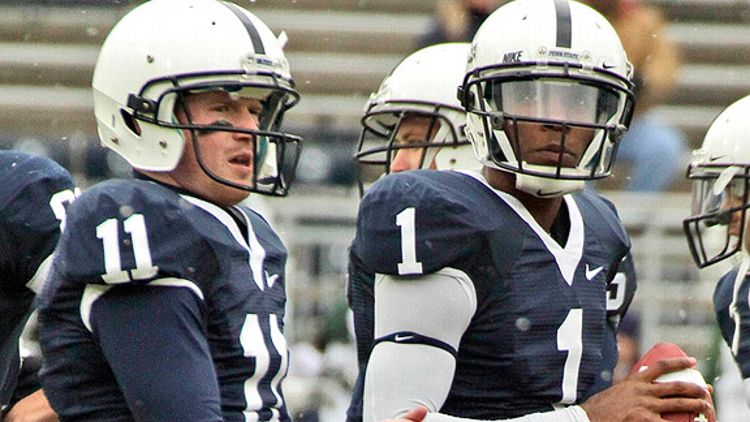 His name was Dayle Tate, he was from Springfield, Va., and he looked like this:

This picture (photocopied from my decaying edition of the Penn State football media guide) was taken in 1979, which accounts for both the plaid sport coat and the Larry Wilcox coiffure. Heading into that season, Tate was the de facto starting quarterback for the Nittany Lions, who came six inches and an Alabama linebacker from winning a national championship the year before. Dayle Tate was a god-fearing young man who dreamed of becoming a preacher, and it was through him that I had my first intimate experience with the allure of the backup quarterback.

I was 6 years old when Tate started his first game. The only quarterbacks I’d observed with any regularity were Chuck Fusina and Terry Bradshaw, who were each successful enough by then that no one questioned whether they were suitable for the job. (Fusina left Penn State in 1978 as the school’s all-time leading passer. He is also known as the most outstanding mustachioed quarterback in USFL history.) Until Dayle Tate, I didn’t know that fans were capable of jeering a member of their own team; the first time it happened, I thought the opposition must have engaged in underhanded horseplay that I was too young to comprehend. But soon enough, Tate’s perceived ineptitude became a story in the local newspaper, a running theme of the 1979 season, and when you live in a college town, there is nothing that incites gossip and hearsay quite like a quarterback controversy. I overheard my parents’ professorial colleagues jousting about it at dinner parties. I’d listen as angry callers clogged the lines on the afternoon sports talk radio shows that I listened to while bouncing a Nerf ball in my basement. Everywhere you went, this was the argument. We’d mock Dayle Tate on the playground at recess, because that seemed like the proper thing to do.

Where Is Micheal Ray Richardson?

By the end of that year, Tate’s name had become attached to every imaginable expletive. He was fast losing playing time to a kid from Altoona named Frank Rocco and future Super Bowl hero Jeff Hostetler, who would transfer to West Virginia after losing a quarterback battle with Todd Blackledge. The very sight of Tate’s number 17 prompted ferocious booing; he did not play in Penn State’s Liberty Bowl win over Tulane, and he quit football altogether after breaking his jaw the following spring. He is now a footnote in the annals of Penn State history, known mostly as the quarterback who bridged the gap between Fusina and Blackledge, a throwback to those days when an 8-4 season at Penn State was considered a regional cataclysm.

There is nothing like a quarterback controversy in college football. This is not to say that every quarterback battle isn’t at least a little fascinating, but in the NFL, when these situations arise, there is usually a known commodity and an unknown commodity (See: Brady-Bledsoe, Favre-Rodgers), and the argument arises over whether it is more prudent to rely on a past-his-prime veteran or to reboot the system. That’s not how it goes in college football: Often, when an established commodity departs, there are two, or three, or even four young men who have not played in any game more consequential than the PIAA semifinals, who are nothing more to us than faces and names and gaudy high school statistics. And so it becomes about identity, about reading into small sample sizes, about taking sides based on half-formed impressions and cultural biases. If left to fester for more than few weeks, quarterback controversies branch off into complex conspiracy theories and expose deep-seated insecurities. If left to fester even longer, they can alter the very perception of the program itself. In Saturday’s 27-11 loss to Alabama, Penn State alternated quarterbacks at least eight times. A stoic sophomore named Robert Bolden started the game. After he led one moderately successful drive and one failed one, in came Matt McGloin, an undersized former walk-on who is well liked by both his teammates and his coaches. Bolden is clearly the better athlete, but McGloin is better in the role of quarterback. He runs a loose huddle. He makes off-color jokes. He’s Brett Favre without the size or the arm strength, which became clear when nearly every pass he threw against a swarming Alabama defense was almost picked off. By halftime, Alabama led 17-3, but it might as well have been 58-3, and so Penn State used the final quarters as something like a scrimmage; in went Bolden and in went McGloin and in went Bolden and in went McGloin again, and even though the two are trying hard to project some kind of solidarity, neither looked comfortable with this arrangement.

Bolden was named the starter at the beginning of last season, one of the first true freshmen to be named to the position in Paterno’s Victorian reign as head coach. When he suffered a concussion against Minnesota, McGloin took over, led Penn State to a come-from-behind win and two more victories over middling Big Ten competition, and then threw five interceptions in an Outback Bowl loss to Florida. Bolden didn’t play at all in the bowl game, and spent the spring very publicly contemplating a transfer. Somehow, the Penn State coaching staff convinced him to stay.

Of course, Penn State is not the only program with a quarterback quandary, but generally, these things start to clear themselves up by Week 2. In Texas, Case McCoy appears to be emerging as the answer, ahead of Garrett Gilbert, and at Notre Dame, Tommy Rees has probably eclipsed Dayne Crist after leading what would have been the winning drive against Michigan (if Tropical Storm Denard had not intervened). But I don’t know where Penn State goes from here. This might be the most confounding moment in the history of Paterno’s tenure, and for a coach who has become a regular target of Abe Simpson jokes, this kind of indecision can be crippling.

At one level, Bolden seems like the obvious answer, but his confidence is clearly shaken. McGloin is less flappable, but no one seems sure if he’s got enough talent to be a consistent Division I quarterback. It’s a mess now, fodder for all sorts of sound and fury; by the fourth quarter, the Penn State crowd was so perplexed that it didn’t even know which quarterback it was supposed to be booing. Meanwhile, on the opposite sideline, Alabama coach Nick Saban, facing his own quarterback issues, chose A.J. McCarron over Phillip Sims, and McCarron rewarded his faith by completing 19 of 31 passes and managing the game in the way his predecessor, Greg McElroy, so often did. Saban might have defused the situation with his decisiveness; his team should once again compete for a national championship. Paterno has perpetuated the situation by failing to make any decision at all; his team will be lucky to finish the season at 8-4.

Three decades ago, as Dayle Tate flailed through blowout losses to Texas A&M and Nebraska, we considered it a painful moment of transition for a school that would eventually find itself again. But Penn State is 1-13 against Top Five opponents since 1994, and the question is no longer really about Bolden or McGloin, or about the allure of the backup versus the starter. After a while, it isn’t about the quarterback at all. It’s about the system.