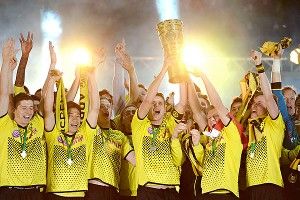 This didn’t feel like just another end to a season. In the hours following Borussia Dortmund’s 5-2 triumph over Bayern München in Saturday’s DFB Cup Final in Berlin, we were gifted with reactions as illuminating as the bit of theater that unfolded on the Olympiastadion pitch earlier that night. The victors were flush. Bayern CEO Karl-Heinz Rummenigge’s take on the evening (a “disgrace,” “every Dortmunder goal was a slap in the face”) will likely be ringing in every Red’s ears until they finally lock horns with Chelsea at home in the Champions League final this coming weekend. But a post-match press exchange (via Die Zeit) with Bayern striker/smoothie Mario Gomez bottled the moment best.

But they were that good. Since moving over from Mainz in 2008, Dortmund manager Jürgen Klopp has installed a kinetic, punchy, extraordinarily efficient (even by German standards) style of play that’s seen an ostensibly starless squad hustle to the top of the table by outrageous margins in the past two years.

In the German Cup Final, held at the tail end of a campaign in which they set a record for points in a season (81) and hoisted their first domestic double, you got an electric glimpse of it in real time, as Dortmund left Bayern, the longtime dominant force in the Bundesliga, beleaguered and befuddled.

It was their fifth consecutive victory over the Bavarians and their most impressive to date. Manchester United manager Sir Alex Ferguson was in attendance, reportedly there to evaluate Dortmund’s attacking midfielder Shinji Kagawa. And it was Kagawa who drew first blood in the third minute with a clinical strike in traffic after Borussia’s Jakub Blaszczykowski pounced on a listless backward pass from Luiz Gustavo Dias. And it was a wondrous through ball from Kagawa, just before the half, that made way for the first of Robert Lewandowski’s three goals, the one that ultimately put the game out of reach. Save for the odd first-half surge and some late magic from Ribery, Bayern looked like a team without shape or purpose, their defensive unit practically pleading to be julienned.

It was at once surgical and lyrical — recent matchups between the two have been tight, but this performance on this stage was enough to move some to finally suggest the possibility that Germans were witnessing a changing of the guard. Mario Gomez wasn’t just pouting, he seemed genuinely worried about the future. And “The Dortmunders,” a 68-year-old relative (casual Bayern fan Greuther Fürth lifer) told me on the phone Sunday night, “were so fast and so quick with the ball in the middle of the field, they looked like Spaniards.”

As Bayern prepares for their date with Drogba and Friends, Dortmund find themselves in an exciting place. While it looks as though Kagawa’s already looking at condos in Manchester (and disgruntled Paraguayan forward Lucas Barrios is already set to ply his trade for mountains of cash in China), they’ve got not only a strong group intact (see: Neven Subotic, Mario Götze, Lewandowski, and so on) but a first-class, similarly symbolic transfer on the way: nascent 22-year-old German international and Dortmund native Marco Reus, who, unlike Gomez and goalkeeper Manuel Neuer most recently, spurned Bayern’s wealth and cachet. Even if Bayern raise the Champions League trophy Saturday night, this season, quite possibly many more seasons to come, belongs to Borussia Dortmund.