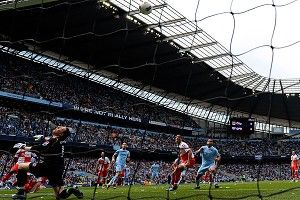 The United States is unequivocally the best place in the world to watch football. With all 10 of the final Premier League matches available on television or online, even England couldn’t hold a candle to the coverage of The Sport of the Future here in America. Look out, competitive camel jumping — soccer is on the move.

And what a day it was. By beating 10-man Queens Park Rangers in a frantic finale, Manchester City won its first league title since 1968, shed their long tradition of self-harm, and validated the business savvy of sheikhs with money to burn getting involved in football. In this week’s pod, Michael Davies and Roger Bennett attempt to make sense of it all, while taking stock of the rest of the league — everything from Arsenal maintaining third position to Bolton vanishing through the trapdoor. But the football doesn’t stop here. It never does. Just days before the Champions League final, the Blazered Men preview Bayern Munich vs. Chelsea — a day of delight for Davo but a Sophie’s Choice for Rog.