The Powerful New York Yankees, and Why They’re Doomed 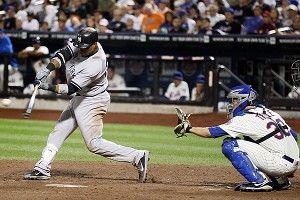 In the fourth inning of Sunday night’s 6-5 win over the Mets, Yankees first baseman Mark Teixeira came to the plate with one out and the bases loaded. In 27 postseason games since coming to the Yankees in 2009, Teixeira has hit .170 with three home runs in 106 at-bats. I won’t get into the whole “clutch” debate, other than to say that as a spoiled Yankees fan, I believe that Teixeira is a chokety-chokey-choker who panics and flails at bad pitches when the pressure’s on. I understand that my position is largely unscientific and based on limited sample sizes, but for some additional evidence, he’s batting .188 with two outs and runners in scoring position this year. Still, there’s a great argument for the other side, including his strong career numbers with two outs and runners in scoring position.

But suffice it to say that it didn’t surprise me when he hit a double-play ball to second base in a situation where a double-play ball is even worse than a strikeout. Luckily, it was far enough to the right that Ruben Tejada had to rush his throw from second, it sailed over Justin Turner’s head at first, and Curtis Granderson scored to give the Yanks a 5-1 lead. But the hit itself was pure Teixeira, and, at least this year, pure Yankees. Here are two incongruous facts about the 2012 Bombers:

1. With 337 runs scored, they have the fourth-most productive offense in the American League, behind Texas, Boston, and Toronto.

2. With runners in scoring position, the Yankees are batting .219, worst in the American League. With runners in scoring position and two outs, the Yankees are just ahead of the Mendoza line at .202. Again, that’s the worst in the American League. When you look at a more telling stat like OPS, the situation is only nominally improved; they’re fifth-to-last and third-to-last, respectively.

So they score a ton of runs, but they can’t hit with men on base. What’s the story? The simple answer could be seen in microcosm Sunday night. First, Nick Swisher hit a three-run bomb to follow Teixeira’s sacrifice fly and put an emphatic end to R.A. Dickey’s no-earned-run streak (leading to a highly disturbing Post headline: “Nicky Mashes Dickey”). Then, in the eighth, Robinson Cano broke a 5-all tie with a game-winning solo shot.

That’s the answer: The Yankees hit home runs. A lot of them, in fact. They lead baseball with 112, and are on pace to hit 255 on the year, which would be good for third all time, only nine behind the ’97 Seattle Mariners and two behind the ’96 Orioles, who set their marks at the peak of the Steroid Era. (Here we tip our caps to Brady Anderson and his 50 bombs in ’96.) That’s a remarkable pace by any standard, and even more impressive in 2012.

A quick look at situational hitting stats shows that Yankees home runs have accounted for 177 of the team’s 337 runs, or 52.5 percent. It’s an absurdly high total, by far the most lopsided percentage in baseball, and says everything you need to know about the Yankee offense; great at hitting home runs, terrible at scoring runs any other way. We’ve looked at Teixeira’s numbers with runners in scoring position, which contrast with his 12 home runs (of the top 30 home run hitters in the AL, six are Yankees), but let’s check out the full list.

To recap, of the 10 hitters, nine of them hit worse with runners in scoring position. Of those nine, all but Ibanez drop at least .29 points, which qualifies as “way worse.” When you factor in RISP with two outs, it starts to get really ugly; seven of the 10 hitters experience a further decline. Aside from Swisher, the only hitter who actually improves in pressure situations, and Jeter, none of the 10 Yankees are hitting above .208 with RISP + two outs.

This isn’t just bad; it’s a team-wide epidemic, and it’s hard to believe there’s not some kind of weird, mutually detrimental voodoo hexing the whole lineup. Last year, I wrote an alarmist “playoff choke alert” post about Swisher, Teixeira, and Cano. I was right about Swisher and Teixeira, and wrong about Cano. And here’s where we get to the doomed part. The Yankees pitching staff is good, but not great, the same way it’s been for most of the last decade. CC Sabathia is the only pitcher you’d risk calling an ace, and even that’s an optimistic assessment. They won’t be rescued by arms, and the Yankee hitters already have a history of struggling in the postseason (add A-Rod to the trio above, who has had a very rough go in pinstripes aside from his transcendent 2009 run). With the entire team skewing abysmal with runners on base this year, it’s a perfect storm.

My fellow Yankee pessimists know how this story ends; the home runs dry up against superior playoff pitchers, the woeful RISP hitting continues, and the Yankees lose in the divisional round for the fifth time in their last seven postseasons. This is a powerful, fun team built to excel in the regular season, and destined to fail when it matters.