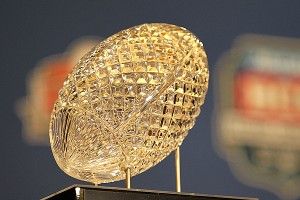 Friends, we’ve gathered … Wait. This is the funeral for the BCS. It has no friends.

Enemies, we’ve gathered here today to say good-bye to the Bowl Championship Series. It died last week. It was 14 years old. In its short life, it was subject to repeated attacks by President Obama. Republican backbenchers turned it into a political football. Sportswriters prayed for its demise. (See the 2010 book titled, um, Death to the BCS.)

But I was a big fan. In death, it’s up to me to be its eulogist. Here are five things the non-playoff got right:

It made college football’s regular season a nerve-racking bloodbath

I liked the BCS because I thought it preserved the excitement of college football’s regular season. You, the BCS’s enemies, countered that the regular season was nice and all, but you’d sacrifice some pre–New Year’s excitement for a longer postseason. That was essentially our argument, plus a lot of cuss words.

Let’s put that aside for the moment, and let’s agree that whatever you thought of the BCS, it made the regular season really exciting. Take a single month of 2011. On October 29, Ohio State dealt Wisconsin its second straight loss and knocked the Badgers out of contention for the national title. Undefeated Clemson lost to Georgia Tech. Undefeated Stanford beat USC, 56-48, staying in the title hunt.

A week later, on November 5, one-loss Michigan and one-loss Nebraska both dropped games. That night, millions watched no. 1 LSU beat no. 2 Alabama. The same night, though almost no one was watching, unbeaten Oklahoma State scored with 2:16 left to sneak by Kansas State.

On November 12, 9-0 Stanford blew its chance at the title game by losing to Oregon. Boise State, which was 8-0, suffered a nut-kick loss to TCU when the Horned Frogs made a late two-point conversion and the Broncos missed a go-ahead field goal.

The week after that, November 19, it was one-loss Oregon’s turn to get knocked out of the title game with their own missed field goal. Oklahoma, which also had one loss, got eliminated when Baylor’s Robert Griffin III threw a touchdown with eight seconds left. But the really amazing game was on Friday night: Oklahoma State lost to Iowa State in double overtime. It bounced the Cowboys from the national title game.

Finally, on November 25, no. 1 LSU polished off no. 3 Arkansas, staying unbeaten. “The game became more of a national game than ever before,” says Bill Hancock, the executive director of the BCS. “People in the Southeast had to pay attention to Boise and TCU.”

What’s strange is that you, BCS enemies, used this near-constant state of excitement to attack the BCS. This chaos, you said, proved that the system was flawed. I dunno. We can fight about the title game, but I thought the BCS made college football appointment TV every weekend.

The BCS changed the controversy

You painted the BCS as an anachronism, the last gasp of old-timey, bowl-riffic college football. But the BCS wasn’t old-fashioned. It was radical.

That was old-fashioned college football. As the Tulsa World noted not long ago, “[O]nly nine times in 35 seasons between 1963 and 1997 did the Associated Press’ top two teams meet in a bowl game.”

The BCS matched no. 1 and no. 2 every year. “It was a radical — frankly, a draconian — change,” says Hancock. Now, its selections weren’t always loved, but notice that the BCS managed, however slightly, to mitigate college football’s central controversy. It moved it back in time (it occurred before the bowls rather than after) and back in the rankings (most years, it involved only the second team in the title game). Old-time college football was a never-ending argument about “Who’s no. 1?” Under the BCS, it became “Who’s no. 2?”

Let’s stay in 1997 for a moment. We don’t just see a sport full of controversy. We see a feudal society. Major conferences, smallish conferences, bowl games yoked to deep histories, rival polls, computer rankings, and the proudly independent entity called Notre Dame — all these things vied for power. The BCS’s great achievement was bringing this world under its thumb.

This turned out to be a really hard thing to do! The BCS had to account for the fact that, say, the Big Ten champs still wanted to play in the Rose Bowl every year. The BCS had to be elastic enough to welcome both undefeated Boise State and a four-loss Big East champion. If the eventual rules were convoluted, that only underscored the enormity of the task.

The proposed playoff would include four teams chosen by a council of elders, who would pay attention to — but not be bound by — strength of schedule, conference championships … and, well, you see where this is headed. But notice that nearly every fan agrees that some central authority should do the choosing. The BCS was the first, imperfect stab at forming a government. It was college football’s Articles of Confederation.

The BCS helped the mid-majors

You had two killer arguments against the BCS: (1) the LSU-Alabama rematch, which you said proved the system sucked, and (2) the fact that the BCS didn’t offer a realistic path to the national title for TCU, Boise State, and the other small schools you regularly martyred in the sports pages.

The second argument is mostly true. But the BCS helped those small schools, too. TCU played in the Rose Bowl and the Fiesta Bowl. The Horned Frogs hadn’t made a major bowl since the late 1950s and weren’t going to under the old system. Their success made them so big-time, they got into the Big 12. Utah played in two BCS bowls and won both. They went from a résumé-filler for Urban Meyer to a Pac-12 member. Boise State jumped from the Humanitarian Bowl to two BCS games. Hawaii played in the 2008 Sugar Bowl.

If the BCS was deadly for the mid-majors, somebody ought to tell the mid-majors. “Anytime you have human involvement, or people involved in the process, you’re going to have second-guessers,” TCU athletic director Chris Del Conte says. “We never second-guessed the opportunity to play in the Rose Bowl.”

The BCS brought America together

Look at yourselves. You’re a rainbow coalition. You are Texas fans and Oklahoma fans, LSU fans and Alabama fans, Utes, Broncos, Horned Frogs. People who, on a normal fall Saturday, hate each other. The fact that you can hate together could mean good things.

Because there’s a lot more to hate about college football. In fact, there’s an obvious next target: the fact that college athletes aren’t paid. The BCS was a decade-and-a-half-long annoyance; the whole idea of “amateurism,” as Brother Branch pointed out, is a century-long swindle. It’s a moral crisis. It’s more important than Oklahoma State getting stuck in the Fiesta Bowl.

The truth is, everyone wasted too many words on the BCS when the real crisis was right in front of us. As the crystal football is lowered into the earth, friends, let us all join hands and hate college football’s phony notion of amateurism. In a few years, I’ll save you a seat at the funeral.

Filed Under: Bryan Curtis, College Football, College Sports, The U