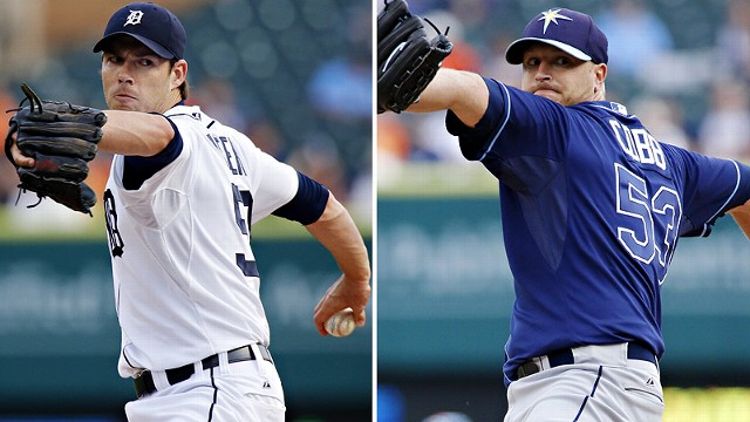 Welcome to this new series, in which we anticipate one excellent matchup per week and diarize it to learn something about the art of pitching. In the process, we also discover wonderful things about ourselves and our lives through the lens of baseball. There is always a lesson at the end. Each pitchers’ duel receives an official 1-10 rating on the Marichal-Spahn Scale, named after the greatest pitchers’ duel ever.

Pitches: Throws a fastball, two-seamer, curve, and changeup. Fastball averages 90 mph. One of the rare pitchers in the league who throws off-speed pitches more than he does a fastball. His two-seamer (12th-most valuable in baseball) and changeup (21st) have been most effective by PITCHf/x measurements. Has a top-five curveball in terms of vertical drop, and has great tailing action on his two-seam fastball (in on righties).

Fun Fact: Earlier this season, he became one of the few pitchers to strike out four batters in one inning. Video can be seen here. Oddly enough, the one guy who reached scored on a balk.

Pitches: Fastball, two-seamer (he calls it a sinker), curve, changeup, slider (rare), cut fastball (rare, also probably the same thing as his “slider”). Fastball averages 88 mph. The changeup has been his best pitch so far (11th-most valuable in baseball), while his curve hasn’t been up to its usual value. His fastball and changeup have excellent horizontal movement, tailing in on right-handed batters. Both pitches rise relative to the average, highlighting a curve that sinks more than any other pitcher’s except Barry Zito and Chris Tillman.

Fun Fact: He may be the unluckiest pitcher of all time. According to the Elias Sports Bureau, Fister had the lowest run support among all pitchers from 2009 to June 27, 2012 (when I wrote this story), with at least 50 starts. During his time with Seattle, he also had the lowest run support of any pitcher with at least 50 starts on a single team in the entire live-ball era. Yay, Mariners!

First Inning: Two quick things about gas stations. One, I just made a classic rookie mistake by buying a Klondike bar and then eating it on the short car ride home. You can’t enjoy food in a car. Not as much, anyway. Second gas station thing: People buying lottery tickets in front of me stirs up so much anger that I think I must be repressing a horrible lotto incident from childhood.

Obviously, because this is a pitchers’ duel feature, we’re hoping for a double perfect game. It’s never happened before, but I tend to think it was waiting for a feature like this. Omar Infante saves a base hit for Fister to keep the dream alive, and Fister escapes the first. Then it’s Cobb’s turn, and after just four pitches he has to face Miguel Cabrera, public enemy no. 1 of the Pitchers’ Duel Diary. And Miggy almost lives up to his rep, ripping a ball just foul down third and fouling off pitch after pitch before lining out to short.

Second Inning: Fister’s tailing fastball is beautiful right now, handcuffing Evan Longoria into a simple groundout to third. Then it’s a cutter to punch out James Loney, and he’s out of the second with fewer than 20 pitches thrown. In between innings there’s a Tim Hortons commercial, which, according to my wife, is something Canadians are obsessed with. I’m getting the Fox Detroit feed, so apparently they exist in Detroit, too.

Cobb just grooves a 2-2 fastball straight down the plate against Prince Fielder, which is a terrifying thing to behold. But it tails out over the plate, and Fielder is a statue. Cobb’s curve is nasty (first-pitch strike to Victor Martinez), and apparently James Shields taught him how to throw it. Martinez looks lost as he chases a tailing changeup out of the zone for a three-pitch strikeout.

Third Inning: NO! Jose Lobaton hits a ground-rule double off Fister, and our dream of a double perfecto is dead. I guess there’s a reason it’s rare? Nah. That’s loser talk. And then … OH MY GOD, you have to see this insane double play by Alex Avila. He chased Lobaton down at third, and … well, just watch.

Cobb reciprocates by losing his perfect game with a walk, and then his no-hitter when Infante rips a single to left. But he, too, gets out of the jam when Avisail Garcia (fielder’s choice) gets thrown out trying to steal and Andy Dirks chases another of those enticing changeups that ends outside the zone.

Fourth Inning: This is pretty great for the first pitchers’ duel ever, right? And it keeps getting better, as Infante robs Ben Zobrist of a base hit for the second time with a very Robinson Cano–esque across-the-body throw from second. Zobrist hates him. Our first real scare comes next, when Matt Joyce tanks a hanging fastball to the wall, where Dirks snags it a foot in front of the fence.

Another quick word about Cobb’s curve: It’s a “spike curve” — thrown with (usually) one or (sometimes) two fingers bent — that looks like a bad changeup and then dives at the plate. You can see the difference in the grip between the spike curve and knuckle curve here, and though they’re often confused, they’re very different pitches. Cobb gets Miggy, gives up a single to Prince, and gets out of the inning with a high fastball to V-Mart.

Fifth Inning: Bad fielding is anathema to a pitchers’ duel, and Garcia gets a black mark next to his name by misplaying what should have been a simple pop out by Loney. A question we have to ask — why is Fister’s curve less effective this year? He’s throwing it at the same rate, and it’s breaking just as much (even a little more, actually). Unfortunately, PITCHf/x’s plate discipline data isn’t broken down by pitch, so it’s hard to tell if he’s throwing fewer strikes, or if batters are laying off, or what. Either way, Fister’s out with a groundout to Lobaton. Avisail is back in my good graces, and on my Christmas card list.

Just a lovely sinking change from Cobb sees Jhonny Peralta flailing at strike three. A generous call from Mike Everitt on another one of those tailing changeups on the outside corner gives Avila a backward K, and an Infante grounder ends the inning.

DOUBLE SHUTOUT! (But while Fister is surviving, Cobb keeps getting better.)

Sixth Inning: Confession: I’ve been looking for Advil for the past three innings, and I just found it. What a great feeling. (For an 80-year-old.) Anyway, just as I dis Fister, he throws what the Fox team is calling a “swingback” fastball that starts on the inside and swerves over the plate, making Sam Fuld look foolish on a backward K. Fister is through another scoreless inning, quickly, and the announcers say those beautiful words: “We’ve got a pitchers’ duel here at Comerica!” Yes! I have chosen wisely!

Cobb is still a beast. He lets a couple on, but gets Fielder to swing and miss on a fastball zooming away, away, always away.

Seventh Inning: OK, I’m delving deeper into Fister’s curve. Using Brooks Baseball’s f/x numbers, I see that in 2012, the curve produced a swing 42.41 percent of the time, a whiff 16.4 percent, was a ball 37.17 percent, a strike 36.13, in play 12.38, foul 13.96. Now, for 2013: The big differences? More balls (41.37), fewer strikes (34.54), way fewer swings (35.74), about half as many fouls, and fewer whiffs by three percentage points. In other words, everything is just a little worse, but it all adds up over the course of a season. Still, the fact that it breaks just as much and goes just as fast makes me think it’s just a matter of getting the rhythm back, rather than having lost anything. (Holy shit, do I feel like a badass detective right now! A nerdy, boring badass, but still.) Loney, meanwhile, lines one at Fielder, and the big man brandishes the nifty glove and doubles off Longoria.

The Fox guys point out that Cobb has only thrown 41 percent fastballs. This surprises them, but we were prepared for this trend. A slick little changeup dooms Peralta to his second strikeout of the day. Another neat feature Cobb brings to the table is a slight hesitation in his leg kick, where he holds it out and lets it hang for a moment, suspended in air, which has to disrupt a hitter’s timing. Unfortunately, Avila was all over him, working the count full from an 0-2 start before doubling down the right-field line. The shutout is in danger until Infante looks silly on a curve-change–high heat 1-2-3 combo.

Eighth Inning: For some reason probably having to do with computer measurements, Brooks Baseball calls Fister’s slow 80 mph pitch a split-fingered fastball, while Fister and everyone else call it a changeup. Amazingly, he’s only thrown 72 pitches so far. His ERA is also less than 3.00 at this exact moment for the first time in about a month. (And it should be noted that both men are doing this against very good run-scoring offenses.) Fister issues a rare walk, but gets out of the mini-jam with a gorgeous, wonderful 74 mph teardrop curve that poor Yunel Escobar has no prayer of touching.

It’s a dangerous inning in theory for Cobb, nearing 100 pitches and the top of the Tigers order, and after a Garcia groundout, a lucky nubber by Dirks leads to an ill-advised wild throw by Cobb, and suddenly there’s a runner on second with one out. He elicits a fly from Torii Hunter, intentionally walks Cabrera, and now it’s decision time for Joe Maddon. Unfortunately for us, with Fielder entering and Cobb over 100 pitches, that’s it for the Rays ace. Bravo, sir. It’s a wise choice, too, as Joel Peralta strikes out the Prince.

A last note: If you had to find exactly why Cobb has been so great this year, especially compared to the mediocrity of his past two years, you wouldn’t look at pitch movement or velocity, which have remained steady. Instead, as you compare 2012 and 2013, the big change you note is that he’s gone away from the sinker (a.k.a. the two-seam fastball), throwing it about 14 percent of the time as opposed to 24 percent last year. He’s also getting more whiffs and staying in the strike zone. It’s become more effective as it’s become increasingly rare.

Ninth Inning: Two other neat facts about Fister: He has the second-highest ground ball–to–fly ball ratio and third-highest ground ball percentage in baseball, and he’s walked as many batters (12) as he’s hit. Fuld reaches on a dinky bunt (HOW DARE HE! Isn’t that such a plucky Rays-type move? Makes me sick), and Zobrist turns a high changeup into a seeing-eye grounder that gets through, sending Fuld to third. It’s super unlucky for Fister, but then again, that’s kind of his thing, remember? Joyce comes through with the sac fly, a wild pitch sends Zobrist to third, the infield comes in, Longoria gets a hit, and suddenly it’s 2-0 and Fister is out. When it’s over, he’ll be charged with three earned runs because life is a farce.

I’m giving this one an 8.8. I want to set a super-high standard, and I think to get above 9.0, both pitchers have to go scoreless into the ninth. Still, I couldn’t have asked for a better first game. Truly a worthy exhibition of pitching acumen.