A New Boss for U.S. Soccer 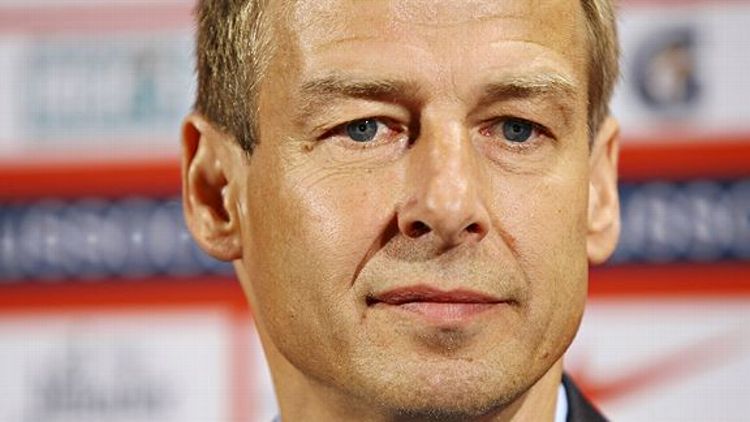 After years of courtship, the United States men’s national team finally got its man. On Monday, U.S. Soccer presented Jurgen Klinsmann as the new head coach. Klinsmann, who is signed through the 2014 World Cup in Brazil, replaces Bob Bradley, who was fired a few weeks after the USMNT’s Gold Cup final spanking at the hands of its archrival, Mexico. Here are three emerging storylines to keep an eye on as we enter the Klinsmann Era of U.S. Soccer.

Watching Bob Bradley talk often felt like watching old people eat. After a summer in which the U.S. women’s national team charmed its way into the hearts of the nation, the USMNT now has a charmer of its own.

Klinsmann might be a German soccer icon, but the California resident was hired as much for his Hollywood savvy and vibrant personality as he was his tactical know-how (which, as many have suggested, is not so hot).

His managerial reputation was made on the success of the German national team in the 2006 World Cup. As the manager of the host nation, Klinsmann’s side played with an aggressive, attacking flair, dazzling many viewers with its style of play. In much the same way that the World Cup changed some opinions about modern Germany, the German national team changed many opinions about German soccer.

Klinsmann, no dummy and no media novice, knows this and knows how to communicate the relationship between nation and national team incredibly well. And make no mistake — he was hired to do exactly that. He wasted no time making the connection in his first press conference as USMNT boss. His eyes twinkling, his fitted shirt casually unbuttoned, California tan evident, he laid a foundation, saying: “I deeply believe that soccer, in a certain way, reflects the culture of a country.”

One of the hurdles that needed to be cleared to get Klinsmann to sign on was the issue of control. Meaning Klinsmann wanted a lot of it and perhaps U.S. Soccer was not ready to cede it. This can only mean that change is going to come to the USMNT. And, simply reading the Internet tea leaves, it seems like fans are ready for it.

Klinsmann has already talked about playing a proactive style, which means no more of Bradley’s reactive, counterattacking philosophy. He said the team wants “to play possession, we want to dictate the pace of the game, we want our players to improve technically.”

Along with a new style of play, don’t be surprised if you see some new faces. The USMNT defense especially needs a total revamp, and the central midfield might be tinkered with to add more creativity.

Perhaps the most striking thing Klinsmann said during his presser was his interest in amplifying the Latin influence and presence on the USMNT. “So much influence is coming through from the Latin environment that needs to be reflected in the national team,” he said.

While you’d be forgiven for thinking everything was going to be sweetness and light and stylish attacking football from names and faces that reflect America today, I couldn’t forgive myself if I didn’t say this: Don’t get your hopes up … at least not too much.

National team reboots take years and years. Then they take more years. Why? Because, unlike when you try to blow up a club side and rebuild it, national teams practice together only on a limited basis and play a limited amount of times. Realistically, if Klinsmann is going to oversee a root-and-branch revamp of the U.S. Soccer setup he is going to need more than three years to get the results fans want. And he might have to go backward before he goes forward.

Problem is, he doesn’t have that much time. World Cup qualifying is right around the corner. And despite the relatively easy group the USMNT has been drawn into, Klinsmann can’t afford any on-the-job mishaps. His biggest challenge might be his first, on Aug. 10 in Philadelphia, when the USMNT takes on Mexico.

About Last Night: The Summer of CC