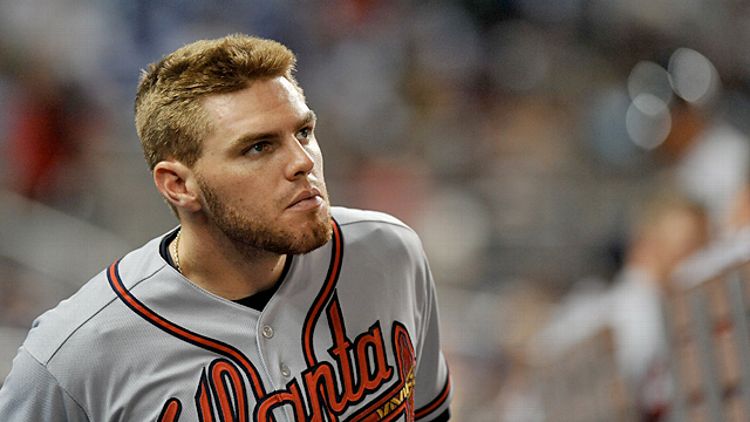 It’s been proven time and again by science that a baseball fan should follow no more and no fewer than 10 story lines per weekend for the maximum viewing experience. Any more and you risk obsession, any fewer and you risk spiritual anarchy. For your health, here are the 10 most alluring MLB attractions this weekend.

You know how when you’re an innocent young child and your parents keep building up Christmas for weeks and weeks, talking about how many gifts you’ll get and how happy everyone will be, and then when the day comes you wake up and rush downstairs only to find that they’ve hung a banner reading, “Santa died and it’s your fault,” and they’re hiding behind the kitchen counter videotaping as your happiness fades to confusion and then to outright sobbing on the living-room floor? My point is, that common American family prank wasn’t nearly as bad as Derek Jeter returning from a season-long injury only to hurt himself again in his first game back. The only ray of sunshine in this cloud is that we got to see him leg out an infield single in his first at-bat, a gritty act of heart and gumption that shows why he’s the greatest baseball player in world history, and the second-greatest human, behind Abraham Lincoln.

9. This Week’s Reason to Watch the Royals: Cleveland (KCR-CLE)

We can now confirm that the Cleveland Indians will have a better-than-.500 record at the All-Star break. And they’ve done it almost entirely with offense; only the Houston Astros have allowed more runs than the Indians this season, and outside of the decent Justin Masterson, the Tribe starters seem to be in a permanent state of disarray. All of this makes them an excellent candidate for regression in the second half, BUT when you play 75 percent of your divisional games against the Royals, Twins, and White Sox, it’s not crazy to think a one-dimensional team can snag a wild card. Take a close gander when they face the Royals this weekend; with the first-place Tigers hosting Texas, the Indians could even sneak up to first in the AL Central on Sunday.

In his last 14 games, he’s been raking with a .440 average, five home runs, 16 RBIs, a bunch of non-Cano-like walks, and an MLB-leading 1.3 WAR. Also, the Yankees are playing the Twins, which is basically an abusive relationship at this point. Did I ever tell you guys I was at the game when A-Rod’s ninth-inning home run tied the ALDS game against the Twins that the Yanks would go on to win in extra innings? Whatever happened to that guy? Anyway, the Yanks are in fourth place in a ridiculous AL East, despite being eight games over .500, and they desperately need some easy wins. And with the disgustingly awful Phil Hughes pitching Saturday, and Poor Derek nursing his wounds, they will most assuredly need Robbie’s bat.

The stupid backlash to Puig’s hot start HAS BEGUN. The answer to the question in this subhead is “probably yes,” but only because like 98 percent of top professional athletes are arrogant. If you grew up with the adults in your life implying that you were special in a certain way, and then life verified that by placing you in a situation where you made millions of dollars for your special talent, you would be arrogant too. That being said, this quote from Puig in that article was hilarious:

“That’s my game,” Puig said Thursday. “I’m going to play my baseball the way I play. We don’t like the way [Gerardo] Parra plays or the way Montero plays, but we don’t go to the press or anybody and talk about how we don’t like it, because we’re more reserved.”

Oh good, Yasiel. I’m glad you guys wouldn’t say anything like that about Parra or Montero to the media. Reminds me of this classic scene from The Office:

David Brent: They must have put you in a grow bag when you were little did they?

Nathan ’Oggy: That’s an old one.

David Brent: Let’s grow ourselves a big lanky goggle-eyed freak of a son.

Nathan ’Oggy: All right, calm down, mate, there’s no need to get offensive.

David Brent: No no, I was joining in …

Nathan ’Oggy: I didn’t call you fatty as soon as I saw you.

David Brent: No I was joining in with …

Nathan ’Oggy: Just don’t have a go at the eyes, ’cause that is astigmatism I’ve had from the age of 5, so that’s what make them a bit bulbous, so don’t just … I didn’t call you the whale-man or, like, blubber-man.

6. Chris Davis, You Have My Respect (TOR-BAL)

I was on vacation in Ocean City, Maryland, last week, and took a day to visit Camden Yards for the first time. The Orioles were hosting the Yankees, and you can imagine my dismay when baseball’s Most Legendary Team was trailing 9-0 after three innings. The only bright spot? I got to see Chris Davis hit two home runs. In case you’ve missed the hype, Davis is the 27-year-old Orioles first baseman who has taken a tomahawk to the AL East this year, and now leads the league in slugging and home runs. Some quick math shows that with 34 home runs in 92 games, he is on pace to hit exactly 59.9 home runs for the season. Now, assuming that Davis isn’t juicing (he told a kid on Twitter he wasn’t, which is rock-solid proof), doesn’t it annoy you that we can’t enjoy a clean pursuit of Roger Maris’s 61 home runs? Why can’t we wipe Sosa and McGwire and Bonds from the record books? We know it’s bullshit, so let’s wipe them out. Instead, we have these stupid, unreachable records that mean next to nothing, and we’re deprived of an awesome story line. And also, since we’re talking about it, John Rocker is dead wrong. Not to get all pretentious — and I’ll admit, I had fun watching the home run chase — but anyone who likes baseball only for the home runs is missing the point and should spare us their fandom.

5. Pitching Matchup of the Week: Wood vs. Wainwright (Sunday, STL-CHC)

ESPN’s Sunday Night Baseball hit the pitching jackpot this week with the best pitchers’ duel of the week. You might not know Travis Wood, whose 6-6 record and total lack of run support disguise one of baseball’s 25 best pitchers. He’s an All-Star this season, but even that barely counts as “recognition”; he’s the token Cubs pick, a beneficiary of the rule that every team needs at least one player on the roster. (His Sunday start also means he won’t even get to pitch in his first appearance.) But Wood has been legitimately solid. He’s completed at least six innings in his last eight starts, never allowing more than three earned runs, and his ERA currently sits at 2.69. The possibly bad news for Wood is that he doesn’t strike out batters at a high rate, and currently enjoys the lowest BABIP among qualified starters at .214, which is almost definitely a sign that he’s been lucky. He’ll have his hands full against an excellent Cardinals lineup and Adam Wainwright, the best pitcher in baseball by WAR. I got really excited the other day because I finally found a free source to see a pitcher’s innings pitched per start and pitches thrown per start at Baseball-Reference. As you can see from that list, Wainwright lasts 7.4 innings per outing, best in baseball and just barely trumping Clayton Kershaw. There are an awful lot of stats you could use to show his excellence, but that one is my favorite.

Maybe it’s Yasiel Puig’s arrogance, or maybe it’s Yasiel Puig’s arrogance (running out of narratives), but the Dodgers have won five straight and poked their arrogant, Puig-esque heads above the .500 waterline. Tonight is a great time to check them out, because Clayton Kershaw, the only qualified starter in baseball with a sub-2.00 ERA, is facing a tough Rockies lineup that produces runs at the second-highest rate in the NL. (Although, to be fair, they’ve scored 246 runs in the thin Rocky Mountain air and just 174 in normal, boring air.) If Kershaw can make it past this game with his ERA intact, he has a great argument to start the All-Star Game, even though it will be held in Matt Harvey’s house.

Eight wins in a row. Astros visiting. There are two conclusions to draw from this. One, the Rays will probably extend their winning streak to double digits heading into the break. Two, the normally passionless fans at Tropicana Field will be positively comatose when they host the worst team in baseball. And the sad part is that I can toss out these insults, and Rays fans won’t even care enough to defend themselves. I don’t think there’s another team in baseball I could say that about, including Houston. Anyway, fine, the Rays are playing good ball, and they’re sapping all the talent from Triple-A’s Durham Bulls, which is annoying for me because I go to a lot of their games. Also, this “winning streak” has come against the Astros, White Sox, and Twins, the three worst teams in the American League. So let’s hold off on the big parade. As a final point, I would like to make it clear that I don’t like the Rays, and you shouldn’t either.

I would like to point out here that the Friday pitching matchup is “Grimm-Fister,” which sounds like a truly terrifying supervillain. The matchup you should really be watching between these two playoff hopefuls, though, is Saturday’s showdown between Derek Holland and Max Scherzer. Scherzer was the subject of this week’s pitchers’ duel diary, a strikeout king with an unblemished 13-0 record, and both men are considered top-five pitchers by the advanced metrics. This probably should have been the pitching matchup of the week. I screwed up, guys. I screwed up.

This series started Thursday, with Freddie Freeman thanking Atlanta fans for sending him to the All-Star Game — above that ARROGANT Puig fella — with three hits and four RBIs in a 6-5 Atlanta win. (Funniest story of the week — the Braves and Blue Jays PR people teamed up to get their guys elected with the final fan vote. The old proverb is true: The Midsummer Classic makes for strange bedfellows.) The Reds are the third-place team from the incredible NL Central, but at 10 games above .500, they’re still positioned as a wild-card team. Which is why the new system is so brilliant; we’ll almost definitely end with a situation where Pittsburgh, St. Louis, and Cincinnati are clustered at the top of the Central, with just games separating them, and it’s nice to know that all of them will at least have a shot. The Braves are ruling the East in a down year (what happened to the Nats???), and this series has the feeling of a potential divisional series preview. With matchups like Arroyo-Medlen, Bailey-Minor, and Cingrani-Teheran filling out the weekend, this one takes the top spot.