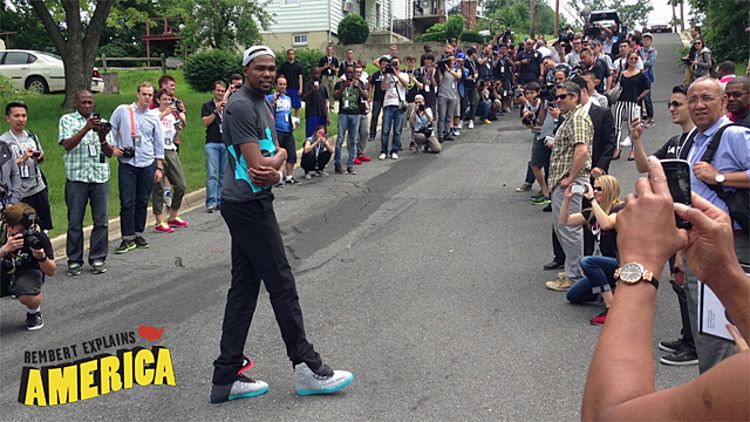 It was a crash course in how to create a narrative.

Arriving in Washington, D.C., on the evening of June 26, I knew only three things about what the following day had in store. One, the trip was in the name Kevin Durant; two, he was unleashing his newest Nike basketball shoes, the KD 6s; and three, time would be spent with him in his hometown.

That last fact is what spurred a completely out-of-the-way, 900-miles-in-two-days detour from Memphis to the nation’s capital.

The meeting place was Washington, D.C., but that isn’t Durant’s hometown. He’s from a place called Seat Pleasant, Maryland.

The next morning, two buses left D.C. at 9 a.m. to transport media members to Seat Pleasant. I woke up at 9:45 a.m. On my phone, there were three texts and four missed calls, all curious as to my whereabouts. The bus was gone. Realizing I hadn’t determined the exact location of Seat Pleasant, I panicked. Then I did a search:

Ten miles. Durant grew up 20 minutes from the White House. I drove 900 miles to see a neighborhood that you can access from the Blue Line. Immediately I began to regret this trip.

I made the quick drive through familiar D.C. neighborhoods, and then out of nowhere, saw and felt everything change. When I arrived in Seat Pleasant, I knew this was no suburb of Washington. This was its own world. Already late, I was suddenly thrilled I’d missed the blogger bus and driven through the town for 15 minutes. I’d gotten a sense of my surroundings before landing at the mystery destination address I’d been given.

A rec center. I knew where this was headed. If this was going to be a day filled with “Started From The Bottom” messaging, there’s no place more authentic than a rec center. It’s like a second home for aspiring pro athletes.

Correction: I thought I knew where this was headed.

In the gym, Durant, Michael Wilbon, and Nike Basketball lead designer Leo Chang were in conversation. Yes, the conversation was about shoes, but also about Durant’s upbringing in Seat Pleasant. As it became increasingly shoe-focused, I wandered around the gymnasium turned set and found the Magna Kevin Holy Grail.

Today was going to be overwhelming.

For a day so authentically “Kevin Durant” in its storytelling, artifacts, and key characters, it was completely scripted. I was torn over how to feel about what I’d gotten myself into, leaning toward cynicism but impressed by Nike’s marketing genius. They nailed every point on the Kevin Durant checklist.

After the rec center, we visited Kevin’s grandmother’s house. And then the hill that Kevin ran up every day to train. One bus trip was narrated by Kevin’s brother and the other by Kevin himself. When we returned to the gym for lunch, we had soul food catered by a Seat Pleasant restaurant. And then, after lunch, we went back into the gym, where Kevin would be given a key to the city by the mayor.

On paper, and even as it was happening, it was easy to lose oneself in the moment and only see the beauty in these events, this dreamlike homecoming. There was always something, however, pinching me, keeping me awake.

The scene outside Kevin’s grandmother’s home.

After Kevin’s mother, Wanda, told a story about what the house means to her family, with her tall and famous son standing beside her, someone yelled from the back, as if scripted, “Wanda, can you tell the clothespin story?” It pulled me right out of the moment. Who was that guy? Why wasn’t he calling her “Ms. Pratt”? What story? I’m sure the clothespin story is relevant and entertaining, but that moment clarified what this event really was.

Though there was the lunch, which, let it be known, was delicious.

After five straight minutes of continuous eating and no breathing, I came up for air and noticed the note card next to my plate.

There was nothing inherently wrong with learning about Kevin’s favorite dish. The whole thing was just starting to feel like one of those headset-aided walking tours.

And then during the afternoon session, Kevin finally received the key to the city. Durant seemed genuinely honored, as did his mother. But then the slick-talking mayor decided to take the afternoon’s festivities into his own hands. And, suddenly, it became the Mayor Eugene Grant show. He seized the moment with a microphone and a camera and an audience that he held hostage for 10 minutes. All that was missing was the collection plate.

Thankfully, throughout this act of showmanship, certain things about Durant and Seat Pleasant remained unchanged. There were the confused glares from the citizens of Seat Pleasant, who stopped whatever it was they were doing — basketball games, walking, delivering mail — upon seeing a police-escorted charter bus cavalcade. Kevin’s brother, in the middle of his tour narration, quietly muttered, “This is definitely the first time I’ve ever had a police escort here” at one point.

There was also Kevin’s mother, who started to cry, while talking about her son.

There were the folks from the neighborhood intent on getting their pictures, despite the fact the local police were intent on keeping them away from the action.

And then, as the day wound down, there were the kids who were not only ecstatic to see Durant but also became wonderful foils on this otherwise perfectly executed day.

Question 2: “Mister KD, how did you feel about not making the playoffs?”

Question 3: “Kevin Durant, how old will you be when you retire?”

There was Kevin helping his mother off the stage and softly telling her to “watch her step” as he took her hand and navigated her down the stairs. Or Durant telling a story about his future offspring and, should they want to play basketball, taking them straight to The Hill to run while he sits at the base in his car reading a book. Or Durant’s childhood coach admitting he had learned from Kevin, who gently responded, “I didn’t know that.” Or Durant saying that his goal growing up was to impress the people who worked at the rec center, some of whom still are employees.

And names like “Ms. Jackie” or “Mr. Harvey,” faceless characters in these stories, reminded you that beyond the hoopla this gymnasium was more than a place where he’d played basketball. This building raised him.

These were the moments that made the day’s homecoming festivities worth it.

Obviously, the ideal scenario would have been hopping in the car and riding shotgun with Durant, as he talked me through his life. But that wasn’t an option. This was the next best thing, however. It wasn’t perfect because it was too perfect. But for a highly curated, closely managed tour, this wasn’t a bad glimpse into a young superstar’s past.

About Last Weekend: The Freak's No-No