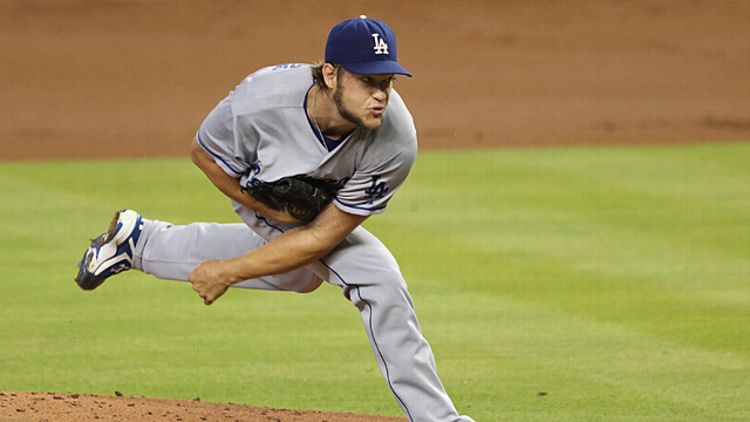 The main message I want to convey up top is that if you’re a real baseball fan, you won’t watch any college football this weekend. Anyone who watches even a minute of college football on Saturday is a traitor to baseball and shouldn’t be allowed to watch the World Series ever again. And now that we understand each other, let’s go to the top 10!

Hey, everyone, it’s a four-day weekend! If you’re a traitor who will be indulging in college football on Saturday, the good news is that you can still get your second baseball fix on Monday. All 30 teams are in action on Labor Day, and most of the games are afternoon tilts.

The arrival of Labor Day means that awful, horrible summer is OVER. It’s been rainy for the past three months in North Carolina, and when you combine that with the heat, it creates this terrible, steamy cauldron that reduces me to a giant walking sweat-man the minute I step outdoors. So hurray for Labor Day. Also hurray for baseball, because on Monday we get to see Clayton Kershaw. With an ERA of 1.72, he’s looking to beat 2000 Pedro Martinez (1.74) for the best season-ending ERA of the millennium. (Doesn’t including the word “millennium” introduce a nice gravity to the whole thing? Totally undeserved, but still.)

How about a .429/.414/.893 line with four home runs and 13 RBIs in his last seven games for the Royals catcher? Also, I love when someone’s batting average is higher than their OBP for a specific stretch, a weird anomaly that happens only because a sacrifice fly is considered a plate appearance but not an at-bat. Unfortunately for Perez, his Royals are now on the dying fringes of the playoff race, and barring a season-saving sweep in Toronto, his heroics might not be good enough to stake his team’s claim to the September pennant race drama.

8. Wait, Should We Pay Attention to the Nationals Again? (NYM-WAS)

If you guys aren’t turned on to the Heard on MLB Tonight Twitter account yet, you’ve got to get there ASAP. It’s constantly hilarious, and totally true, and this was one of my recent favorites:

Amsinger: "Which National League team would you least like to face in the postseason?" Reynolds: "The Nationals"

It seemed utterly inexplicable at the time, but all a sudden, the Nats are creeping up on the wild-card race. They’re now three games over .500 and 8-2 in their last 10, and just 6½ games behind Cincinnati for the second and final wild card. With a big win, they could even reach the coveted “0” milestone in the run differential category! More importantly, the next few series shape up really well. Here they are, in order: Mets, Phillies, Marlins, Mets, Phillies, Braves, Marlins. That’s 23 games, 20 of which are against seriously inferior opponents. The Reds’ schedule, on the other hand, is at least a little tougher: Rockies, Cardinals, Dodgers, Cubs, Brewers, Astros, and Pirates over the same stretch. A few duds, to be sure, but also 10 games against playoff-bound teams compared to Washington’s three. Hmmmm …

7. Miggy, His Abdomen, and the Triple Crown Watch (CLE-DET)

Detroit super-slugger Miguel Cabrera left Thursday’s game against Oakland because of discomfort in his ab, but is apparently vowing to play Friday. Which is great, because while it’s become pretty clear that he’s going to win the batting average and RBI titles in the American League, he’s got some catching up to do in the dinger category if he wants to win his second straight Triple Crown. Baltimore’s Chris Davis is at the top with 47 home runs, with Cabrera in hot pursuit at 43. Cabrera has played five fewer games, but at this point, Davis is even leading in home run pace, which wasn’t true a couple weeks ago. At their current rate, Davis is projected to hit 10.8 more home runs, while the math gives Cabrera just 9.6 more before season’s end. All of which means Cabrera needs to get hot, and also not miss games. I just hope Detroit doesn’t selfishly rest him for the playoffs when a meaningless award is at stake.

The Marlins may stink, but Jose Fernandez adamantly does not. First, let me present my favorite GIF of the baseball year:

Second, let me note that with Matt Harvey done for the season, Fernandez is arguably the second-best pitcher in the National League. He’s sporting a 10-5 record with a 2.30 ERA, and is tied for the second-highest strikeout rate in the league behind A.J. Burnett; yes, better than even Harvey. He’s also 21, and sporting a mid-90s fastball, and apparently able to catch speeding baseballs with some kind of Jedi mind trick. It’s easy to overlook Fernandez since he plays in Miami, but his Friday-night start against the best team in baseball is a great time to get your first look.

5. Pitching Matchup of the Week: Miller vs. Liriano (Friday, STL-PIT)

It’s not that attractive on the surface, which is fair since last week’s duel was a Scherzer-Harvey paper classic. (In reality? Not so great, at least on Harvey’s end.) But hey, you know how many qualified starters in the National League have an ERA under 3.00? Ten. And, OK, Liriano isn’t qualified yet, but he will be, possibly as soon as after this game. A pitcher needs one inning pitched for every game his team plays to “qualify,” and Liriano has 125 IP in 131 Pirates games. Which means that if he throws seven innings, he’ll qualify for the first time all season. The point is, these guys are among the elite, and even if the name “Shelby Miller” isn’t very familiar, he’ll probably be a no. 2 starter on a team that could make the World Series. And if the Cardinals faithful don’t have a fan section called “Shelbyville,” then I don’t even know why we’re doing this.

There are three American League teams that are essentially on the brink of playoff elimination, and two of them are playing in the Bronx this week. If the Yankees and Orioles want to start making up the gap to the A’s and Rays for the last wild-card spot (the Orioles are 3½ games back, the Yankees 5), this weekend has to be the start of the climb. On the Yankees side of things, it’s a Sabathia-Nova-Hughes weekend, which is good in the sense that the only pitcher who has been decent recently is throwing (Nova), but bad in the sense that Phil Hughes is truly awful and Sabathia apparently lost his velocity while he was losing that offseason weight. Losing two or three here could effectively end all Yankees playoff hopes, but if the Orioles’ situation isn’t quite as dire, well … it’s still pretty damn dire. It’s a scary weekend for fans of both teams.

Ho-hum. Another weekend, another awesome NL Central clash between teams that might meet in the playoffs. When you think about it, the really amazing thing about the Cardinals-Pirates-Reds triumvirate is that they haven’t beaten themselves to death. I keep expecting one team to hit a sudden skid, but apparently their modus operandi is to hold serve against each other and clean up against all other teams. I suppose it helps that the Cubs and Brewers make up the rest of their division, but it’s still impressive to me. The highlight here is the Liriano-Miller duel noted above, though Burnett-Lynn on Saturday is a sneaky-good matchup as well.

It’s the Extra 2 Percent vs. Moneyball! This is shaping up to be a preview of the wild-card game, so I guess that’s fun. Also fun is that if either team gets swept, they suddenly look less like near-playoff certainties and more like something you’d see through your crosshairs, provided you were a Yankee-Indian-Ray. If you are one of those teams, it doesn’t really matter who wins this series, but, one way or another, you’re desperately rooting for a sweep. Anything to bring one of them back to the pack.

Choose your poison, Cleveland: You can try to catch Detroit, whom you trail by 6½ games, or the A’s/Rays, whom you trail by 4/4½. A series win this weekend would be a huge step in both directions, but the problem for the Indians, who have lost three straight, is that their offense has been dead brutal, scoring just three runs in that span. On the positive side, the pitching matchup could be a lot worse against the Tigers — they avoid Scherzer, anyway — and after getting by Detroit and Baltimore early next week, they might have the nicest schedule of any remaining contender. The rest of the season is not exactly a murderer’s row, and the lineup of Mets–Royals–White Sox–Royals–Astros–White Sox–Twins is pretty much the best you could ask for. The Indians just need to survive the next six games. If they can walk that tightrope without falling, the September surge potential is huge.

Why Does Arsenal Need New Players When Emmanuel Frimpong Is Sitting Right There?

6-Day NFL Warning: The Lesson to Be Learned From J'Marcus Webb