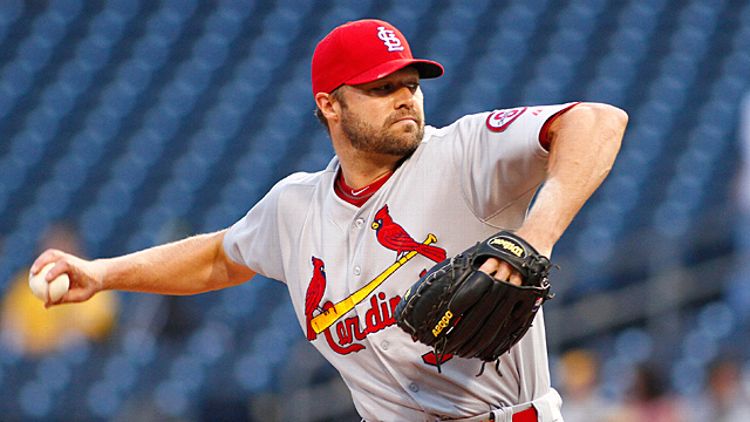 You all know me as a teller of truths, and I won’t let you down now: This is a weird weekend, and it was hard to find 10 truly compelling story lines. Instead, for this weekend only, I’ve picked out the top five story lines and mixed them in with five story lines of pure fiction. If you can pick out the real from the fake, then you are a true baseball fan. Get out your magnifying glasses and deerstalker hats, because things are about to get mysterious.

With their strong starts, the Pirates and Cardinals are in a battle at the top of the NL Central. The Pirates will almost certainly fade, as they’ve done for the past 36 years (rough estimate), but it’s always fun to read about the excitement in Pittsburgh when they’re four games over .500 roughly 1/10th of the way into the season. Despite a 1-2 record, A.J. Burnett is having himself a year for the Bucs, with a 2.79 ERA and a really impressive 13.03 strikeouts-per-nine-innings rate. On Saturday he’ll meet Jake Westbrook, who’s off to his own impressive beginning, with a 1.25 ERA after three starts. What will likely happen here is that both players will walk 10 batters, strike out 11, and the game will end 7-6, Cardinals.

It’s hard to believe the Conestoga Codger has been around this long, chewing on his trademark stalk of wheat in the Fort Wayne Steamboats dugout, but then again, sometimes it seems like he’s been there forever. This weekend will mark the big 10K for ol’ Buckshot, and judging by his career stats, there’s a 13 percent chance he’ll be ejected. He’s never won a pennant, but that doesn’t tarnish his legacy; we all know Steamboats management doesn’t like to pay more than $90,000 for any individual player. And what he lacks in wins, Buckshot makes up for in theatrics. Who can forget the time he brought his Labrador, Barnabas, out to notoriously stingy home plate umpire Joden Byers in the middle of a game, claiming that the dog needed to be walked, and that walking was the only thing Byers was good for?

Everybody loves the A’s because they play Moneyball and succeed despite a low budget, and everyone loves the Orioles because they’ve been bad for so long and we forget that Peter Angelos has actually flushed significant sums of money into the team for years, but most of it has been unfortunately diverted into a toilet that feeds into Baltimore’s inner harbor. Both have started well, and on Sunday we get to see Bartolo Colon, who is 3-0 with a 2.42 ERA and is most definitely not wearing some sort of HGH tank with an IV device under his uniform. (Also, Oakland has the best offense in baseball.) For the Orioles, Chris Davis is one of the hottest hitters in the game, with a .368 average and a .776 slugging percentage. Baltimore trails Boston in the AL East, while Oakland trails Texas in the AL West, and though it’s really early, it would be no surprise to see these teams meet in the wild-card game five months hence.

7. The Montreal Expos Are Still Undefeated at Home!!! (MON-SYR)

I grew up in upstate New York going to Expos games, and let me tell you, I never dreamed the franchise would explode like this! All I remember is a stadium that was 80 percent empty, and the worst baseball fans in world history. Now it’s a sellout every game, Stade Olympique is rocking, the Expos’ front office is spending real money to keep its homegrown stars, and they can’t lose at home!

This weekend’s interleague fun goes down in Detroit, where the best pitching staff in baseball takes on the .500 Tigers. Kris Medlen starts for Atlanta on Saturday, and he’ll have the highest ERA of any Braves starter over the weekend … at 2.16. Mike Minor (1.80) and Paul Maholm (1.03) laugh at him behind his back. They call him names like “Gopher Ball” and “Asshole.” Unfortunately, we get no Justin Verlander or Max Scherzer in this series, but that’s probably good for them, because Justin Upton has been known to cause opposing pitchers to faint. It’s now legal to have fainting couches on the mound, all because of J-Ups. He leads the league in home runs (11), slugging percentage, and WAR, which makes it safe to proclaim him the best hitter in baseball (fine, Bryce Harper and Chris Davis have a case … whatever). Every at-bat is exciting.

5. Angel “Three Thumbs” Fernandez and Pinky Fernandez Become the First Grandfather-Grandson duo to play against each other in a major-league game (SAC-TUC)

This is going to be insane. Especially because Pinky’s dad, Pointer Fernandez (Angel’s son), was a total loser who was crap at baseball.

It’s weird that all of these teams are near .500 or lower, right? The Yankees are faring the best at 12-9, using spit and shoe polish to string together some wins despite having a roster with an average age of 43 and an average injury status of “severe.” But the rest are really struggling, and I have no idea which, if any, will put it together. Theoretically, it should be fun that we have some new names at the top of the standings, but watching this many (recent) blue bloods bite the dust is disconcerting. Also, look at the standings right now. The World Series is going to be either Texas-Atlanta or Boston-Atlanta, right? God, I’m so depressed.

3. 15-year-old Tub Selig Somehow Gets a Start for the Brewers (MIL-LAD)

In a move that has baseball experts baffled, 15-year-old Tub Selig, who has no apparent baseball skill or general athletic ability, will get his first major league start Saturday at Dodger Stadium for the Milwaukee Brewers. The young Selig was recently cut from his high school baseball team, and it’s unclear whether Brewers management is trying to make some kind of statement, or it they’re hatching some kind of publicity stunt. Brewers manager Ron Roenicke seemed unhappy with the decision, but would only say that the call came from “higher up,” an apparent reference to God. Tub Selig is 5-foot-9, 245 pounds, and has a “fastball” that tops out at 46 m.p.h. and a changeup that he throws underhand.

Thursday night, the Red Sox moved to 4-0 all time against the Astros at Fenway Park. Overall, the teams have met just 10 times, and the Sox are 8-2. The only Astros pitcher to get a win against Boston is Doug Brocail, who did it on back-to-back days in 2008 at age 41. He pitched a combined 2⅓ innings in those games. I don’t even know why I’m telling you this, except as a distraction from the fact that Boston is 15-7 and leading the AL East. With a balanced lineup and a solid 1-2 pitching punch with Clay Buchholz and Jon Lester, the situation is starting to get frightening. I have a strong feeling that when Monday rolls around, they’ll remain undefeated against Houston at home. And the worst part is that they’ve got a ragtag bunch of likable misfits. All the poison is gone; it’s almost too much to bear.

Apparently it’s such a hot event that secondary market tickets are going for $600 — that’s upper deck, mind you — and police are preparing to combat a “gate rush” by rowdy fans that, according to sources in the Miami Police Department, is being coordinated on several message boards and via Twitter. It wouldn’t be the first time the notoriously passionate Miami baseball fans have resorted to violence to gain entry for sold-out events; we all remember the “Astro Stampede” when Houston came to town last season, when things got so bad that mayor Tomas Regalado had to institute martial law for six tragic days. I know I don’t have a ton of influence in this one column, but let me be the latest to make a plea for sanity — Marlins fans, we know how much you love your club. But please remember: It’s just baseball.